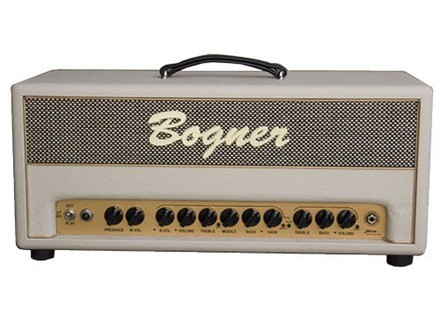 Bogner Shiva 20th Anniversary
5
2x80w amp tubes with KT88.
2 channels, effects loop with two departures for output level "pedal" or "line" (one of the two starting can be used).
Mine has the option more reverb with independent level control per channel.
Footswitch with three buttons: a channel selector, a boost, an activator of reverb.
Can connect a single speaker in 4,8,16 ohms.

This gives a very good sound easy, but it is a rather subtle amp. Explanations:
On one side it has a clear channel with adjustable volume, bass and treble (no medium), a button "bright" and a possible boost.
The other a saturated channel with gain, bass, mid, treble, volume two pots, a bright switch, switch "mid shift" switch and a "modern"
And finally the power amp settings: a general volume, a presence control, control "excusrion"
The switch "bright" are not incredibly effective, especially when the channel saturated "presence" is quite high.

On the clean channel, subtlety comes from the use of boost. Without boost was a clear beautiful with lots of headroom, accepts pedals very well and everything. With the boost, volume +10 dB to take a shot, the sound becomes a little cardboard and dry with less treble. I expected that this crunch channel by pressing the boost. In fact it may be the case with microphones that have potatoes and especially the volume of the channel bottom. Except that if there are pedals in the effects loop you must ensure that the level of cashing out ... From a musical point of view it can also be embarrassing to pass a clean at the correct level to a much stronger clean ...

So this amp has a great clean channel with a sound very generous. two settings allow to pass his slap sounds thicker carefree.
The only comparison I have is the Canadian Brunetti a clear star-t-rack manufacturer known for its beautiful clear the brunetti is a little less wide in low and has a kind of resonance to 1-2KHz which makes her a little colder and aggressive, shiva is a cut above and offers a softer sound and singing /

With the boost on the clean channel it is in "plexi" on the edge of crunch. This is less beautiful but more "in your face", less treble, clear sound reminds me that we can get an Orange. Pushing the volume of the channel bottom that crunch so nice, great for pop rock nervous.

Without modern fashion, it goes nice crunch to distortion good fun, with a fairly tight grain and very British (for an amp made by a German American, but where are we going?!), This channel is ideal for older of us who are starting to have the blues or young hypsters fan of British pop. We like to play the good old led zep or big popa chubby good with this mode.

With modern fashion the gain increases by 2000% and the sound becomes a little more bold. The one that goes the distortion saturation devastating kills (or vice versa), lowering the gain you get a crunch dirty and ugly. This mode is perfect for precise our furry friends or lovers of extreme sounds bats or coarse. Depending on the settings, we find ourselves in the good old Metallica (90's vintage), the Deftones, fat, sounds good with Doom too low etc, but always with a great precision ... Note that is is not in a registry hyper brutal covered by another head of the brand ...

In both cases the equalization is super efficient and small switch "mid shift" plays a very important thing to dig Eq.

The presence control allows you to switch sound "very, very dull" to "ultra-crystalline".

Pot "excursion" can play at low volumes without losing low (And despite his 90w there is no problem to play low-level apartment, even if it is a shame).

On channel saturated the "boost" unfortunately does not allow to switch between modern "normal" mode, but switch from one setting to another volume (note: there are two volume buttons on the saturated channel! ). And therefore convenient to leave the mix alone.

I use it for a month in fact. I was immediately captivated by the extent of the range of sounds, sounds beautiful clean tones, saturation settings in short, everything that makes it a very versatile head.

However, flexibility has two limitations:
- The operation of the boost on the clean channel, prevents the simultaneous use of two colors available unless you want to jump considerable volume.
- Control "modern" is not accessible from the footswitch ...