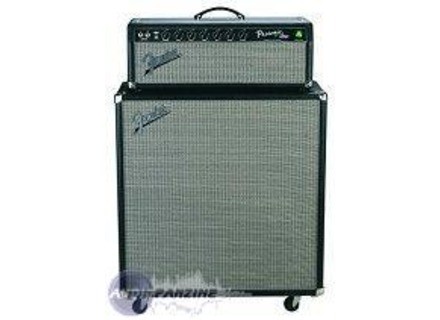 Fender Prosonic Head
5
I had bought 2 Mesa Boogie amps & a new Fender Pro tube reverb amp this year and was never satisfied with either of them. Then I stumble accross this Fender Prosonic amp that was in like new condition. I traded my new f-series mesa in on it at a even swap. They had a tag of $899 on it.

I like the switchable a, ab, ss rectifier. This gives a power rating of either 30, 45, or 60 watts RMS. In the class A setting it has an outstanding sound like the old original tweed rectifier amps. The tone controls work in a unique way in that you can turn the master control all the way up and with the tone controls set very low you can play bedroom quiet with natural power tube distortion. It has about the best clean channel I have ever heard for my taste and playing style which is bascically blues and rock. You can really go over the top with the double cascading gain channel which retains much of the clean channel sound only on steriods. I have finally got the sound I had been missing from those old sixties amps I use love. Great reverb sound also.

The only thing i don't like mainly is Fender stopped making them for some dumb reason. Some might would like separate tone controls for the lead channel but they work so well as is I don't mind.

The construction and quality of the amp is high quality.

I is the best amp I have owned in many a year and I have had quite a few different amps. It is clear and articulate and smoothe and creamy sounding. Notes really leap off with ease.