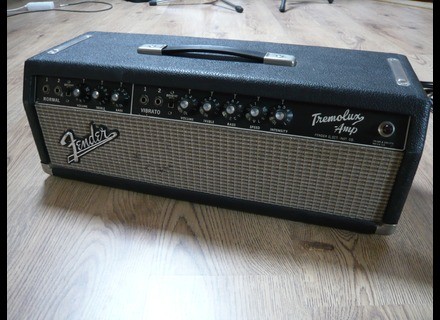 Fender Tremolux
5
The Fender Tremolux 62 Blonde is a guitar combo amp when used in tandem with the original speaker cabinet.  The amp is a tube based on, consisting of two separate channels and built in tremolo.  Each of the two channels has two 1/4 inch inputs and there is a speaker cable 1/4 inch output in the back to hook up the head to the speaker.

Using the Fender Tremolux 62 Blonde isn't hard as everything is pretty straight ahead here.  The parameters should be very familiar for those of us who have a lot of experience with Fender amps and beyond.  Both the first and second channels have basic parameters for volume, treble, and bass control, and then there are parameters for speed and intensity for the tremolo.  That's all that there is to the amp, so a manual certainly isn't needed, regardless of the level of experience you've got.

While it has been years since I've recorded with the Fender Tremolux 62 Blonde, at the studio that I used to work at I generally used a Fender Strat and no effects with the amp.  I found that I was always able to get one of the cleanest sounds I've heard from a guitar amp, as its great for both rhythm and lead guitar parts.  The tremolo effect is the best of its kind that I've ever heard, and I'm not exaggerating!  It sounds that good.  Even beyond this incredible effect, the amp simply has a great inherent tone that could maybe only be rivaled by another Fender guitar amp...

Since using the Fender Tremolux 62 Blonde a number of years ago for a few recording sessions, I haven't had the chance to use another one of these since then.  As most people know, it doesn't get much better than the sound of a vintage Fender, and the Tremolux is cream of the crop.  I don't have any idea what these would go for if you wanted to buy one, but I would imagine that it wouldn't be the easiest amp to get your hands on.  If you're ever in same room with this amp you need to use it or I promise you will be kicking yourself later...

tonio33's review (This content has been automatically translated from French)

It has the merit of being clear. No superfluous.
We obtain very easily a good sound, just the legend on and Fender is there.
No manual, bought used. But there is no need.

It is ideally suited to the type rock / country (Dire Straits) by way of the funk to good rock crunch by pushing the volume.
I use it with a Start or a US godin artisan STIV.
With the normal channel we obtain a well rounded and well filled at the level of bass that is very suitable for solo guitar intros, bright-channel sound is very crystal-clear changes to the fuzzer phrasers sultan of swing a pure pleasure.
By mounting the volume from the sound becomes 5 Overdrive crunch arrived to see 10 with a powerful microphone.
The sound of this amp is really beautiful. Some say it lacks a reverb, I will answer that he needs a big piece to express (at least 40m ²)

I use it for over a year. Repeat, Concert, Bar.
I like the amp that sounds as soon as the branch and he actually left.
I tried a lot of amp, telque of twins that I find far too exploitable power level.
This choice? surely! Amp all lamps, exploitable, with the pure Fender sound is on!

See all 99 photos of Fender Tremolux »