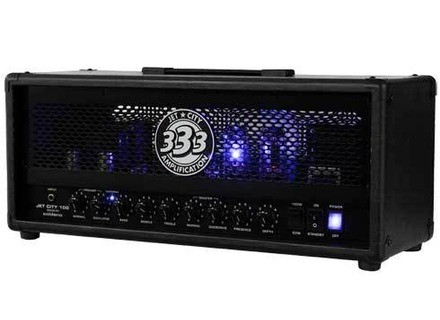 flying-v's review (This content has been automatically translated from French)" What else?"

Config very simple, super effective after amp mod (I'll after ...)
This head is very versatile, it goes from clean to high gain without worries.
Manual?? Not worth sacrificing a tree for a totally useless instructions!

In reality, this amp fits all style and perfectly reproduces the texture of the guitare.Un his right and very punchy with my flyng-v (EMG81), more round and fat sound with my Les paul (EMG81) and its totally different with my telecaster (hotrail.) In short, it respects the color by adding a Soldano touch '! circuit the clean channel is similar to that of SLO100 and the Drive channel similar to Hotrod100 +.
Thank you SOLDANO MR.

So to clarify the mods I've done it: clean channel: Adding switches clean / cunch and bright with Edit the circuit level gain knob and the filter clean.
Channel drive: Modified input resistances and gain circuit based on the SLO100.
Lamps preamp: JJ 12AX7 Tesla lamps powers replaced by a quartet 5881WXT home SOVTEK (similar to mounting SLO100) BIAS setting..
Result the head is much more clean and accurate, it is very close to the legendary sound of the Soldano.Niveau gain, I play metal "old school", I do not exceed 3.5, pure high gain.Attention must still Remember this is a low cost made in china head, but designed by Mike Soldano.Ca American sounds at will, without going into exaggeration, but he must love the 'grain' Soldano.
The clean, after mod is very good, we play Mark Knopfler carefree, only downside équalo common to both channels so you have preferred the clean .... or drive damage.
If it again, I persist and sign, I buy even two!
For about 500 € and 200 € modif was an amp that overlooks widely marshall and other low vacuum cleaners.

Jet City Amplification JCA100HDM
4
The Jet City JCA Chinese 100HDM is composed of five 12AX7 preamp in and four 6L6 power. There are several speaker outputs for various combinations, an effects loop, an input. Question setting was a common EQ, two channels (here called crunch and overdrive), a gain knob and a volume for each channel. The big difference (on paper) with the JCA 100H, which probably pushes you to this model, firstly the Depth control, a kind of resonance, dear lovers Soldano to address the weaknesses of the low cab on other than the brand, and the power reduction, since can switch the amp 50w.

On paper, it's all good, it offsets that could regret the JCA 100H that I personally enjoyed.

Some also enjoy the look, much soldanesque, modern, shimmering with blue LED that passes through the grid ... At the risk of being for a little taste, I prefer the usual facade, which I changed the horrible blue vinyl.

In terms of use, nothing more simple. The manual is a bit bloated, but delight newbies in that it is actually a FAQ ... It therefore meets all the questions that arise, but the functions of lamps preamp ... grrr!

Here, the clean channel is called crunch, but it offers the same level of drive than the normal channel JCA100 H. So no need to tantalize on him rather than JCA100H that way, even if the drive that you draw is very nice, very dynamic, and more pleasant that cleans a bit flat.

The 50w mode does not give you the feeling of playing softer, and will not save you from the neighborhood fussy. It is in the volume of live game will feel the difference, though the difference made in the bottom, clean as saturated, is modified. It will be a matter of taste. The Master being very effective, I prefer to stay in 100w.

Well, you'll understand, I expected to have a JCA100H upgraded. Depth to zero, we obtain a balanced, more balanced in any case that the JCA 100H and very pronounced treble and lacking a bit of body. Pushed to noon, Depth adds body, dimension to the sound. In addition, it will serve primarily to compensate for the weakness of a speaker. Not sure that you save with a baffle of this brand-said ...

On the clean ... identical to the JCA 100H! A bit less bright, perhaps? It is confirmed by engaging the overdrive channel. We kindly takes for the gain to 6, which is enough for a good beefy distortion that lets legato with ease. The Depth function is not radical, but lets charpenter the body of his. As the JCA 100H, will tend to decrease the treble too far, and quite aggressive with origins lamps.

I was expecting a perfect JCA100H. Well no. As in Soldano circuit intervention influence on its functions. I find a more fractious right amp harder,. Although it is not exactly right, I rapprocherai that the difference between a SLO 100, very 80's and Hot Rod (plus, in this case) more modern. It is a matter of taste, but this is not really the distortion a little "chewing gum" of JCA100H, even if it is very close.

I can not hurt rated this amp. For the price, it's really not bad, and it brings misery to Blackstar, and many others. Well, if your trip, thinking Soldano is Van Halen, Extreme, Gary Moore, better ogle the JCA 100H, although it is hard to find. on the other hand, if you have the idea to also make the metal or the more modern JCA100H still very strong 80's, then the sounds JCA100HDM is a great option. The gain is set, Dante, the more balanced sound and thus stick more with the canons of the genre. I am over 80's, and I had my way. But at this price, I can not put it badly.