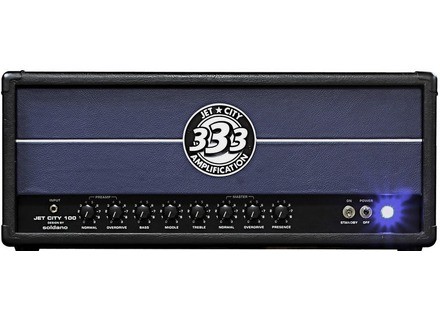 Jet City Amplification JCA100H
4
Jet city amplification is a no nonsense versatile and budget friendly amplifier. They've taken the philosophy from Soldano has to keep it very simple. They have excelled in making some of the most budget friendly and inexpensive amplifiers in the market today. This is a two channel amplifier that takes a lot of inspiration from the Soldano amplifier tone.

If you like the tone of the Soldano SLO and you will like the tone of this jet city hundred watt amplifier. The first channel is a good shiny shimmering clean that can get a sparkling tone. The second channel is a thick and raunchy distortion tone. If you like a good 80s tone then you will be set with this amplifier. If you like in new modern metal tone then you can get that with just a quick shift at the control knobs.

These amplifiers are some of the most budget friendly consumerist amplifiers on the market today. You can find these amplifiers at new for the price of $699. That is an excellent price for excellent sounding guitar amplifier. I would highly recommend this amplifier to anyone who wants a good solid 100 watt and inexpensive amplifier. This is a no-frills no nonsense amp with no trick marketing tools to back it.
Did you find this review helpful?yesno
»

kaoslord's review (This content has been automatically translated from French)" Jet City hat!"

there is no simple! manual: unnecessary
one branch is heated 5 minutes and ops is partly
kill your drummer or tear the wallpaper, if you are at home.

before talking about sounds must say that lamp replacement preamp is absolutely necessary. with original lamps (12AX7B) the sound is average.
the clean is not bad (hot and slamming) but the sound distortion is too fat in my opinion, the bass do not work well and there screaming treble.
So: turn 12AX7B quickly, or else keep them in positions that do not affect the sound too (V3, V4).

the amp a very simple design and its changes with surprisingly different lamps used. For my part I found my happiness with:

ITS CLEAN: the clean channel remains clean longer, you have to play with gain between 2-3, but enough to turn the master, the reserve is the headroom (100W to thank you and big transformer).

low gain and thanks to the 5751, I get a clean sound with powerful bass and treble fine. with single coils and a little reverb is wonderful. all my pedals (OD, distortion, boost) sound great through the clean channel.

still in the clean channel and password q'on gain level 5, the beast turns! small farewell agreements, and welcome to the big rock-blues. The Stevie Ray Vaughan fans will love! This JetCity a huge potato in medium-low frequencies with a fabulous warm grain is pure happiness! With a Strat is THE Texas Blues, and a Gibson is furious ACDC.
With the clean gain MAX is the killing, it seems that HP will melt so the sound is round and warm.
The clean channel possesses a great dynamic with gain knob to 5 Bassez the volume of the guitar to get a nice re-clean.

LEAD CHANNEL:
Take the lead channel gain level has been allowed in the clean channel but it is more saturated and sharp.
The sound is really big rock in the spirit of the Soldano.
Headroom is impressive, even with a 5751 in V1, needless to push down the knob. Gain 5 is the large stoner rock sound, gain 8 is the ITS groups deathmetal 90s.
It is nasty, big, bold and powerful, but you can hear every note, the amp is never garish. You can also boost pedal with OD (is this-that there really need?), I amused myself with my old HM-2 and ITS Entombed is assured.

IMPORTANT: The MASTER is very well designed - no need
to push too high (and tear the wallpaper!) to get a good sound.
it is very good to play at home.

I like:
simplicity
the clean channel, versatile and powerful
the large distortion and channel its huge lead
the look (I've changed the blue sign for a black grille)

I like:
the effects loop (some pedals do not work).
its weight!

The price / quality ratio is simply UNBEATABLE
Fans of SOUND large (whether of large or heavy metal blues) go for this brand, you'll love it!

Le Taz's review (This content has been automatically translated from French)"Hefty for the price!"

The head is not too heavy for a 100w lamps. It&#39;s made in china, but the assembly is very clean and good quality components (for the made in china). So no reliability problems on the horizon, Mike Soldano would not let his name affixed on an amp that slap in 6 months, like Bugera.

The configuration is simple. Perhaps too, for some uses. Found its sounds very easy, but it must accommodate both channels with the same EQ and reflect the lack of master volume.

Similarly, the two channels not behaving the same way, it will probably have to compromise on equalization, the clean channel is a little more bright than the overdrive channel.

No need for manual anyway. A pair of ear and a little common sense can make the adjustments.

The clean channel is not really extraordinary. Despite 6L6, do not expect most of the Fender or even Mesa Mark "Kekchose." Enough to rock some arpeggios. If you are looking for a deep sound of Mark Knopfler or Gilmour, do not forget to pick up supplies, the road will be long: it is not made for this. But I did not say "not for the blues." This channel has a secret weapon is that crunch, and crunch very well. AC / DC, blues rock, rock to the rhythm right, no problem, with the advantage of being more accurate than a vintage crunch, with more "bounce".

The lead channel takes over in terms of gain. We crunch right now, but with a more smooth, less British, more U.S. more ... ben Soldano anything. With my rapes go beyond 6 has no effect, there is a huge saturation. The difference between a small gain at 6 and 10 is lighter, but probably due to precisely match the guitar plugged into the machine. I usually put the gain around 4 or 5, supplementing with a booster for solos, just to have 2 levels of saturation in the foot. But, plug&#39;n&#39;play, a volume knob suffice.

You&#39;ll understand, it&#39;s the channel of the device. Distortion to the Soldano: compression U.S. was this feeling of smoothness, but in any open grain. It does fuzze ever, even with micro guts, spit it just enough for rock&#39;n&#39;roll. on the other hand, do not expect the subtlety of a soldano in the transcript and transparency of the sound. This is the idea we have in fact: a supercharged Marshall, more accurate and compressed / smooth. It will not all blues, but for the big rock and hard without worry. For metal, the amp is basically a little bright, it is difficult to dug the sound, even if it behaves well with extreme tunings. Up to you, but I do not believe too, except to slam some rack effects, including an equalizer.

A small tour of the 12AX7, with changes in v1 and v2 can even adjust the sound, even if there is nothing radical. If transformers are not bad, these Chinese lamps are generally bright, highly saturated and imprecise. Small tung sol, or even a 12AT7 in v1 already cleared and balance the sound. The JJ are great in v2. I loved it with a Sylvania NOS.

The only problem with this amp is to want to use both channels at most, knowing that equalization is common unfortunately a real drag. Channel 1 offers a pushed drive british very bright, much more than the channel two. So except to make some MIDI with an equalizer presets, they prefer to use in his clear, although not extraordinary, given that channel 2, although very typical rock / hard rock saturation offers us more singing, but not clean or even crunch exploitable.

I insist on the appearance U.S. Soldano, this head. It is certainly not versatile. But if you like the big Californian rock (Van Halen, Mr Big, Chickenfoot or whatnot) it&#39;s really a great deal, it is more comfortable as well as some more expensive amps, and access a universe normally expensive amplification (VHT, Soldano, etc.) that nobody else offers this award, relativizing also the fact that this amp is paid 2 to 3 times cheaper. If it is not as accurate, subtle and precise as its inspiring on the value, it wins hands down.

I did more, for lack of money, but surely redeem this toy. At that price, it would be a shame not to. In this segment, if it is not versatile, the projection quality, dynamics, texture saturation left behind the amps as well Blackstars range. However, these will be more versatile. I prefer the grain, and I actually preferred this amp head AFD, and at the same price, I would do this choice.