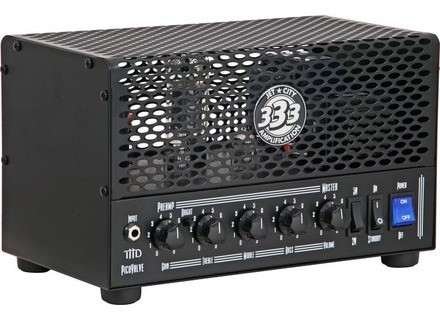 Jet City Amplification PicoValve
3
Jet city amplification is sort of a spin off from the Soldano amplification builders. Andy Marshall designed this amp and his license by THD electronics. The pico valve head os low wattage and an extremely versatile tone machine. This amp features some of the best and newest technology that amplifiers have to offer. It has 5 W of power and you can also change the power tubes. You can switch power tubes in out with re-biasing, depending on your flavor and taste of different power tubes. The five watts can be cut in half with a half power switch on the front chassis panel. This will give you better control volume levels when playing any cramps base where you have noise issues involved.


The tone of this aunt although 5 W still packs a huge game punch. It has a full tone stack of trouble middle and base controls. This amp although only 5 W has enough game to satisfy most practicing situations. You can even roll down much of the pregame to clean falling levels. Even with the pulling down under guitars volume you can achieve a good solid bluesy clean tone.

This amp is housed and licensed by THD which looks like a little lunch box. It is a small and compact amp which is inconvenient for most players. It also has a bright switch an tight switch to add some of the higher frequencies to be up at cut through some of the cloudy distortion to which some amplifiers can half. What is interesting about this amp is where most amplifiers control knobs go all the way to 10 and even 11 sometimes, this one only goes to nine.

These amps are fairly inexpensive and they come in at the new price of around $299. That is a very good price for a high quality amplifier. These amps can be found online and in most guitar shop retailers. These are some of the most versatile and inexpensive amps in this price point that you can find. I highly recommend this and if you're looking for a low wattage low convenience and easy price amplifier.

Apparently this amp contains a wiring error see discussion TheGearPage https://www.thegearpage.net/board//showthread.php?t=966529.
I did the mod: add 1M ohm resistor between pin 2 and 9 (the least), and it gives a good while in his base is a bit mashed when it distorts pretty.