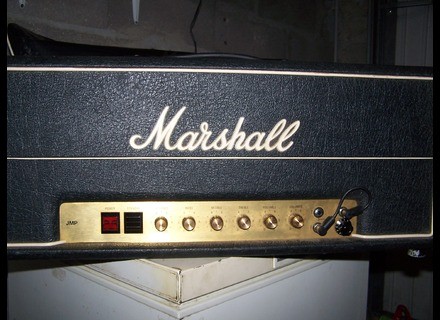 Marshall 1959 JMP Super Lead [1967-1981]
5
Marshall is one of those amplifier companies as really stood the test of time. They probably easily one of the most recognized amplifier companies in the world. They're mostly used from pop all the way up into metal music. They do have a particular sound and feel that is unlike any other amplifier in the world. If the classic British tone that is inviting in vibrant to say the least. This is one of the all-time best amplifiers that it's ever been built.


This amplifier has such a great sound and anyone who has ever been around any type of music knows that the Marshall plexi is just one of the best. This amplifier is basically two channels in one. You have a higher low input for each channel so that gives you a total of four possible guitar to put plugs. Each one of these channels has two volume controls. This is a non-master volume amplifier so in order to get some crank distortion or overdrive you really have to crank the volume out of this amplifier. Of course if you're an apartment or small home this is not easily doable. So therefore you will need any attenuator or some sort of modification to get the amplifier to distort at lower volumes. This can be done quite easily if you push the front of the amplifier with an overdrive pedal such as an Ibanez tube screamer or a boss SD-1 pedal. Or you can or you send it out to get modified by many of the online amplifier modification specialists out there.


These amplifiers you can find new for right around $2300 or so. That is a decent price for this amplifier and certainly one that might be a little bit out of the budget range of many budgeted musicians. However you can find these all day long used very easily for probably less then half about. I have seen them as low at $100 used so I would go that way on this amp.

Marshall 1959 JMP Super Lead [1967-1981]
5
This is about as classic as you can get when he comes to the marshall amplification hundred watt amps. This is such a great sounding amplifier and is a great platform for modification and high gain territory. These amplifiers are probably one of the most heavily used amplifiers in all of pop, rock, and metal music. They're extremely versatile in their tone and they cover a wide range of possible musical styles with just basically one channel. There isn't a whole lot of extra features that these older amplifiers have compared to the newer production models. You basically have a presence control knob, bass, middle, travel, and then your volume controls for each set of high and low inputs with the dark and normal input. They are very standard type of amplifier that is a great platform to use effects or modulation or any type of overdrive boosting pedals.

No manual is require and probably hard to even track one down from the early 70's However, you don't need one to get this thing up and running. It is as basic as it gets.


I absolutely love the tone of these amplifiers in a loud aggressive setting. These amps have such a warm and articulation that is extremely comfortable to play and makes your notes of your guitar just jump out. there is a warmth that comes with Marshall amplifiers that is very different from a Mesa boogie or a Fender amplifier which are probably the top three amplifier production companies in the world. I would probably say that Fender is the biggest and then a close second would be Marshall and then a Mesa boogie would be the third most popular heavily used amplifiers. The Marshall has a distinct tone that is very different than most Fender amplifiers but really it takes a lot of its influences from the Fender bassman amplifier. The large majority of the circuit is a reflection of that original amplifier with some new modifications at least for that period of time when Marshall was building these amps. These are great sounding vintage tone amplifiers and they are excelling at giving you a perfect blend of frequencies that compliment most band mixes.


With the market right now the way it is with people not really purchasing gear as much as they used to be. These amplifiers you can find pretty inexpensively just a few years ago. They are heavily cycled and pretty available if you look throughout many classifieds and especially eBay. If you give enough time you can probably find one that's a really good condition that will fetch a little bit more money but there are a lot of people that are just simply dumping these older amplifiers for newer production amps that have multiple channels with different bells and whistles that are more applicable to today's modern music.
Did you find this review helpful?yesno
»


The tone of these amplifiers are fantastic and if you have a good overdrive pedal with maybe some effects modulation such as a chorus, delay, or a phaser, then you can get some great singing tone and effects tone that will mix very well in most band situations. There isn't a whole lot this amplifier cannot do when combining it in a nice pop, rock, or even hard rock band setting. These amplifiers are great platforms for getting a general tone that is widely excepted and sounds pretty good in most applications. Overall this is a great sounding amplifier and have a great vintage tone that also can sound very modern depending on how you set the cues and what type of the effects from your floorboard or your rack units can come up with.


You can find these amplifiers pretty easily and most use classifieds section. It's very common amplifiers and we're heavily circle circulated during its time of production. These are great amps and right now if you can get great deals on used gear because a lot of people are not buying gear these days I would recommend this amplifier to anyone who wants that vintage type tone with an EQ section that is very easy to dial in a good sounding guitar tone with. These are fun amplifiers and just a classic amplifier for most musical applications.
Did you find this review helpful?yesno
»

Marshall 1959 JMP Super Lead [1967-1981]
5
Marshall amps are probably the finest amplifiers for the hard rock and metal type guitar players. They have a great tone and are very addicting to play. These are probably the most iconic and easily recognizable amplifiers and all of music. The only thing to come close is maybe a Fender bass van or twin deluxe but nothing stands the test of time or the hard rock feeling tone as a Marshall amplifier.


These amplifiers are very well designed and sound phenomenal we really crank up. Unfortunately the amplifier to find a lot of volume to really find that good sweet spot. Unless you use an attenuator and you really have to crank these things up to get those tubes burning and firing hot to get that sweet British flavored tone.


The Marshall amplifier sits very well in a band mix. Probably will be because it has a very good mid range voicing due to the EL 34 power tubes. This amplifier sounds really great if you get it modified to get even more again and saturation. The Marshall amplifier in general is a great platform to be modified and built upon. Many guitarists have used these over the last few decades because it has a great sweet warm tone that is very complementing to the band next.


You could find these guitar amplifiers pretty much anywhere. They're extremely popular but depending on what year you buy it will determine how valuable it can be. There's a lot of boutique amplifier that have copied and redone the Marshall flavor which sometimes sounds a lot better but you're going to pay more in premium prices to get that. These guitar amplifier sound great if you use a good overdrive pedal to throw in front of to get that front end of the amplifier really cooking. So if you have a boss SG one pedal or a tube screamer from Ibanez and you're going to get a really good hard rock tone with that combination.
Did you find this review helpful?yesno
»
Read the 15 user reviews on the Marshall 1959 JMP Super Lead [1967-1981] »