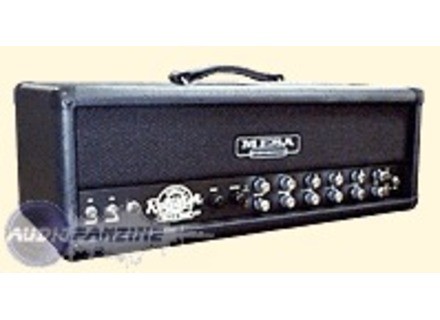 capitaine_banane's review (This content has been automatically translated from French)

Mesa Boogie Rect-O-Verb Head
4
Same thing as the single-sided but with a reverb, a rglage per channel on or off via the footswitch.

Like all front, it is not empty her to find her, because all the knobs Intrag them (eg by changing the treble, mids are modified).

Nanmoins even when it's a great base with SETTING THE (all afternoon), is spending a few hours to really find the ITS.

Too bad the modes are not DIFFERENT foot switchable.

Unlike what you may believe, in the front can provide a lot of music styles, so it possde some versatility, but beware, there is still the signature sound of the front, which can recognize 1000 km. We like it or not, personally I love it.
The sound is warm, rich, full, rich, excellent solos in saturated or not saturated with the DIFFERENT ways (raw, vintage, modern, at least saturated and compress to compress more or less saturated .
You can play blues, rock, metal, death of trash, neo ...
At the bottom of saturation, it may seem a bit messy and runny, just reduce the gain, rgler it right and it fits, but its face is this: a fat, drooling a little , warm.

The sound is clear trs medium, flat, straight, I sold mine because of it.

The reverb is not great and sounds like a machine lav I find, so preferences move towards single-sided at all.

I got it for 8 months, the APRS trying qqun in 10 minutes. An amp like this does not identifies 10 minutes, it takes several hours for an ide of possibility. If the clear sound n'tait not so ugly (but nanmoins trs utlise even when a non-amateur clean) would be the ultimate amp.

I have not tried other ampis the era, but now between Isaiah j'hsite something else or buy a dual-sided, certainly more expensive but more possdant possibility.

For mtalleux seeking only the big sound is the MODEL privilgier.
For those who want a little more versatility, taking plutt a dual recto.

Ha yes the price quality ratio is not great, buy plutt of OCCAZ or on the Internet
Did you find this review helpful?yesno
»

jipav's review (This content has been automatically translated from French)

Mesa Boogie Rect-O-Verb Head
5
Good lamp in mesa!
Everything has already been said about the characteristics of these amps ...

Very easy to use! It sounds in every case!

The sound is really crazy ..... in clear sound with distortion (and all that there are between) c is madness!
j used this head with a 1960 (for me a true baffle the crap ...) and ca sounded despite the invalidity of the cabinet! the guitars are for qqqchose: esp Kirk Hammett (active pickups emg 81), Gibson Les Paul Custom, Ibanez Universe Custom (Seymour HS6 and sh2)
important point for me, the two-channel models of the range correction are really much better than the three-channel models ... It s the acting head of the single, then necessarily c two channels. J had the range correction, and the head was my favorite (with a triple but was much, much too powerful)
Oh one last thing if the reverb, I find it beautiful! It is very typical of c is, c is in addition to having a digital reverb, but frankly, I find that it sounds great with clear sound, c of the ball!

J've used this amp for 2 years, but it must be 6 years that I play the correct amps, in fact, I have also had the dual and triple heads, and the combo.
I finally stayed on the combo that makes less noise for my neighbors ... and as I did more than repeat or live ...
In any case, I have much preferred this to the dual head that sounded much less (ct Model 3 channels), which had crappy components (plastic knobs 2 balls not solid at all), which was mostly too fragile.
j I really regret to have sold the single to dual ...
J had a triple for two weeks (I was the prettée was waiting for my dual is repaired because it was often the repair head ....) j've found the right sound from the single (two-channel model) Obviously with a lot more power!
in all cases, c is an amplifier of madness is nothing to complain (except for a three-channel models made recently with an economic policy from mesa which is unacceptable). j currently have the combo, I am very very happy, the sound is really perfect, except when I pushed a little too (because I start to do the rehearsals and recordings, he will have to be can I pass on a head but with the cabinet mesa that blow it!)
Did you find this review helpful?yesno
»

Bumblefoot's review (This content has been automatically translated from French)

Mesa Boogie Rect-O-Verb Head
2
Lamp apellation correct but usurped!! because there is no lamp grinder (comercial ploy to sell better!)

I played with for 2 years with a huge sell it badly !!!!!
aus tyle music so it could corespondre but good when it does not crash the front ... the same word or series that are 50 watts correct a lie publiciataire relatively often falls down! and not just mine all those I know who have had this head had at least one problem in the time it took!
For me it was the master button knob whose track was dead ... then you tell me there's the change! yes, except that this button is not a knob like the other and asking the importer and must attednres bin for months and months to get one!!
Once the problem is arranged so that trasfo Crame ... this amp is a real DUMP! and if I support my opinion as it's just because I'm not the only one to complain!!

cleans the sounds are awful! and saturated sound a bit better! even if it is unable to correct its true!
the true correction begins with its dual and triple models! but especially not single!

to have had no correction with the famous TREoVERB Dual Rectifier solo and with his two relatively similar saturése! well I can attest that the single correct it rectoverbe Series 1 or Series 2 is the series of amps from Mesa deserving more jeutter be in the trash!

chrisberg's review (This content has been automatically translated from French)

Rglages handling and use simple for me!
plutt or the sounds (all middle) without problem, the real sound (for me!)
the manual is not bad at all (for once), but hey we can do without

The two channels are great, sound palette (not yet had time to do much testing)
ample of any obviousness, no need to look 24:14 hours.

I tried the normal single-sided, have found it great! but it's a more open my ears. + Reverb is nice as hell. Believe that the amps are not all alike?!
j'apprcie the freedom of his! I not understand the criticism ngatives, but hey it is the taste of all of us biensr! I possd other amps, I also love that a ditto Orange, well this Recto Lock it in my heart ct tops!
The price (I pay 1769 Euros) is expensive, but all that stuff l!
I found the what I was looking with this amp.
Did you find this review helpful?yesno
»
Read the 8 user reviews on the Mesa Boogie Rect-O-Verb Head »