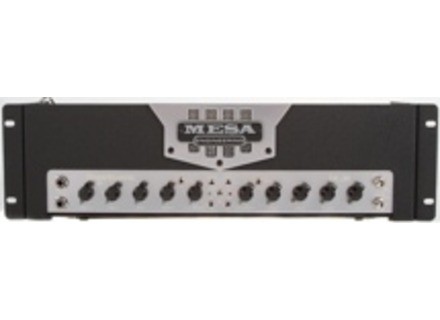 Mesa Boogie TransAtlantic TA-30 Rackmount Head
5
What will Mesa Boogie think of next? These amps started out as great lunch box amps for the on the go musician. They have been so popular that now they are offering them in a high watt version and in a combo version as well. The tone of this amp is remarkable. With the ability to go from cleans on one side of the amp and kick it over to channel two with the option to have another clean or crunch and even high gain mode is fantastic. This is the rack mount version of the regular standard amp.

The first channel is primarily the clean channel but if you give it a little juice you can get a nice Fender breakup and then take it even further for a sweet Vox Ac30 type tone. This is great rack mount for someone who doesn't want extra space for a head or combo amp.

The second channel has a Tweed, High gain 1, and High gain two. It also has a boost function on the gain. You can turn this on an off on any mode. The tweed is a Fender type tone and the high gain 1 is a British type voicing. The final mode high gain 2 is more of the Mesa style lead and rhythm tones.

These are great little amps for the money. They aren't cheap but will give you an array of tonal options. At new these amps come in at around $1499. This might be a little on the high side for this amp but still a decent price for what it was.

I would recommend this amp to anyone who needs a good gigging amp that will not be a failure on stage. This is a also a good amp for recording some various tones. The distortion is not going to be anything like a Dual Recto so if you think you'll get that tone then save your money. I recommend trying this amp out first because it is a bit different then the standard Mesa tones you have come to know.
Did you find this review helpful?yesno
»