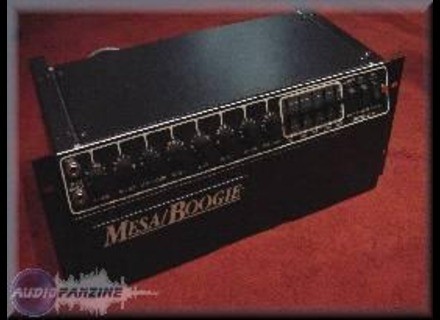 tchango's review (This content has been automatically translated from French)

Mesa Boogie Studio 22+ Head
5
All Tube Amp (marked "Class A Power" on the rear panel), 2 and 5 12AX7 EL84, 2cannaux switched feet, dlivr to 22W, but beware, it's stroides watts, I will discuss later.
On the front we have the basic Master Volume (Gain in fact), Bass, Middle, Treble, Presence, Reverb, and icing on the cake, the qualiseur graph that is a marvel.
At the rear, an effects loop effective (send / return), between one and one for direct input to a speaker in supplmentaire 4ohms.

I do not put that nine common cause of legalization.

The Mesa rputs often be difficult to settle for this amp it is a dream. It is the stand by, is heated a little, play, and BAMMM! The Slap! With the legalization of all 5 pots, you sound! You catch yourself playing for hours and hours on it so it's enjoyable.

The clean sounds are beautiful, rich deep and expressive, the crunch dark blues and will vibrate the most demanding, and the distortion, well, my faith is the Mesa / Boogie. It's beautiful, fluid, harmonic and gorg characters.

Some regret the lack of a spare legalization for each channel, there is a parade Maisl thanks qualiseur the graphic there is a switch that allows either the trigger on channel 2 or the saturated or the clear, and it was the only becomes interesting. We can do its rglage with pots of the amp to sound clear and activate the switch to the graphic qualo saturated, so that when we move into lead, it has two sounds diff ent!

This amp should all styles of music, no problem with the qualiseur we dispens limits, in addition to the amp is very ractif the type of lights you would put: with JJ in preamp, you will have the typical sound Boogie Mark 1, with Electro Harmonix Sovtek or LP, you will have more gain and a "brown sound" stunning, with lamps and high gain, you will have the Mark 2 ( you know the amp used by Metallica "Ride The Lightning" "Master Of Puppets ".....

I have a Les Paul Standard and a Blade RH4, both sound diffrent and affirm their characters in this combo.

I forgot: I played rpt with a friend who played guitar on a JCM800 50w, and I had no trouble making myself understood, however. As I said a "sounds" much stronger than 22W "normal".
If you want your walls dmolir, brnachez it in a 4X12, and you will remember for hours.

I jou on the Rivera, the Twin, the JCM, but if I had not had a grader would be it, without hsiter.

The report price is unbeatable quality for the award in time, you will find no better, or complete and versatile. And one thing that marks too, it's light weight: a dream move, it is lighter than a Classic 30 for example, or that some transistors amps!