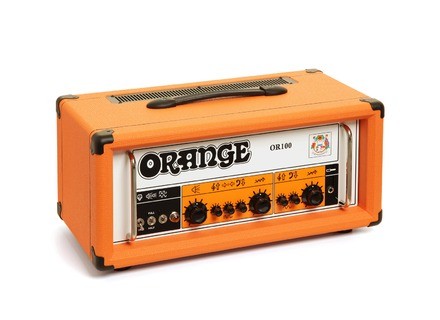 OR100 2013 Edition, Tube Guitar Amp Head from Orange in the OR series.

be23's review (This content has been automatically translated from French)"I dream in Orange ..."

Orange OR100 2013 Edition
5
Well, it is she got the head! I hesitated a lot before changing my mind TH30 I was crazy yet, but want to own an Orange Made in UK was stronger.
I hesitated between the Rockerverb 50, 50 and the Thunderverb OR100 interest here. Needing a real clear, but also to play mode and 30 watts in rehearsal for small concerts canal, OR100 is imposed.
This is a head made in Orange UK, 100% tube, developing either 100, 70, 50 or 30 watts via two ingenious switches (2 or 4 lamps for power stage for the switch on the rear panel, and switch to the standby switch to "full" or "half power" on the front panel).
The clean channel is a "non-master volume", ie the single large knob simultaneously manages the gain and volume. It is added to a 2-band EQ Spartan (treble and bass).
The dirty channel has a volume, a separate gain and 3-band EQ.
Each of the eight knobs is identified by means of a pictogram (which was on the Orange OR 1972 models), we quickly understand who does what and the vintage look is quite nice.
At the rear, there are 3 speaker outputs (one of 16 Ohm and two 8 Ohm) and 3 outputs for footswitches standard format Jack: one to change the channel, the second to receive a "boost gain" the dirty and the third to receive a "boost volume" used on both channels channel. An effects loop is also present, but not integrated reverb unlike Rocker / Thunderverb heads.
9 lamps in total: four 12AX7 preamp for, for four EL34 power section and a 12AT7 to drive the effects loop (which is also very transparent).
Chinese TH30 was already very well finished, but this is high fashion, everything is impeccably assembled, and the bowels of the beast longer think an Aston Martin engine as that of a Clio .. .
In return, she weighs the weight of a dead donkey (about 25 kg ...).

This is the Orange, so it sounds without spending 3 hours turning knobs. The manual is ... uh ... what is the manual?
Orange amps makes the most plug and play of the market, is one of the things that make their charm.

I plug this head on an orange PPC212, and I play a good big upset in a rock power trio, in short I do not branch single coils on my amps ...
The potato level, this amp will cause a crack in a nuclear reactor, power output is monstrous, and I truly believe that modes 30 and 50 Watts me well enough.
The clean sound is really good, ultra dynamic and having a "headroom" impressive (especially large that puts watts obviously). The bass is huge, and very round and well-balanced sound. You have to push the knob far enough in his run for the sound begins to twist, but frankly there even 30 watts is not tenable unless you use a loadbox. The sound becomes crappy, nasty and untamed, it really feels like on one of these amps English seventies pushed to block.
The clean channel is very "pedal friendly", I tested it overdrive, fuzz and wah Octavers, it&#39;s really any good!
The dirty channel now: wow ...
The gain range is very gradual (rather than on leTH30), going from sound just messed with the gain at 9/10 am (in a real bluesy vein), a big crunch that springs to 12 with the knob gain (and AC / DC is in the house ...), it then progresses to a massive distortion with the gain at 13 hours (the most bloody hard rocks are there), and beyond 15 hours the saturation we propels the Metal without any problems (at least the old school version of the thing: the old Metallica, Pantera, this kind of madness ...).
For more aggressive things, I do not have the guitar expected to realize, but I do not think this is the most suitable amp.
The sounds are GRAS, hot, a musicality never been at fault, and the mountain dynamic that takes in the mouth is simply indescribable. Now fans of "mid scoop" radical and very very defined distortions probably go look elsewhere, although some of the metalheads in a while come to Orange ...

The "boost gain" is a total killer, it makes us wonder why we bought these overdrives and boosters to inflate these solos ...
The "volume boost" must also be very interesting, but I miss back for now.

In a rock record in a broad sense, the Orange OR100 can play everything, and everything is beautiful, the most clear to the most massive distortions clean.
It will take me more time to find all the hidden objects in this huge being full sound, but what I&#39;ve heard so far makes me want to go there take seriously!
Its modular power makes it usable in many configurations, including rehearsals, provided play in a style that sends a minimum.
This is a high end amp that offers performance report, and its price is unfortunately accordingly.
Good amateur rocks of all kinds, is my humble opinion that Orange has developed there a phenomenal amp head.

Orange Launches the 2-channel OR100