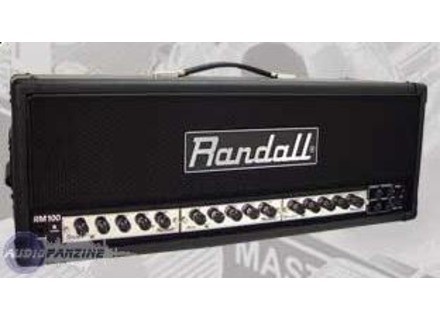 Randall RM 100 B
5
This is a 100watt all tube amplifier with a modular preamp.

This amp is awesome for so many reasons. So start off there are individual bias test points and controls for each power tube. You literally can run any arrangement of tubes you want. And the controls are all right there on the back panel, its the most convenient and functional design I've ever see.

It has 2 effects loops, parallel and serial, so you can run which ever you prefer.

The absolute coolest feature is modular preamp. Randall sells a variety of modules, each modeled after a different sound or amp. This feature alone makes this amp one of the coolest and most versatile amps out there. When ever you want so get a new sound you just put the amp on standby, unscrew the mounting screws, pull the module out and put a new one in. This particular amp has 3 module slots. each of them acts as an individual channel.

The channels are footswitchable.

The amp itself comes with no modules, so you'll have to buy some before you can get started. But once you do its very easy to get great sounds.

There are only 2 draw backs to this amp in my opinion. The preamp modules aren't entirely isolated, they all share a preamp tube. They also (obviously) share the same power section. This leads to the modules, especially the high gain ones, all sounding a somewhat similar. There is definitely distinction between them, just not as much as between to different amps.

The second draw back is that both loops are designed for rack gear. This means that pedals do not sound great through this amp unless they have a line level mode. This isn't an issue if you have rack effects though, and this amp is really designed to be used with rack gear as the channels are all MIDI controlled.

Overall this is an amazing amp, really really versatile on stage and in the studio. Granted, it doesn't have the sonic diversity as multiple amps would due to the shared preamp tube and power section, but there still is a lot of diversity.

These amps can be had for really cheap used these days too, which is awesome.

The biggest and only real draw back in my opinion is that is sort of a money pit. Every time you want to try a new tone you just have to go buy a new module, but the desire for new modules never goes away. Before you know it you'll have 7 or 8 modules, and at $200 a piece stock that adds up quick. Ultimately that's the reason I got rid of mine.
Did you find this review helpful?yesno
»

poulpinaz's review (This content has been automatically translated from French)

Randall RM 100 B
5
Modular All Tube amp.
1 12AX7 and four 6L6 power section and for the two lamps per module (3 modules in total over a range of fifteen to Randall and Egnater at 7 or 8 who invented this system for Randall)
100 w all lamps, MIDI, a master volume, a presence control (for high) and density (for the serious - in moderation with the model mounted 6L6 ...) plus an adjustable mix effect . At the rear, all that is possible, noon (earlier), effects loops serial and parallel output Hp, online and apparent bias adjustment and easy to change the lamps and only fissa!
Per module, Gain, 3-band EQ, master and a Bright switch (low gain more efficient, logical)

Rather simple, to save the channel noon, we choose the channel on the pedals (noon at once) and support for 3 seconds on the button channel selection and hop in the box!
If this is to explain the right way to put on and remove the modules, the manual is useless to me.
For sound, it's something else: I explain:
Given the difference between modules and settings Presence and Density, get a dial tone consistent between the different channels and not always super easy ... We must choose those modules ...
But the channel setting is childish.

Basically, just choose the right preamp and power tubes and good ca rolls.
In fact, for a tube amp, it shows a huge neutrality for overdrive, crunch and distortion seems a little bland ... in fact, sounds clearer, it is a killing machine crows but I think it lacks character.
Some friends of mine think it's great, the sound is really neutral, not really colored by the power stage (but especially the pre-amp) and they love it.
I abuse it with a Tele and a PRS. Both are expressed independently is very clean (the advantage of tonal neutrality). In fact it is an ace of the volatility. With a change of modules is done in 10 seconds is a monster of modularity.

Edict of 17/09/06
in fact, I take back what I wrote level character ...
It is full of character, I was a victim of a faulty module that replaced me reveal the beast. The clean sound is always great and the distortion grows drool or slice according to taste, impeccable

I've had five months, acquired after many trials and much thought ...
Otherwise level money, it is well placed hyper (especially with grace and versatility ca ca connectivity accomplished), I'm a little on my end at the sound character, but it is mostly a matter of taste, because I ended paid by a Dual Rectifier (sound embodied the personality).
If you want your sound to your image, whether near or far from the clichés, this amp can do. and day, wherever you want another sound, he can always do it!
Very hard all that!

Edict of 17/09/06
Now that I have identified the concern, in fact, the amp is excellent, over his signature issue, because it is almost completely customizable, with appallingly Slamp modules and power. So, I made a doublet with the Mesa, so 6 sounds RRRRRRrrrrrrrrrrrRRRRRRRR!
Did you find this review helpful?yesno
»

juju1609's review (This content has been automatically translated from French)

Randall RM 100 B
5
Everything is already said in the post Previous ...

It gets very easily sound the rglages are super simple and works the equalizer Manir a boogie, while the mini Deson not, you have to play with these rglages for volume, 3d ...

Absolutely no limits with all the modules arranged in both Randall and Egnater than again you can change the modules ahahahah Mortal, is just listen to what a modified xtc gives you, or a modified front.

It should all styles of music because Entirely adaptable, more lamps are not original gniales, at least I'm not a fan of dd rcentes.

Drout thing in the beginning is that there is no switch for dsenclencher rflchissant loops but the question we have several options for example: to a volume pedal before the effects loop on the PARALLEL, rglage mix thoroughly, and the god of sound you contrl dosage effects on the foot.

You can still use a looper style access, which unfortunately is no longer sold by noon and the result is the same.

Only regret much searching, having only three slots for add-ons

I have since very little time but I am satisfied they do not hide to have pieces of Asian origin but tell me what brand Bogner even includes only pieces am American or the European's impossible.

It is the most versatile and one that tinkering can change its own modules or are the limits?? Shoots very far
Did you find this review helpful?yesno
»