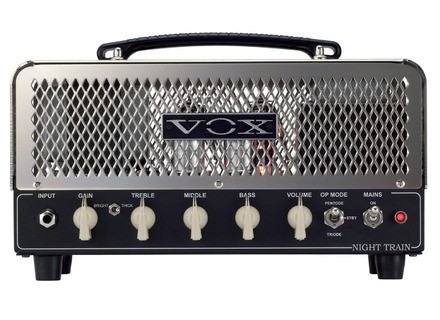 Vox NT15H Night Train
4
The Vox Night Train is Vox's answer to the low wattage game. Offering a reasonable mixture of portability and sound quality, the Night Train is one of the nicest low cost tube amps on the market as of 2012. The Night train's front panel is adorned with a simple array of controls. Gain, Treble, Middle, Bass, Volume. Two toggle switches offer advanced control over your sound. The operating mode switch functions as a standby and half power switch, while a second toggle allows you to choose between bright and thick modes. Engaging the Thick mode bypasses the amp's Eq and allows for more gain to be applied to the sound. The amp is 15 watts but can operate at 7.5 watts with the half power switch engaged (using the triode selection) and runs on a pair of el84's.

The Vox's simple layout makes getting a good sound a straight forward endeavor, however the lack of an effects loop or the ability to select channels makes the amp decently compromised in the eyes of a gigging musician. These missing features can easily be forgiven though considering the affordability granted to an all tube circuit. The amp takes pedals fairly well without the effects loops and the amp is plenty loud if you are mic-ing your backline (and you should be).

I played through the Vox Night Train with a Gibson Les Paul Traditional w/ stock pickups. I used a Mesa 2x12 cab. No pedals.


The amps clean sounds are very pleasant and compliment a variety of guitars. I primarily tested the Night Train with a dark sounding, mahogany body guitar and the bright mode made the guitar sparkle. The tube circuit provides for nice articulation in your sound. Engaging the thick mode, you are able to drive the amp very hard and cover many genres. The drive sounds performed excellently and I found myself often forgetting that I was playing a $300 amp.

The Vox Night train is an excellent solution for those who need a portable, all tube design. The affordability of this amp is unparalleled when comparing the sound quality of it's neighboring price points.
Did you find this review helpful?yesno
»

Vox NT15H Night Train
4
I've paired this with a 1x12 avatar cab with an alnico blue in it and it just sings. Even drove a 2x12 avatar cab with it last weekend and it was easily loud enough to be heard over a full band turned up loud at just half volume! (running on pentode mode)

If you set it up right it gives you amazing flexibility at your guitar. I don't even use my distortion pedal anymore -- fiddling with volume and pickup selection is more than enough to dial in a whole range of tone (helped by the fact that my PRS custom 22 can play in both single coil and hum bucking configurations.)

The bright channel is just that, bright -- and with the stock cabinet and a fender strat itll sound downright shrill. Most of the complaints I've heard say something to this effect, but set it up properly and mate it to a good, closed back cabinet and you're in business. If you want the great tone of a small wattage amp, are on a budget, but still need some serious volume, this thing will more than suffice. And my god does it sound good!

Overall this is a very well built piece. Cosmetically you couldn’t ask for a prettier, shiny amp. I'm sure no matter where you go you will find someone who will have a list of negatives to throw at it. The thick channel in my opinion leaves alot to be desired.

I will warn you that the treble should not be turned past noon if you don't want piercing, brittle highs. I have been told that changing the preamp tubes and altering the bright cap can help this but I personally haven't done this so I don't know. If your a hobby player like myself or if you gig; this amp may suit your preferences. It may take a little time to find your sound, but what the hell that's half the fun.

Vox NT15H Night Train
4
The VOX NT15 is one of the earliest additions to the "lunch box" family of amps that has been a popular fad. It begun with the Orange Tiny Terror and progressed to further amps like the Egnater Tweaker, the Traynor DarkHorse, the Mesa Transatlantic, and of course this VOX.

The characteristics are very simple and straightforward for a small head. It delivers 15 watts of all tube power and is switchable via a half power mode to 7.5 watts. The amp is powered by a pair of EL84 tubes and really sings. The control set on this amp is very simple. It has a very basic interface that comprises a gain control, bass, middle, and treble for your equalization, and a master volume. There is also a small switch that is labeled "Bright" and "Thick." Bright mode is very much like your typical VOX jangly clean tone (AC15/30) at lower gain settings, and takes on an almost Brian May esque character as you turn the gain up. Flipping it over to the "Thick" setting actually disables the EQ controls and bumps up the gain for a more focused, heavy rock sort of sound.

One thing to note is that there's no effects loop or reverb on this amp, so you're dealing with a totally dry signal unless you own a good delay or reverb unit. That was a big caveat for me and part of the reason I ultimately sold it.

Setting up this amp is very simple. It can be plugged into an 8ohm or 16ohm cabinet, so I tried it through my personal Haggerty Enclosures G212 with Eminence V12 speakers, an Ibanez 4x12 with stock speakers, and a Marshall 4x12 with Celestions. It was very easy to set up and I had good tones happening within minutes. I found it to sound best and most focused through my 2x12 with the more British voiced speakers.

The Bright Mode is your typical sixties VOX clean tone. If I needed more versatility, I would use the Bright mode, turn the gain up on the amp and use my guitar volume to control cleans. I occasionally experimented with a boost pedal, but usually I found the setup of using the Bright mode and my guitar volume to be the best bet. If I was playing in more of a rock setting, I would use the Thick mode with the gain at about 1 oclock.

Make no mistake, this amp has tonnes of gain and a surprising amount of headroom on tap... I was using it in a modern rock project with a hard hitting drummer and it kept up without issue at all times.

When I was using this amp, my primary guitars were a Gibson Les Paul Traditional Plus and a Charvel San Dimas with Duncans. I was really impressed with the wide range of tones that were available by turning the knobs or using the guitar volume and tone controls. The fact that it technically is not a channel switcher was a bit of a drag in certain situations (A footswitchable mode for the Bright and Thick modes would be excellent.

Overall I was significantly impressed with the tones that it covered. It went very easily from that classic chiming VOX clean tone to a very viscous and searing modern rock tone with the flick of the switch. Switching into half power acted as a bit of a Variac type thing where it made the feel of the amp a little bit spongier and the tone a bit more juicy. The Thick mode was a shocker for sure... it stood toe to toe with a 100w Peavey ValveKing and 4x12 cabinet in a band setting... in half power no less! I had no problems cutting over drums, bass, and the aforementioned half stack, so if you're concerned about volume levels... try one out and see for yourself. It has a considerable amount of headroom for an amp its size and power.

All in all I feel that VOX is onto a real winner with the Night Train. I compared it to the Orange Tiny Terror, the Traynor Dark Horse and Mesa Boogie Transatlantic, and found it to be the winner easily. What it lacks in some of those extra features (channel switching, various tonal modes, etc) it makes up for in spades with its clear, powerful tone. Definitely a serious contender in the "lunch box" amp market IMO. I sold it to pay for other purchases (and because of the lack of reverb/effects loop) but I definitely would consider another one down the road. For $500 or so brand new, VOX has an amp that sounds just as good as the Dr. Z Maz and the hot rod Marshall amps. Certainly a wise buy, and I'd recommend it in spades over any of the other small amps that I listed above.

silverball's review (This content has been automatically translated from French)

Vox NT15H Night Train
5
It comes with a 15w amp has lamps
-2 EL84 power
-2 12AX7 in Preamplification
A clear channel (bright) and a channel saturates (thick)
possibility of lower power 7.5W
An output 8 ohm and 16
THERE has a three-band equalization
a Gain a Volume

This amp is perfect for all roots rock blues styles ...
IT has the sound but cons I have a very audible ground noise that prevents me enjoy

I for 1 month is very good with a very good value for money but the sound mass that he clears prevents me from ex ploite its potential
Did you find this review helpful?yesno
»
Read the 25 user reviews on the Vox NT15H Night Train »

Published on 01/23/09
VOX Amplification has joined forces with amp designer Tony Bruno (no, not me, guys) to introduce the NT15H "Night Train", a 15-Watt, all-tube guitar amplifier head.