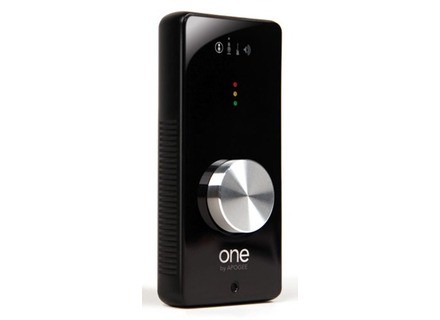 ONE, USB audio interface from Apogee in the One series.

Apogee ONE
4
Apogee's One is a usb interface for DAW based recording, giving you big, professional quality results in an ultra portable package. The One features one of apogee's proprietary mic pre's, a direct in for recording line-level instruments, a built in mic, stereo output, headphone jack, mount for a mic stand, as well as a break out cable to save on size. The front display of the One is very simple, utilizing a single, clickable rotary knob, you can easily move between selections to adjust levels. Aesthetically, the one has a very simple modernistic appeal that should be a welcome sight to apple customers.

The stereo output allow for using the One's converters to monitor takes or to simply enjoy you online album collection. The one is compatible with pretty much any DAW solution, but is configured to work seamlessly with apple's Garageband and Logic series production softwares. Unlike the Duet, One has an onboard microphone and is mountable to a mic stand to create a streamlined home recording chain.

I was able to begin recording using the One in minutes. Using Logic, I was able to track direct guitars and bass and used the onboard mic to capture vocals. To my surprise, the built in mic performed excellently and with standard mix precedures, was able to fit in a mix just as well as a take with a dedicated LDC microphone. The direct guitars were sent to amp simulation plugins and double tracked, yielding wide stereo image and low very low noise. I was very impressed with how simple the recording process became when using the one.

The Apogee one is an excellent home or mobile recording solution. The inclusion of a quality onboard microphone makes for a streamlined recording chain capable of handling an entire studio project all on it's own. You can find these for around $150 on the used market , and for quality Apogee conversion, that is a steal.
Did you find this review helpful?yesno
»

Apogee ONE
5
The Apogee Electronics ONE is a single channel interface that does its job well. What is remarkable about a company like Apogee is that they essentially use the same brilliant components in all of their units, but design the number and arrangement differently in each one so that there is a maximum consistency between them all. In these regards, the Apogee ONE has the world class converters of digital to analog and analog to digital that Apogee is known for, in addition to its world class preamps which can drive something that needs a whole load of gain. I believe it has 63 dB of gain. What is even more remarkable about the Apogee ONE is the fact that this interface has its own built in condenser microphone. You may be thinking that this is just a gimmick, but in typical Apogee fashion, the condenser microphone actually compares with some of the better <200 condensers that are not quite flat, but certainly not overly bright either. You would be incredibly surprised at it; it absolutely blasts any condenser microphone out of the water under $100. I will put money down on that one.

The Apogee ONE is very simple. Plug it in. Play it. There really is nothing to it. It is great to just use the ONE with everything, and you can take it with you. You can pretty much replace the built in microphone on your Mac with this little machine. The knob is also used exactly the same way that the Duet's knob is used. Push to change function.

This is simple. Everything is problem free with the ONE.

In the end, the ONE is a great alternative to the Duet, and as long as you do not anticipate having to do more than a channel at a time and you do everything in the box, this is a great, world class tool for songwriters to use. The built in microphone also makes this interface that much more useful than the Duet as long as you do not need the channels or the bit of extra gain from the Duet.
Did you find this review helpful?yesno
»

Apogee ONE
4
I had owned the Apogee Duet until a few months ago when I traded up to the Apogee Ensemble. Before too long I realized with some pain the need to have the flexibility of a portable interface for remote recording situations. By the time I realized this, Apogee came out with the One, so I gave it a look. Like its big brother, the One just works exactly like it should. It has that beautiful, sweet, very musical Apogee sound. And, in my view, several remarkable improvements over the Duet. One is the price. Two is the fact that it has a very nice built-in condenser mic. The built-in mic is extremely usable, with a nice frequency response that, while never sounding dead flat, doesn't suffer from the overly brittle top end that a lot of inexpensive mics have. I was very surprised by the open-ness of the built-in mic, which is a definite improvement over the MacBook Pro mic and compares favorably to an AKG Perception series. The third advantage is that the tiny plastic body makes it much easier to toss this thing into a laptop bag without worrying about hurting it. In that respect the Duet was maybe too nice. Fourth, the ONE is lightning-fast, no doubt because it only has the one channel. I can play Amplitube or Guitar Rig without artifacts at 32 samples, the lowest setting. I can't even do that well with the Ensemble.

Logic, Pro Tools, Garage Band are the softwares that i use most and it works great with them.

Getting started was quick and easy, as this was way easy than the duet was.

Overall, I use the One not just for field recording, but also as an interface when I just want to plug in a guitar and jam. But overall I love products like this, small compact and works like a charm. Not too mention you can get it at a great price. I choose this over the duet any day now. And I have had the duet for some time!
Did you find this review helpful?yesno
»

The last update for the One was in September 2009, about nearly 2 years ago. Drivers are rock solid and this is most likely the reason why there has been no software update since then. I’m using Apple’s Mainstage and Logic Pro with this unit, and they work together very well. I’m using an I/O buffer size of 32 samples with mainstage and it works very well, and I’m using a 2011 Macbook pro 13 inch. The One only can record one input at a time, but can switch between an internal mic, and external one or instrument input.

Sound quality is great from the One! This is most likely due to the great converters and preamps compared to other audio interfaces in this price range. Most other interfaces have more I/O but in this case, qualityquantity works in the favor of the Apogee One. I’ve had troubles with the instrument input, which doesn’t allow recording of my guitar at all. I’m currently about to get in contact with Apogee to resolve this.

The thing is about the One I like the most is the quality of the preamps/converters at such a great price range. It is also very portable for its size, which is useful when traveling with a laptop where you don't want a big interface in your bag. Sound is excellent and very high quality. If I had the choice of choosing another interface, I would choose the One again, even although I had the issues which I'm sure will be resolved!
Did you find this review helpful?yesno
»
Read the 6 user reviews on the Apogee ONE »

Published on 03/11/15
Apogee has released new installers that add remote control via Logic Pro X and Logic Remote for their audio interfaces.