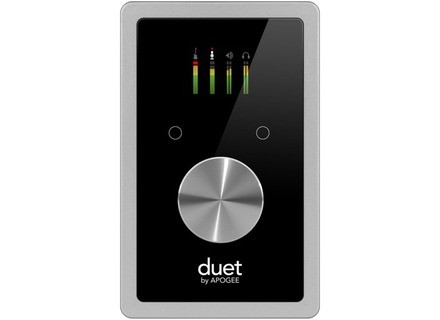 Duet 2, USB audio interface from Apogee in the Duet series.

Product replaced by the Apogee Duet for iPad & Mac.

The Duet at its Apogee? About four years ago, Apogee launched a digital audio FireWire interface called Duet that offered two analog ins and outs. In the meantime, competitors have brought out some very interesting products, especially RME with its attractive Babyface. The brand with the violet logo couldn't keep its arms crossed so they launched an improved version 2. The verdict? Read more…

View all offers for Apogee Duet 2 »

See all 40 classified ads about the Apogee Duet 2 »

Apogee Duet 2
5
Apogee Duet 2 is an amazing usb audio interface, very portable i travel with it all the time, its also very sturdy, it comes with a breakout cable connects instruments, cables, microphones and speakers, has 2 ins and 4 outs, features XLRs plus original 1/4 inch inputs/outputs, also has a headphone port. Has awesome OLED display screen i think thats the biggest improvement from the last duet interface, its small screen but its easy to read. Also i like how it has a usb 2.0 connection on my old Duet i had to use the firewire, the usb helps bring lower latency . It also come with external power if you needed it to use for phantom power option. It comes with a Maestro 2 software you can also download it on the apogee site lets you manage and control the duet from within, the duet 2 has two small knobs in from and one big wheel, the two small ones can be set to any setting for example you can make it be the mute button, and the the big wheel is your main control of volume for each channel. I use it with my 15 inch macbook pro with 8GB RAM, by the way the apogee Duet 2 runs ONLY ON THE MAC OSX PLATFORM.

I mainly use Logic Pro and Pro Tools with it works out for me, I recently had some poping sounds come out when i was moving the volume knob, but after a quick restart it went away, I also remember one time it shut off randomly on me, just some small glitches that don't occur repeatedly. I use it on the daily basis so it has put it a good amount of hours.

I had no compatibility issues everything connected well, I used the manual to figure out the start up but overall its a simple audio interface compare to other ones. The functions are easily accessible and controlled.

I also have the Apogee Duet which gave me some problems so i had to switch to the Duet 2 and I love it, if it broke down on me i would get it again its so portable and the sound is clear, its the best sounding interface I ever heard for that price, the price is fair . Apogee is know for quality and I approve .
Did you find this review helpful?yesno
»

Apogee Duet 2
4
With 2 in and 4 out, this USB Audio Interface has 2 mic preamps in this little device by Apogee, it is called the Duet 2. I have not been using the Duet 2 that long (less than 1 year). But my time with it has been really good. It comes with Maestro 2 which is a software. The special thing about this interface is that its just plug and play. There were no issues with installing it, with me being a musician and songwriter I needed to have something that I could easily just plug in and it work right away.

The sound is really good, and the unit is very easy to use. This unit does have phantom power and it is Bus Powered. The audio output types are 2 TRS, 1 ¼ headphone jack. If you have a bunch of different audio you need to get into your computer at the same time or you want it to be hooked up at the same time then this interface is not for you. It is a simple interface and it works just like that, simple! It is on the higher priced side of interfaces for such a small unit though.

The 2 mic preamps are really good. and they can capture some great sound from your source or instrument in stereo. With this interface it all depends on which Mac you will be using with it. If your computer does not have the requirements with the OS then you will have major driver issues with this interface.

This interface is small but powerful, you can pack it with you and take it anywhere you need it to go which is a huge plus for my setup which I try to keep pretty small. The display on the front of the Duet 2 doesn’t really have too much just some LED’s that let you see the input and output levels of what you have going through it. The quality of the Duet 2 is great, and it is small. If you can overlook the price you will be 100 percent happy with this purchase.

So, no drivers from Apogee (it's Apple), Drivers extremely UNSTABLE, I use Live,any number of tracks could create problems.

Clicks and pops ALL THE WAY!

Hello, bad news here, so I'm running the DUET 2 with my iMac (2.8 i7 8gb ram) OsX 10.8.1 (latest Mountain Lion update), a disaster, clicks and pops are unbearable. I can't find a working flow because of this, I've been in contact with Apogee for more than 2 weeks now and I think we're just exchanging e-mails for nothing really. I'm pretty sure they know what's wrong but there's probably bureaucratic stuff going on with Apple. What I mean is that the tech from Apogee told me they don't even do DRIVERS anymore, their units now depend on Apples DRIVERS!!! so they say. It's quiet amusing that they advertise so much about catching creativity and whatnot, yet I'm not even able to concentrate on my work. BTW I didn't have any clicks at all with my Mbox Pro, right before changing for the Duet 2, and I was using the same system. Clicks may not appear right when you open a fresh new session, but they will happen, the you'll have to reboot over and over. You simply can't work like this.
Did you find this review helpful?yesno
»

Apogee Duet 2
5
Apogee's famous audio interface, the Apogee Duet, has just recently received an overhaul, and the overhaul is fantastic. Apogee is known in the industry for fantastic analog to digital or digital to analog conversion; in fact, they are considered the best in the business. Compared to the original Duet, the Duet 2 has some changes that many owners have been jonesing for for quite some time, and for some, the improvements are only incremental and not worth it. Find out which one you are! The nice thing is that it has two more outputs than the original Duet, which makes it much more useful all in all. It still is not terribly good at dealing with outboard gear though.

The Duet 2 is just as simple to use as the original Apogee Duet. The interface is incredibly simple, as Apogee makes using the preamp headphone monitor levels very easy to access for the end user. The manual is incredibly concise, but the truth is, the device is just so simple to use that most people should not at all have a hard time getting into learning how to use the Duet 2 at all. And for beginners, I could not think of an easier interface to start on.

Everything that the Duet 2 is is fantastic. The preamps are absolutely pristine and offer an absurd amount of gain. Ribbons can be run through this thing without having to kill the knobs or the levels. What is more amazing is that these preamps are part of the interface, and that the interface's converters are so good that they appear completely seamless. The sound is completely professional, and you can get it well before you hit the 4 digit prices with the Duet 2.

If you are doing most of your work inside the box, this is pretty much the quintessentially perfect interface for you. There really is nothing much more to say. The Duet 2 is perfect for what it tries to be.
Did you find this review helpful?yesno
»
Read the 15 user reviews on the Apogee Duet 2 »

[NAMM] Neumann & Apogee in a bundle

Published on 01/22/16
Neumann and Apogee have announced the release of a bundle including the Neumann TLM 102 large-diaphragm microphone and Apogee Duet audio interface.

Listen to the 6 audio files about Apogee Duet 2 »