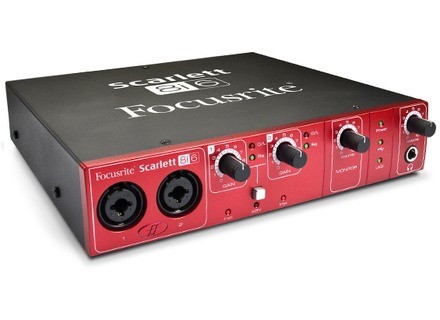 Scarlett 8i6, USB audio interface from Focusrite in the Scarlett series.

Focusrite Scarlett 8i6
4
I bought it after reading many reviews and talking to some friends, had really good recomendations. I use it for 2 channel recordings in my home studio while making sound effects for videogames, voice over or a couple real instruments to put with the virtual ones in a soundtrack.

Setup is simple, I pretty much just plug any electric instrument straight into the Hi-Z input, or my rode mic in the front pre-amp. I'm using it on a 2014 mac book air i5 1.4GHz, 4GB ram, osx mavericks. Also used it in a mac mini mid 2011 model with 8gb ram, and it works fine on both.

Since it works fine with my setup I've never really bothered looking for updates, I like their software for monitoring, latency is low and quite acceptable. I've used it with Reaper 4, Logic 9 and now Logic X, runs smoothly on all of them.

I've never really used all of its inputs at once, though, but with 2 channel recordings I can easily use Logic guitar amp/pedal simulators as well as have a nice vocal chain with EQ, compression and reverb, all in real time while recording, all tweakable later on the mix.

It was pretty much plug and play... well, after installing the monitoring software. Since the basic functions are easy to get working I didn't bother going into the advanced stuff, I just rather do all the monitoring and processing in the DAW, its simpler and fits well my workflow.

I really like the preamps, they were the main reason why I've bought the interface. They are clean and sound good even if you leave a lot of headroom (peaks of -18dB are totally fine), which is good if you're the type of person that likes to get the signal into your software and then forget that everything in between is even there.

Before this one I had a cheap m-audio interface and with the focusrite it was the first time that I really could tell a BIG difference in sound quality from what I was doing before. At some point, if you keep working a lot and start listening to other more expensive interfaces, you'll probably want to move on, either for a specific set of features, more channels, or (even) better pre-amps. But for sure, if you're coming from a cheaper interface (or even if you're looking for your first one) this little focusrite will definitely help you get really good recordings for not much money. Absolutely recommended.
Did you find this review helpful?yesno
»

stompboxjon's review"Interface is good, a little latency is present though"

Focusrite Scarlett 8i6
4
The Scarlett 8i6 has not been out for a long time so it is difficult to say how well it will run and how the drivers will be updated in the near future. But so far every single part of this interface seems to work great and it is well built. It connects to your computer through USB and it is a 6 in and 6 out interface (you can record 6 tracks simultaneously) with 2 mic preamps.

The Scarlett 8i6 comes with a Focusrite software called MixControl, this software is decent but I don’t think it is anything that you should make the decision whether or not your want this interface over. I hardly ever use that software, I used it a lot within the first week I had the 8i6 but then after that it was no use to me. The Scarlett 8i6 also comes with Ableton Live Lite 8 in case you are in need of a DAW and sequencer. You will have everything you need right out of the box to start making music and recording right away.

So far the drivers are stable, and the manual is easy to understand. It comes in PDF format. I have not seen a hard copy of the manual. All of the basic functions of the Scarlett 8i6 are easy to understand and use. It could take some time setting everything up if you are going to install the interface all of the plug-ins and Ableton Live Lite 8. But once you get it up and running you will be happy.

This interface is solid, well built and with a decent preamp. The issue is that there are other interfaces that are similar to this one that are FireWire and will give you lower latency issues. When using the Scarlett 8i6 you will be able to tell you are having some latency issues during certain projects. For some of us this is a deal breaker.

Focusrite Scarlett 8i6
1
This product has given me satisfaction for over a year I did a good job with good preamps, I've done my acoustic cello multitrack projects. However I had to change to Mac and from Mac OSX 9 new Mavericks is a disaster!

Crashes fixed after downloading the latest driver updated in December 2013: Scarlet MixControl 1.7.128 then noises and random behavior of the audio interface making it impossible to record. Even after the advice of the technical support Focusrite installed a "class_compliant.app" that does not solve much. What is clear is that the support is insufficient, not serious for such a prestigious brand

Instability, drivers not really updated. Lack of serious support side. This should not happen

After-sales service: zero or you call in the UK!

Did you find this review helpful?yesno
»
Read the 8 user reviews on the Focusrite Scarlett 8i6 »

Focusrite Scarlett 8i6 tips and tutorials

See all 43 photos of Focusrite Scarlett 8i6 »