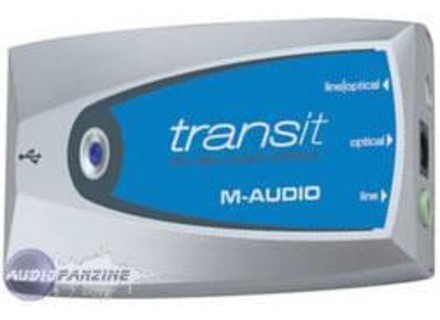 M-Audio Transit
4
The M audio transit is a very small interface that is the most portable you will find. I still have mine even though I don’t use it anymore. I actually got it with another piece of gear that I purchased online during a sale. This interface has nothing special too it and will work in any daw (atleast I think it will) It will basically act as your sound card if you want it too when using it in fl studio. I had a dell laptop that I use for work and I keep a copy of fl studio on for when I am on trips and I use this interface with it to record some demo vocals or anything into my computer. I have even used it just to record some quick speeches.

I havent had any issues with the driver and never had to download a new one. The same one just continued to work every time I plug it up. My laptop was windows xp, but im pretty sure it also works in vista if I remember correctly.

Getting started was a breeze, you really couldn’t ask for much more from a small interface like this that is really cheap. You can get this things at all your favorite music stores for a really low price. So if you are in need of an interface but can t afford a good one or don’t have space for a bigger one just use this one and save the money and still get great quality.

Overall, im very happy with it. It has far succeeded my expectations of what a little interface can do. It really surprised me and I recommend this to all the people who record on the go or have a small workspace/area at home to record in. this will suit you just fine.

sebalto's review (This content has been automatically translated from French)

M-Audio Transit
4
I wanted an interface transport home (mac) in the studio (reason). So I had the support of all the bones, asio drivers (reason) and optical inputs and outputs (I have a pramp mindprint converter).
The mac is an e-mac 800mhz. On P4B 2.4 ghz pc an MSI motherboard 1gig of ram 7200 rpm ide

For children, 2 minutes. No printed manual and no need.

The drivers I know sonrai nickels (2 days). Logic and Reason with no prob. Latency of 7 ms without problmes.A 3ms, cracking occasional use with other software in the background.
I did not test the multi-BEYOND THE stro.

2 days use. I love a few grams and size 10 cigarettes USB cable included.
Before I had a luna2, an adda 2000, various multimedia cards. Analog is not terrible, there is a noise I guess converter (low whistle) because it disappears in optics via my mindprint di-port. In addition, the analog mini-jack connection is not reliable.
But I am filling the optical quality compared to price a versatile and miniaturized with good drivers trs is good. You just have to be a good quip prampli converters and spars in and out.
And attention, 96khz, you must choose between input or output
Did you find this review helpful?yesno
»

Rantanplan's review (This content has been automatically translated from French)

M-Audio Transit
4
I needed a simple interface incorporates the standard audio Asio to manage low latency, with a limited budget, allowing me to use my laptop as amp simulator and register for my track by track p&#39;tites models ... mission accomplished!

In between, there&#39;s a mixer dispatcher for the different instrumentals (Preamp Audio Buddy in anticipation ...) Tape Out to the card input, analog output card on small digital sound system and on edirol I-10d ...

Installation impeccable in the end: just a little stress shift because the card does not pass the Windows Logo testing, without affecting the proper functioning of the thing: in fact, the detailed manual on the CD we made for this problem that in fact is not one .... phew!
So we install the software, it restarts, you plug the card, windows installs the drivers and shoo!
Impeccable ...

Configuration level, it seems a bit light at the base of the kind we choose the sample rate, latency and point bar, but what should be more?

The manual clearly states the procedure to be followed for each operating system, technical features and connectivity ... all the same, is not a dissertation on it too

One week of use, no big problems:

FruityLoops in 3.5: one with whom I corresponded afien me indicates a compatibility issue with Fruity, and indeed, ca is not running as well as it should work, from time to time, the CPU meter goes well beyond of 100% when playing dun project. However, the sound is normal, no creaking when reading simple, but if you change your project at the same time, small CRACs apparaisent when displaying a plug-in, changing a knob, etc. , not really a problem in the end for my case ........ too bad when even ....

in CoolEditPro2: impeccable read on a draft 15/16 tracks with an equa different on each track, effects no &#39;fixs&#39;, plus a reverb bus ... on the other hand, not record the effects on the slopes, you have to finish recording before you start mixing the part itself, or else remove all to add some ...... Methinks it&#39;s my little config problem rather than the card ..........................
Record-level small concern compared to the level of entry, it is important not to settle the entrance to the limit of digital clipping to appear under penalty of unwanted clicks on the track .... So knob of entry at least in the windows mixer, not really a concern since I record vocals and guitar for both gross for after going through various plug-ins that will give warmth and level .... it always comes out!

in Console: used to play Live, everything is perfect, very low latency SET AT, no perceptible delay, just this little entry-level concerns; here, adjust the level closest to the clipping, the shift in AmpliTube plug one style will bring up a very unpleasant kind of crunch on the passages &#39;clean&#39;, so always set the minimum and the sound of hell, even if AmpliTube does not seem to get enough signal to process (all diode time on yellow .......)
In conclusion, this problem level (with the knob of a minimum entry in the mixer, you get a -13 /-11db max), I assume that the input has to do everything (line + mic or even a small phantom power) is precisely that level line is a difficult process for high volume card ........ I will do with the m-audio sav .... Despite this, the sound is nice anyway, and once properly adjusted levels, roll my chicken ......

The little happens there is a little over a week, so it Hatif notice that I would change I would have more hours of use in the legs ... Indeed, the case is tiny, power from the USB port so that the benefits (in fact, the use of battery operation does not alter, and even if the minimum energy management enabled, saving resources such and company ).... Just what worries of input levels that may impede people trying at once a large volume (like recording a guitar amp with microphone). My previous card was an Extigy, sold as not designed for musicians (why transit is not out a month earlier ??????)

Considering the price, 109 Roros, and given demon budget for music, I&#39;m glad that I think was making out such an interface, but perhaps they would have done better not to make a line between. .............. m&#39;enfin, thank you M-Audio!
Recommended for toddlers Bugdet.
Did you find this review helpful?yesno
»

Drs's review (This content has been automatically translated from French)

M-Audio Transit
5
I use the M-Audio on an iBook G4 1Ghz with 256MB of RAM. The goal of finding a silent audio interface cheap but also without sacrificing quality. Something short of good quality low price ...
In dpart, it seemed compromised. In view of the M-box or other interface, wads of outputs and other pramplis I did not know what to do.
I want a release from Stereo (RCA not please) and the same thing in numrique.

My transit Intgr my home, although my connection Berhinger 12 votes (e / s). And that happiness intgral (especially compared to the m. ... iMic, which I think is not acceptable for the same job totally amateur: noise, not ASIO. .. in short, a total disgrace!)

Installation level, it was done in 3 minutes flat.
Dtail one must connect the transit after the mac Allum. If you leave industry to reboot the machine, it will not be considered. We must know.

Manual level, there's not much to know, everything is said in the panel. Clear prcis, concise.

Just a precision level latency can be changed via the control panel. ERROR!!
At my last power miking, I searched for 2 hours or just the species saturation that I heard ... I just hack the latency on the lowest position, and forgetting return the setting to Medium. Big mistake! Once corrected dtail no more problem.

This product did everything for me, it seems even he has manufactured for me t
Just what I needed, no more, no less, no frills, no excessive price.

While the transit should use home and will not fit other users pousss more, but it is compact, functional, and the sound is more than adequate.

So Do not hesitate!
Did you find this review helpful?yesno
»
Read the 9 user reviews on the M-Audio Transit »

See all 15 photos of M-Audio Transit »