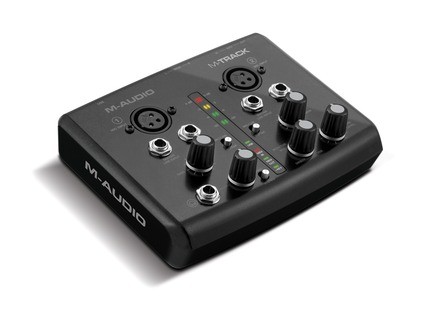 oktopus's review (This content has been automatically translated from French)" It does the job!"

M-Audio M-Track
4
I use this interface primarily with Ableton Live 8 on a Mac that runs OSX 10.8.5.
For now it serves me to record vocals and guitar taken.

I chose to replace my Presonus Firebox I had paid at the time (2006), more than double the price, but I could not use on my macbook pro because of incompatible firewire. Brief. Let's say that I stayed in the entry level

I needed a fast interface, I chose the latter. Its price still largely motivated my choice.

What I dislike most at the moment, compared to the Firebox is that it has only two outlets where Presonus proposed in 6 For the price, you should not expect more ( or better!). For cons, I like its compact size and super nomadic, although the build quality is very "plastic". Listed with time ...
Good point (for my taste): the mic on top of the box. I also like the minimalist design that is not too flashy although, again, the plastic ...

I have not had a crash per se so far (with Live 8). For cons, I happened to have to reboot my computer because of crackles / crackling sound when recording. I still have not managed to identify the cause but a simple reboot was enough for both to remove the problem.
FYI, I use this interface 2-3 times a week, with working time can vary. So I would say that stability, for my case is pretty good.

No problems with drivers / updates on Mac OSX. One branch, it is recognized, we select our I / O and go.

I have no idea how many tracks I can play simultaneously. I work on small projects, often less than a couple of tracks, and I have so far encountered no difficulties, except for the hiss / crackle mentioned above, but that does not seem to be the direct result of a large number of tracks or extensive use of the processor.

When installing, RAS, easy and quick.
I do not remember having opened the manual. So I can not comment on the teaching skills of the guys ptits from M-Audio-)
Personally I already had in my hands an interface before it so I do not have to ask me specific questions.

I use it for three months on a regular basis, having been home for almost a Presonus Firebox 8 years.

For my use (home amateur studio, multitrack recording with friends ...), it fits perfectly. I have neither the skills nor the means to buy better and more efficient at the moment. The two negatives I remember are the lack of outputs (but at 88 €, do not dream) and the story of crunches I can not explain. As long as it remains anecdotal, it's not even a problem!

In conclusion, I would say I am very pleased with this choice. Less than 100 €, I have a product that has done its job and knows how to forget while working.
To use a perfectionist and demanding, there is no doubt that quickly show its limitations.

M-Audio M-Track
5
I had another interface like before, which worked quite well but that could not disable the direct monitoring.

I did not find specific drivers, but asio4all works very well.

I use most often, windows media player it works without a problem (that is to say idiot but hey it's still important), and it also works reaper.

I arrrive making plans with 6 tracks, plus I have not tried I have not enough imagination.
Latency is good but to be honest I do not even know how she is. but hey it works.

No problems with install.
The general config is easy.
No incompatibility.
I too scoured the manual for it all.

I did that for two weeks so it's a little early.

What I like compared to previous map:
More complete connection and settings.

I found that a priori have two entrances, was superfluous, but ultimately avoided CAA to disconnect and reconnect things, plus it's not hide behind the connection is more accessible.
A trimer adjusts between direct monitoring and treated it is rather convenient.
Practice also have a separate between the headset and the sound systems output volume.

Cons:
When I record a guitar on a mono input, the direct monitoring is done only on one ear. it's not going vraiement mono, a little weird, can Erte something I have not yet found.
The rear output are Jack, RCA me good enough ... I would it's not really important.

That overall I'm happy, I do not ask much, but she does it well.

AbitbolGeorge's review (This content has been automatically translated from French)" A good sound card and latest!"

M-Audio M-Track
I was offered this sound card for my birthday!


Card has replaced the fasttrack I think.

I use ASIO4ALL drivers in Ableton Live DAW.

No particular problems. It is very effective for a basic Homestudio and provided the necessary means for amateurs, beginners and advanced.

The drivers are good. But I use asio for ease and latency setting.

No installation problems. Manuel easy for all levels.

I had a little trouble setting the master / cue etc. to the DAW but it still requires some learning.

I love the price and size (easily transportable)

As an amateur I do not have a default on it. If you are a pro mastering go your way.

Published on 01/24/13
M-Audio has announced at NAMM 2013 their new M-Track Series of USB audio/MIDI interfaces, named M-Track, M-Track Plus, and M-Track Quad.

M-Audio M-Track manuals and other files