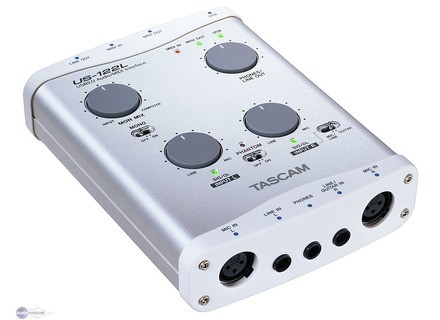 Tascam US-122L
4
I bought the Tascam US-122 looking for an affordable audio interface to record demos of my songs, and I wasn't disappointed! Since it's powered via USB, it's very useful for anyone who works on a laptop, light and portable.
It has two phantom-powered mic inputs and two line-level inputs, so if what you need is to record a single source or a guitar and a microphone the US-122 will get the job done.

I work on Logic Pro mostly, and I did find some issues regarding the interface's compatibility. I had to download the drivers and although they were compatible with Apple Core Audio sometimes the software would not recognize the US-122 so I had to unplug it and set up again, but that would fix the problem most of the time. Also I had some minor latency issues, however as I said before, those were probably happening because of the lack of compatibility with the software I used.

The configuration is very simple, after the installation you can start recording right away. All the typical functions are at hand. I stated above some of the compatibility issues that I had with the Tascam US-122.

This was the first audio interface I bought. Since at the time what I wanted from this audio interface was just recording demos, I found it very useful for that purpose and I'm happy with the work I did with it; however if you want to do audio work that requires great quality this would not be my choice. The Tascam US-122 is great for beginners, mobile recording systems and hobbyist musicians, etc. I still believe that it is a great interface to begin with. It's easy to use and affordable. But if you are serious about producing music with professional audio quality you should consider upgrading.
Did you find this review helpful?yesno
»

Tascam US-122L
5
It's the power behind my home studio right now, which isn't that much, but it's a solid Cubase setup that gets my tracks from 'Point A' to 'Done.' I've been using this for a few years now and I doubt it has a scratch on it. Solid metal grey chassis with plastic bumpers. It's really ruggedly built and rather hefty for it's size. I do sound effect recordings and samplings for various plays, musicals, movies as well as the usual full band recordings.

I needed a cheap way to record. This came with a copy of Cubase LE for less than $100 from Pianos 'n' Stuff in Blawnox, PA, and it's been all I really need since.

I think it's an absolute bargain for a two track recorder. It'll process MIDI, RCA, two mics or a single direct guitar/instrument at a time. I can layer them afterward in Cubase to do a whole band direct. For the combination off software and the features of the unit, I don't think there's a better cheap setup out there, and it's USB 2.0, so there really isn't any chance of latency. It's also powered by that USB cable, so there's really only one wire you need to mess with to your PC. 24-bit, 96kHz quality keeps the music clear and clean, too. And if I ever need more tracks, I can simply go out and get an un-powered mixing board and run it into the two front inputs of the unit.

I just sat here for about 10 minutes and tried to think of something. I guess I'd like it more if it made orange juice, too. equals)

As I said earlier, it's all-out steel and heavy duty plastic construction. Mine doesn't have a scratch on it, mostly because I've taken care of it, but it seems to be pretty darn rugged. None of the connections have ever seemed flimsy or in any way loose, and I've never had reason to suspect a problem with the unit.

It's an absolute best buy. It gets my award for best budget product and best entry level product for recording interfaces hands down. The US-122mkII is really just the same thing in a new color with slightly better hardware. Either one will keep you happy for a long time.

Tascam US-122L
3
I bought this unit at Guitar Center in Hollywood for $199. I needed a means to input audio into my computer for film work.

Solidly built, simple interface, good input options. Attractive in appearance -- so it looks good beside your computer. My computer setup doesn't have space for a full-sized mixer, so the compact size of this unit is a major plus.

When I first acquired it, the US-122 was guaranteed to work with Macintosh computers. It didn't -- at least, not for awhile. Tascam tech support responded quite promptly, to its credit, but I had to download a new driver from their website several months after the purchase, and then suddenly the unit started working. Now it does a fine job, but I felt I shouldn't have had to go through the hassle. Most of the bonus software that comes with the box (Cubasis, GigaStudio 24) couldn't be installed on my Mac G5. Finally, you obviously don't get the number of channels as on a real mixer -- it's not what this thing was designed for.

Looks and feels very well built. The metal chassis feels like it can withstand a beating, even though it shouldn' t have to.

The driver problem is what I had been really concerned about. Looking back, I think I might have been better off spending double the money and getting the Digidesign Mbox bundle, which is tried and true with Mac-based film-production systems. Still, after some hassle, this unit now does work with my computer and is doing its job, so at least I'm finally getting my money's worth.

Easy to install, but a small annoyance, you must disconnect the cable from the PC after install (when the progress bar is at the bottom if I remember correctly) otherwise it's a juqu'à st glin glin

( the install will not be finished).

this is my first card.
MIDI files have motivated my choice.

I can not compare, but I find acceptable.
Did you find this review helpful?yesno
»
Read the 23 user reviews on the Tascam US-122L »

Published on 09/09/09
Tascam has tested all of their audio interfaces for use with Mac OS X 10.6 Snow Leopard, Apple's latest operating system.