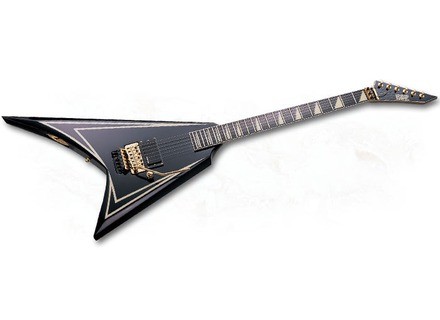 ESP Alexi Sawtooth
4
ESP has been making a lot of signature models for Alexi Laiho recently. I guess he has been a good seller for them. Alexi is the frontman for the popular metal band Children of Bodom. He was more known for his custom Jacksons but when they were stolen he switched to ESP because they were able to get guitars to him faster. This is the variant with cool Sawtooth inlays which from a distance look like reverse Jackson sharkfins. Other than the cool inlays it is a typical Alexi model. It has an alder body in the offset V shape. IT has a neck through maple neck with an ebony fretboard. The fretboard has 24 jumbo frets with the aformentioned saw tooth inlays. It has a locking nut up top with an original Floyd Rose down at the bottom. The pickup is a single passive EMG H4 with a single volume control.

These guitars are pretty comfortable even with their radical shape. The upper fret access is not as good as it looks. Even with the extra cutaway bit the angle of the shape is too broad so the upper frets are pretty deep into the body. The Floyd Rose is great and stays in tune very well. The back of the neck is unifinished so you get a smooth fast feel of the back of the neck. The top of the neck has an ebony fretboard with jumbo frets so you can get a nice smooth action when you play.

These guitars to not sound good to my ears. The alder body and maple neck combined with the passive EMG pickups produce a sound too harsh for me to find useable. The Passive EMG is like a passive copy of the EMG 81. It has a lot of high end like the 81 but without the full bottom end thickness of the active version. So the pickup just adds to the natural brightness of the sound. Alexi has a ton of treble in his sound so he likes this but for most people they may not like it. If This was my personal guitar I would drop an 85 in it. An 85 would thicken the sound of this guitar right up. but with the stock setup I do not find the tone very good at all.

Now that Jackson is making the RR24 I find it hard to recommend these ESP guitars to people. Unless you are a newer Bodom fan when you think of Alexi Laiho you imagine him playing a Jackson and the RR24 is pretty much the exact guitar he played. Its a shame it took Jackson so long to capitalize on this because they would have sold like crazy 10 years ago. The RR24 is better than this guitar as well since it has a compound radius fretboard it plays very well and the EMG 81 is fully active unlike this guitar. If you are an ESP can and can play anything else this is the guitar for you. If you are a Bodom fan you have choices. It is a good day to be a guitar player.
Did you find this review helpful?yesno
»