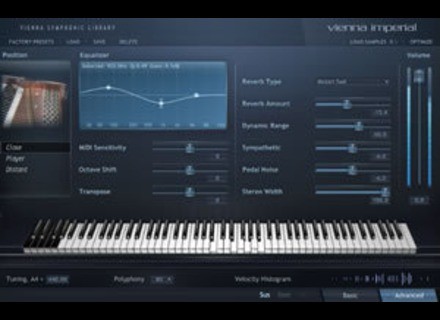 grotom's review (This content has been automatically translated from French)" Excellent!"

VSL (Vienna Symphonic Library) Vienna Imperial
5
DO NOT CONFUSE WITH IMPERIAL VSL Bosendorfer from the same publisher.
After 2 months of use I can not get enough.
Piano-based big bank of sounds that I have, namely Quantum Leap Pianos (EWQLP) Garritan Steinway Pro (GSP) is the only one that faithfully reproduces the nuances of the game, the velocity is natural (a hundred layers. .).
I let you see the features on http://vsl.co.at/en/211/442/478/1701/1305.htm
This is the Imperial model 290, the amount of samples is staggering (500 GB compressed into 50 ..). Note that the 11 additional bass notes are present .. it's missing a keyboard master of 97 buttons ..

A highlight is the release of resonance when the damper pedal is pressed, which clearly increases the feeling of réalisme.les sympathetic resonances are also simulated to note that they are significantly shorter than that of a real piano, n is not very serious and it is one of the few major flaws that I've been notés.L other is the default cpu requested .. he takes a big Bécanne to run it optimally, personally I am obliged to decline polyphony limit to 40 décrochages.Cela said it runs much better qu'EWQLP.

So yes this is not a Steinway Grand D, but the sound fidelity from the original is really good, there was a piano that has character and can really inluencer your inspiration.Une quality for some, a default to others ..

This product is not perfect, I can not get full marks but beware notes attribuées.Certains software in my opinion are overvalued.

30% off a selection of Vienna Instruments

Published on 10/17/13
Vienna Symphonic Library launches a two-week promotion, with a 30% discount off keyboard, percussion and choir sample libraries.