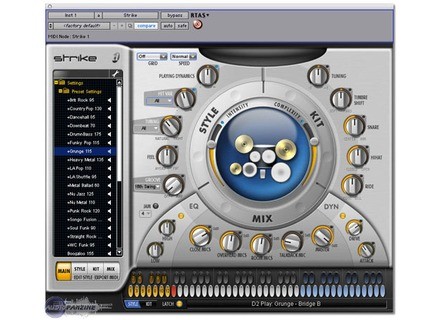 
1 user review
Find it in the classifieds starting at $50 Avg used price: $50

Digidesign Strike
4
Digidesign Strike was easy to install and I've had no problems with installation since installing it. I've also had no compatability issues with my set up. The software is pretty in depth and you can get a variety of drum patterns and beats from this virtual instrument. I've never had access to the manual but I wish I had one as I'm still trying to learn new things about this powerful drum software.

I have used Digidesign Strike on a Pro Tools HD 7.3 system. I use it with a Mac G5 and a Pro Tools HD interface with Apogee converters. I never had problems with getting good performance from this as I usually only open up one of these virtual instruments at a time. It probably get pretty slow if you had a number of these up at a time as it is a large program with a lot of things built into it. However, I don't think too many people would be trying to run more than a few of these at a time.

I've been using Digidesign Strike for about 8 months. The main reason I use it is to program scratch drums to hold the space before I have a drummer come in and play on top of it. The samples are pretty realistic sounding, but I wouldn't mistake it for acoustic drums. There is a bit of a learning curve involved as it took me a while to learn all the ins and outs of the program. It works great for getting a beat down and also has some pretty good sounding fills. There is a wide variety of styles and rhythms which adds to its versatility. While I like this program, I like Reason 3.0 a bit better for programming drums as I find it a bit easier to use. However, Strike is definitley a powerful tool and comes at a pretty cheap price.