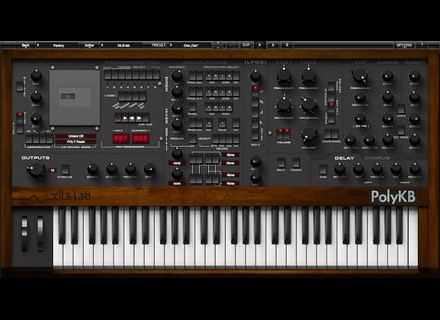 XILS-lab PolyKB
4
I use a Macbook with Logic 9 and Ableton 7, so far not a single compatibility issue.  Works Great!  I have not looked at the manual, actually, I'm not really sure if came with one, but,  like many of Arturia's instruments, it is a physical model of the actual instrument and there fore most all of the functions are right in front of you.  Most questions can be answered by studying up on the workings of an actual Modular Synth.

Well that depends on how experienced you are on Modular synths.  This thing was a little daunting for me, and still is to be honest, due to the massive amount of options and modules.  If you really want to use this thing properly, study up. The typical functions are very easy to access, they are all right in front of your face.

The software works great in Logic 9 and Ableton 7 as well as it works great as a standalone.  This software is very stable, it has never crashed on me nor has it ever failed to save or load a preset.
Well, this is obviously a digital representation of a beautiful Analog Monster.  If you are trying to compare it to the real deal, you will be disappointed.  But, if you weigh that against the fact that the plugin costs thousands less, makes damn good sounds and can go with you anywhere you take your laptop, it gets a 10 out of 10 for me.  I have been using this plugin for about 6 months.  I am still pretty much a novice at it, but spending an hour on this unit once in awhile will yield some great sounds.


The options are virtually endless and it fits right into my laptop.  What don't I like?  Well, its so large it doesn't fit entirely on screen.  Instead of creating a Scroll bar that you could operate via mac's 2 finger scroll option, or even the arrow keys, you have to click on the unit and drag.  Its not a huge problem, but when playing live, the former options would have been much better.

XILS-lab PolyKB
5
The XILS-lab PolyKB is an in depth software synthesizer, modeling itself after the RSF PolyKobol analog synth. It's got an interface that matches this synth, as it looks just like a real synthesizer on screen, which is something that I love as it makes me feel at ease using something that looks familiar. I wasn't involved with installing this software since I don't own it myself. There is way too much going on here with the make up of the plug-in to mention all of it in a couple of lines, so just take a quick look at a screenshot of the soft synth to get an idea of what I'm talking about. As always, if you understand the features generally associated with analog and software synthesizers, you should be okay here. One thing definitley worth mentioning is the morphing oscillator, which is a unique feature that kind of sets this soft synth apart from the rest. A manual would be a good idea if you're thinking that you might need some assistance or even if you're just looking to learn the software inside and out.

The studio that I work at has the XILS-lab PolyKB soft synth running on a number of different systems. All of them are Pro Tools HD based, but this will get used a lot in Logic as well. It definitely takes up a decent amount of processing power, but all of our systems are top notch so we don't ever have performance issues really. If you're going to be running this at home I'd recommend taking a look at the requirements to ensure that you'll be able to run it comfortably.

I really can't say enough about the amount of detail involved with the XILS-lab PolyKB. I haven't used original RSF PolyKobol analog synth that this is modeled after, but I don't have to do know that this is a great reproduction. It has sounds that could definitely be coming from an analog synth if I didn't know better, and an interface that matches up with the real deal. What more can you really ask for? I don't know what the price of this would be, but if you're in the market for a serious software synthesizer to use on an everyday basis kind of a thing, the XILS PolyKB is seriously worth considering. This thing is an absolute beast!
Did you find this review helpful?yesno
»

XILS-lab PolyKB manuals and other files