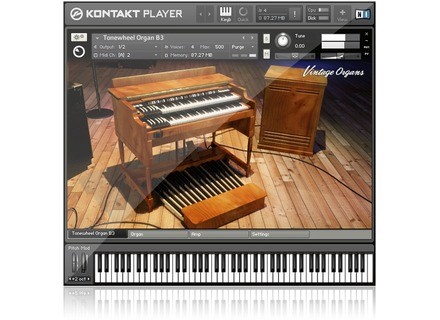 Native Instruments Vintage Organs
5
I run this in Kontakt 5 in Logic 9, Ableton 8 and as a Standalone program on a Macbook Pro i7 with an RME Fireface 800. So far, I have had zero issues with any of the instruments included. They all sound remarkably good and with my configuration can be run at 126 samples while still running a ton of other software. I can't stand latency and at 126 samples, I hear none. I have never reached for the manual for this sampled instrument set as it is pretty straight forward if you have used Kontakt before. Simply load up your library and select the instrument you want (I love the C3!!), maybe a preset if you care to, and you are off. All the expected controls such as tone bars, drive, leslie controls and such are easily found and manipulated.

A big thing I have come to realize is that with some libraries (Vintage D by Galaxy) there can be pretty drastic pops and audio drop outs when really getting down (lots of notes or sustain pedal holds). This library experiences none of those problems. Good solid sound that never waivers and I run a lot of software at the same time on my laptop. So far, it has never crashed, lost any saved presets (although thats more dependent on Kontakt really) and has performed flawlessly every time I load it up. I give this a solid 10 not only because it sounds fantastic, but the organ selection is great! I don't know any other C3 software out there off hand, and I was super excited to see Native Instruments make one. I have been using this software for about 5 months with more extensive time spent with it in the last month.

What I love most is of course the C3 I have mentioned. I also really like that they setup the sustain pedal automatically to make use of the Leslie on/off function. I also really love the Farfisfa and the Vox samples which are solid and unique. I should mention that the B3 is also exceptional, especially for any Blues/Jazz Gigs you may have. I guess I am a little tired of the B3 sound in general though as you can't escape it in a working studio. Honestly, I can think of anything I don't like about this particular sound set. It's simple, very well organized and cleanly laid out (as is usual for NI) and sounds fantastic. I have had the privilege of being around a real B3 quite a bit. To say this Library is just as good sounding would be a lie, but not a big lie. It retains a remarkable amount of the warmth, fullness and percussive attack you would get on the real thing and it doesn't way a ton. I have used several different Sampled Organs in my life most notable NI's B4 ii and GSi B4. I have to say that this set beats both as it not only has that B3 but the C3 as well. I highly recommend this to Kontakt owners. I definitely would make the same choice again.

Native Instruments Vintage Organs
5
I've been a big fan of kontakt for a while now. It's quick, easy, lightweight, and frankly NI has provided a very large and impressive collection of vsti for it. Vintage Organs is one of those vsti, and it features a sizable handful of organs, the highlights being 3 historic hammond models. Vintage Organs comes with a bundle of presets that give you sounds you might be familiar with if you're a fan of such recordings. Most of the presets are really good. They cover a lot of different vibes and styles.

I sometimes play keys for a large church worship project. Maybe 30% of the time I have to have organ sounds on tap. As much as I use that kind of sound, I decided to get Vintage Organs since I was already familiar with Kontakt. Right away I knew it was a good purchase. Not only can you get a massive array of organ sounds, but the quality is at a very high level. Sometimes it can take while to find the sound you're looking for if you aren't familiar with how an organ works. There was a bit of a learning curve for me because I know next to nothing about them. The manual is pretty helpful but I found messing with presets and controls at random was faster as far as teaching the ins and outs. After a couple hours I had a comfortable grasp of how to manipulate each organ well enough. I use some pretty classic sounds and I never get too crazy with it. My needs aren't too heavy. Kontakt as always is a good host and doesn't really get bogged down. Load times are reasonable.

As far as I'm concerned this is the best organ collection out there. The fact that it's in kontakt is just a bonus. The sounds are far and away better than anything I've used, as well as the presets and functionality. You get so many features. The cabinet options, the tone controls, and swells. All are very nice things to have. Well worth it.

Listen to the 12 audio files about Native Instruments Vintage Organs »