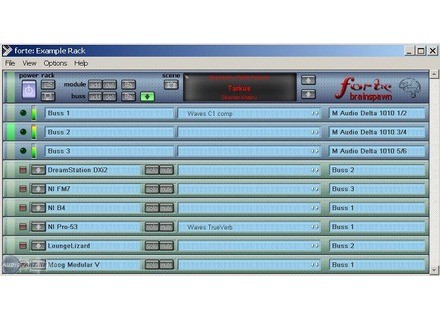 Baker street's review (This content has been automatically translated from French)

Brainspawn Forte
5
You will enjoy use virtual instrument scne?
DSIR you use soft VST, DXi, and stand alone at the same time on scne?
With one click, you have everything configured to your virtual instruments you wish samples containing prt employment?

Look no further this is the app for you!

- Installation is no problem it?
No problem with XP PRO. APRS purchase by the net you get an address for the soft Tlcharger with the code.

- The configuration gnrale is easy?
A breeze, the soft is englais and the record but the ball.
Beware though, the app only works on XP and Win 2000 (I think!)

- The software runs he correctly on this configuration?
A wonderful version 1.2 of the software does not have cpu meter but I felt no
slowdown of any kind with 7 virtual synths open

- What is performance? (If quantifiable)
Ben you wonder if it uses resources! I unfortunately can not tell you
the percentage used for no cpu meter!

- This software + hardware configuration is stable?
excellent and thankfully because I use the soft live

- How long have you use it?
A little over one month
It is for use on scne, I replaced all my synths and samplers hard by the virtual
and really not what this app even n&#39;tait not possible
The share ca purrs against my synths and dry will rot in my basement
but I have no regrets
Manufacturer, recycle quickly! invent your soft synths if there will be balance here must
in the coming years!

- What is the particular feature you like best and least?
least, nothing! the most? it&#39;s just great, you click on a virtual scene and your soft
employment are ready, click on another scene and a new vlan config virtual soft prt employment, grandiose
list of software that I use with the sounds that load automatically:
FM7 NI (two instances)
NI B4
53 PRO OR
BATTERY OR (2 instances)
Virtual Sampler SPEEDSOFT
NI KONTAKT (4 instruments on tracks 4 pm)
NI KOMPAKT
In addition it is possible to assign the output of each buss pluging several soft effect, in short I rept great!

- Have you tried many other models before acqurir?
bin in the genre there are few, I possde ASIO FX PROCESSOR SE SpinAudio but it&#39;s really not comparable and I tried V-Stack Steinberg and he did not arrive ankle.
This is also a box as dcevant steinberg, more V-STACK is heavy and consumes a lot of strong comparative resource. If I should note V-STACK from Forte for use on scne, Will Forte ben 10 and a V-STACK is to say!

- How do you report qualitprix?
Ben 130 Dollars the largest version, there&#39;s no picture is excellent!

- With the exprience, you do again this choice? ...
I almost want to buy a second!

If you try it, you can not do without!
Try urgently

December 2003:
I complte my opinion, are really dveloppeurs the costs of users with whom they follow-mail (in my case) for such a problem encountered or suggestions.

So since version 1.3 and now version 1.3a emerged with always something new such as a SETTING THE volume per module, the cpu meter is now Submitted in the soft and bug fixes back by users. and a lot more new features that I have not had time to discovering.

All new apps are coming out virtual rgulirement quickly set days and especially in FORTE, ss t the case for me with Steinberg Hypersonic n&#39;tait who ignored at the time of the notice with version 1.2, which is the version 1.3a.

For now I have a little pb with kontakt (for use with FORTE) which requires me to import samples from SHARP and not stand alone as I usually, however I do not bp of operating with kontakt and developers bchent on this problem now.

So I can confirm more than ever it&#39;s a great app for CONTRL and drive the virtual apps and plugins scne effect on, for me the best and certainly far ahead of some similar existing apps. And technical support is just fantastic.

Ha if I could be said of most other brands!

so I must be two, three months of use and more than ever satisfied!
10 + +
Did you find this review helpful?yesno
»

Brainspawn Forte
5
Installation without any problems on two different computers.

English manual only: Too bad, because even though almost everything is easily understood, this may not help them.

Warning: It's very hassle if you change the sound card route. Better be on your own before getting into the programming of your sets, otherwise you will have to redo all your splits (zones jartent settings at each change of sound card!). But apparently, this bug will be fixed on version 2 (it is in the 1.96).

The -: Challenges to the change in sound card (explained above), no support for VST GUI without clean (say bye bye to come with Cubase VST, for example) and still some incompatibilities (eg EMU PROTEUS X2 that you have problems with that CRER)

If the idea you said, forget about buying a TC Powercore card with Forte (and any other host for Plug'ins) because the buffers do not like Powercore audio below 512 and lose its effects concert, ca does not (my buffer are 192 and suddenly the Powercore suffers desync - Increase the buffer 512 to create too much latency).

I use Forte for VST instruments and effects to make our voices. This little world is then mixed into my sound card, which are also included bassist, guitarist and micro battery. The result: Thanks to the MOTU 828 ger that allows 4 different mixes sent to different separate outputs, I have a mixer just for me with synth and voice before (back in-ear), a mixer for returned my musicians, a mix for the public, and one for my mini-disc recorder. Since then we have recordings and concerts TOP repeat, almost like a CD!

Cheap prices, I do it again the same choice. That is, if you want strong control of intruments or hardware MIDI devices, it will also buy the software ECHO Brainspawn (as in my, this my last driver VIRUS RACK XL).
Did you find this review helpful?yesno
»

Oli_34160's review (This content has been automatically translated from French)

Brainspawn Forte
5
Use: live and studio synths (U20 and SY77 keyboards in control only) and guitar (Variax 700 + Behringer FCB1010 MIDI foot controller).

The installation runs without any problems and updates (frequent) can be done through the menu of Forte. there are some incompatibilities Vsti, as cited in the opinion below (Vsti no GUI) that can be solved by installing the VSTi host Chainer example. If not, the ones I use I have not found (Superwave8, CakewalkTTS1, MrRay2.2, B4, FM7, Vsampler3, Atmosphere, GlaceVerb, Juicy77,
JVM900, GR2, etc.. Setup is very easy. After the installation it configures its hardware, its drivers and audio inputs and outputs and noon through the menu. The manual is clear but only in English. But Forte is very instinctive, and reluctant to Shakespeare's language should not have problems ...

My config: Acer Aspire 1600 (HDD60go 7200 rpm, 1024MoDDR, P43.2), XPProSP2 and M-Audio Quattro Omnii + / A + Midisport4x4
It should be noted that it will modify the options.ini for users of Quattro http://www.brainspawn.com/forum/viewtopic.php?t=1391&highlight=quattro 2Busb% ( http://www.brainspawn.com/forum/viewtopic.php?t=1391&highlight=quattro%2Busb ) )
CPU consumption "empty" is negligible (less than 5%) and I does not save any stability problems so far. Be careful not to alter the quality of cooling your machine as there are peak demand loading of plugins that can destabilize your system. But that is not attributable to Forte itself. Live in condition, I spend driving noon (manuals and pedals) to control audio seamlessly, and even the two together.

I use Forte for about 2 years and I love its flexibility, its ability to route midi and audio without limits, applications for live use (this is its primary purpose), monitoring technique, his Frequent updates, etc.. I had tried other hosts (DSound, Chainer, VSTHost) who, despite their qualities n'alliaient not all the benefits of Strong (routing, split keyboards, detune, etc.).. Also, if you want to control the hardware is possible thanks to the plugin EHCO brainspawn well. So, in my opinion, soft to live with the plugins. And € 100, there's really nothing to do without!