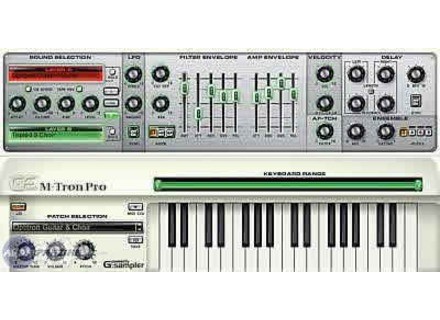 GForce Software M-Tron Pro
4
Gforce M Tron Pro is a virtual instrument that comes loaded with 3.5 GB of sound and you can use it on PC or Mac computers. On PC it will work with Windows 98, Windows XP, Windows 2000, and on Mac’s you need to have OS 10.4 or higher to run it as well as 256MB of RAM. You can run Gforce M Tron Pro as a stand alone or as a VST, if you use it as a VST be careful with how many times you are running it simultaneously because I have had some issues when running it more than 3 times on my PC. It does not happen often but from time to time I will experience some glitch stuff and slow playback, even when ASIO drivers.

M Tron Pro is easy to install and only takes a few minutes, when you load it up it opens right up. It has over 500 presets and each individual preset can be altered with editing the parameters which is pretty easy to do right on screen.

Some of the sounds are really good, I was shocked. But others are just ok, and I feel like some of the presets I have heard in other VST’s that came out around the same time as the M Tron Pro. For the price, you are getting a really good VST at 149 dollars. I have been using this VST as a Standalone as well for almost a year.
The price and the quality of some of the presets are more than enough to make you purchase this VST. I have used other Gforce products before and all of them are of quality and worth the buy. I am happy with my choice to use Gforce M Tron Pro. I have recently really utilized the MIDI learn function with all of the knobs and sliders on the VST. I know have them all synced up to the knobs on my MIDI keyboard for more of a realistic feeling synth.

Muh Nods's review (This content has been automatically translated from French)

Anecdote, is already using the first version of the M-Tron, but not recorded (before G-Force will implement an online registration system), I had to send a photo of my copy of M -Tron (box and CD) to prove that I was a buyer of soft, and I could benefit from up-to-date rate.

Manual as clear and well provided, including details on the various original mellotron used to make the M-Tron Pro, info for each sound, etc. pdf file.

M-Tron Pro is stable and low resource utilization on my little mac mini 2008. I use it mainly in Audio Unit plug-in with Logic Express 8.

Note some bugs however, when a sample is played backwards and the ranks of the pitch bend is fully (12), strange jaggies appear, and it is sometimes planted Logic. I do not feel that there was an up-to-date to fix this bug (but I&#39;ve never reported to G-Force).

Of course it is already enjoying the sounds of the original to find his account mellotron, because the whole point of the M-Tron Pro is precisely in these very special and evocative stamps, color saturated and degraded.

Compared to the first version of the M-Tron, this is no longer a "faithful" reproduction of mellotron, since G-Force added to its sample player (it was it in the end) for some function of extend the possibilities of synthesis (which nevertheless remain reduced): multimode filter (LPF, HPF and BPF with resonance), assigned to the pitch LFO, two ADSR envelopes and an excellent effect and effect section (a delay of all that n is reminiscent of the chorus of strings analog machines).

In the SOUND SELECTION section TAPE REV can play the sound backwards, and 1/2 SPEED bed the same sample twice more slowly, so one octave below. It can also shift the beginning of the sample with the ATT-T function to zap the first moments.

Note that the samples are read one-shot, as the original Mellotron: after 7 or 8 seconds, the sound stops. There are some sounds that are looped in hand, but not all. Sounds kind Optigan (optical disks) are played repeatedly, as in the original instruments.

Level MIDI control, the velocity is assignable volume and cutoff frequency of the filter, and the filter aftertouch only. The Modulation wheel (CC # 01) is assigned by default to the intensity of the LFO modulation to pitch.
Then each parameter (or almost) the M-Tron Pro is freely assignable to a Control Change message of his choice.

The whole is declined in two layers (A and B), and superimposed freely assignable to an area of ​​the keyboard. Big downside though: the keyboard is only 37 keys (such as the original Mellotron M400), it is not possible for example to make a patch with the A layer down his Master Keyboard 88 keys, and the B layer up! Which would have to take full advantage of layering and even emulate some models mellotron keyboards with two side by side (rhythmic Optigan left hand and right hand playable instruments for example).

If these additions are very friendly, it was soon felt that the M-Tron Pro has a little between two stools: it is not a faithful reproduction of the mellotron (with the limitations this created), but the possibilities synthesis are too small to make a complete player and flexible sample. No assignable LFO filter, no modulation matrix, no adjustment to tune the samples except 1/2 SPEED (yet read an octave above is very interesting for some sounds) ...

In addition, samples are "static" they are played as is. Out on a real Mellotron, there wow and sparkle of the band, the quality of the reading mechanism and the bands, or the special attack (the engine puts a little time to reach the maximum speed), which will make her even more unstable, and these little things are not emulated on the M-Tron Pro.
It would have been interesting to work on this instability, and the sonic degradation depending on engine / mechanism or state bands for example.

However, the quality is very good, the whole point of the M-Tron Pro is its mellotron samples that are hyper-many. All the classics are present, with a lot of sounds gleaned here and there (particularly via custom tapes of some musicians), G-Force has done a very good job. There are also sounds Birotron, Chamberlain and Optigan among others.
I even tried left by the expansion of sounds Vaco Orkestron a treat!

It&#39;s really inspiring, and this simplicity also allows you to go to the basics, fast play and be carried away by these mellotronesques atmospheres ...

I highly recommend for any lover of mellotron!

sonicsnap's review (This content has been automatically translated from French)" What sounds!"

GForce Software M-Tron Pro
5
I do not remember having struggled with installation and authorization (which is apparently not the case it everyone). No I-Lock, just a serial we must get via the internet.

Works perfectly as an instrument in Digital Performer on my Mac Pro. It does not look good processor intensive or memory ..

In fact, I bought this M-Tron Pro long ago (a good two years) on the advice of a friend. But not having immediate utility, I admit that I just forgot. I have only recently rediscovered, and what a slap! The sounds are just beautiful. It's roots (this is a little aiileurs what is asked), but it is warm and it is beautiful. Among the presets, there is a great amount of "artist patches" which are generally very interesting for once ..
The editing options are not huge, but most of the presets, generally composed of two sounds are as is. A multimode filter, an LFO, two ADSR settings velocity and aftertouch (!). A delay, always practical. But the best is the impact "Ensemble" which creates a unison détunables multiple voices. In small doses, it gives space and back, you get a sort of phasing Floydien very Pink. Try it on guitar sounds in particular.
Really, I am delighted to have this instrument and I wonder how I could leave so long forgotten. I feel like I'm going to catch up! Example: Try the patch "Quiet Reflection" Ben Hall, push "Together" at the bottom, with eight votes: Takeoff guaranteed!

Published on 10/25/08
M-Audio has announced distribution and imminent release of the new M-Tron Pro virtual instrument from its software partner GForce Software.