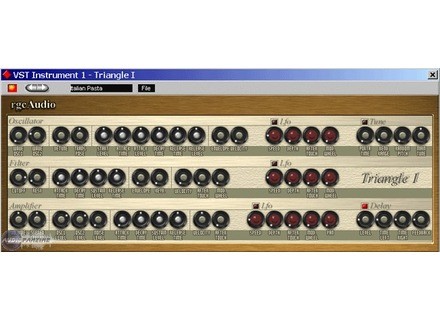 rgc:audio Triangle I [Freeware]
4
RGC Audio's Triangle I is a simple virtual synthesizer that is available for free. It's only available on PC as a VST based instrument as far as I know. You can download the synth free from a variety of sources, so if you're having any issues downloading and installing it I'd recommend trying from a different source and the process of installation should be a quick one. The interface of Triangle I consists of two separate oscillators, a tuning section, filters, an amplifier, and delay, as well as LFO sections for the oscillators, filters, and amplifier. Each section has a whole ton of different tone shaping parameters, so there is certainly a good amount of control available here within Triangle I. I think that they have a Triangle II, but I haven't used it so I don't know how it compares. A manual might be necessary for beginners, but I don't believe that most users will need it.

When I was running this plug-in, I was doing it on Hewlett Packard Pavilion dv8000 lap top that had a 3.0 Ghz processor and 2 GB of RAM. I was running the instrument in Cubase SX 2.0 for the most part, but later also ran it in Cubase SX 3. I was running everything through a MOTU 896 HD interface. I no longer run this plug-in as I run Pro Tools LE on a Mac, and this isn't available for Mac. This virtual instrument won't take up too much processing power if you run one or two of them within a single session, but if you want to run more of them it will really depend on your system. The nice thing about RGC Audio Triangle I virtual instrument is that you can actual disable unused features to save processing power...

While the RGC Audio Triangle I VI definitely sounds pretty synthetic and often times thin, if you kind of just roll with it you can definitely do some interesting things with it. Even though the sound quality isn't on par for a professional, where it lacks in sound quality it makes up in versatility. This versatility and the fact that it's free definitely makes it worthwhile for those users who are able to run it. This virtual synth won't be writing it's own chapter, but it certainly doesn't hurt to have it just in case.
Did you find this review helpful?yesno
»