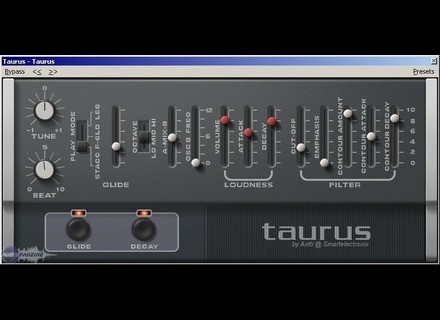 Smartelectronix Taurus [Donationware]
4
SmartElectronix's Taurus is a free software synthesizer that is available in VST format and for PC only. It's a software emulation of the classic Moog Taurus bass foot pedals. It's been a while since I had this software installed on my system, as I no longer have a PC, so I don't remember too much about installing the software. As long as you have a PC and a VST compatible platform to run the software with, you should be all set. The interface of the plug-in has a lot more controls than you'll find on the original Taurus, but that does allow for a lot more control, which you'll need since this doesn't sound nearly as good as the original Taurus. The interface has a filters and loundness (amp) section, as well as a series of other parameters to control a variety of settings. A manual shouldn't be necessary, and I haven't seen it if there is one.

I'm not running this software synthesizer any more, but when I did it was on a PC using Cubase SX. The computer that I used to run the SmartElectronix Taurus synth on was a Hewlett Packard Pavilion dv8000 consisting of a 3.0 Ghz processor and 2 GB of RAM. I definitely never had an issue running the plug-in in this configuration, as I never ran more than one at a time anyway. It's free, so even if you're unsure of how well it will run, you might as well try.

There aren't any other software synths out there that I'm aware of that emulator a Moog Taurus, and certainly none of them are free. While the SmartElectronix Taurus isn't the best possible emulator, it still sounds pretty good and can definitely give you some nice and deep bass synth sounds. I like how much control you've got, as it makes it capable of sounds that a Taurus wouldn't be able to do. Definitely do yourself a favor and give it a try if you're system will allow you to.
Did you find this review helpful?yesno
»