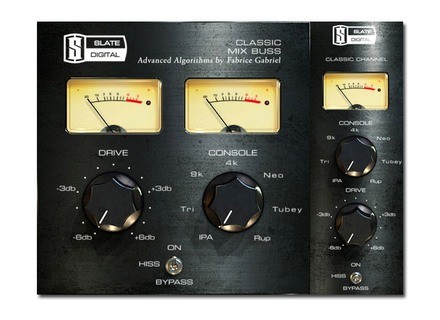 I have a Mac Pro i7 4770k with 32 Gb ram and an SSD. I can easily use an instance on each track and mix without any problems.
No issues during operation and everything seems stable.

I've been using it for some months. This small jewel has become indispensable and it's only second place in my plug-in chain (after VTM). Console emulations are very satisfying.
My favorites are API and Neve, the API due to its aggressiveness and clarity, the Neve due to its depth and lows.

Right now, its only negative point is the incompatibility with ProTools 11 and the AAX, which is still in development

To sum it up:
Yes, I would buy it again and it's only due to this plug-in that I still use ProTools 10 even though I have a ProTools 11 license....
Did you find this review helpful?yesno
»

Slate Digital VCC Virtual Console Collection
5
The Slate Digital Virtual Console Collection is truly analog! It comes with 2 plug ins and you can use them on a PC or a Mac and you will not have any issues running them as a VST, RTAS, or AU. Using these two plug ins is very easy because of the interface. They have given my tracks some depth and great stereo separation with minimal effort on my part. One of my favorites is the API because it delivers a large sound on my drums and makes them sound huge. I will not do many drums without this plug in anymore because once I started using it, there is no way I can go back to having my drums go back to how they were before.

Installing these plug ins was quick and simple. I have them on my Mac running OS X 10.6 and they have never given me any issues. I have not seen a manual for them, but learning them was not hard. The slate Virtual Channel has only 6 knobs and a few channels and channel settings that can all be edited and controlled. The Slate Virtual MixBuss has only two knobs and a group on/off switch. In order for me to really understand these plug ins I just had to start working with them and not be too technical. I was able to see immediate how both of them affected my sound. They brought color, depth, and stereo width to my tracks and I am very impressed with it. The price is very affordable as well making it a must have for anyone who makes music at home and wants to really put the finishing touches on their music.

I love working with the Virtual Channel and have it on pretty much every single mixer track in my projects. My computer can handle it with no problem because it uses very little CPU. It is a 64 bit plug in but can also be used in the 32 bit plug in form. With the four models (VCC) Brit 4K, Brit N, USA and Pi, it makes it a must have for anyone who wants to learn mixing or someone who is already solid at mixing and needs some good plug ins.
Did you find this review helpful?yesno
»

Slate Digital VCC Virtual Console Collection
4
Slate Digital Virtual Console Collection (VCC) is a suite of software plug-ins (single channel and mix buss versions) that can be used in a DAW. The software can be directly downloaded from the slate digital website. Authorization is down using an iLok2 dongle. Sometimes there are offers of getting a free iLok2 along with your purchase of one of the slate digital plug-ins. If you don't already own an iLok2, this might be something to look out for.
This plug-in was designed to simulate the sound of an analog hardware console. If you think your recordings sound digital/sterile then this plug-in might help your tracks sound more desirable.

Part of what makes an analog console sound different than mixing in the box (ITB) is that individual channels add a little bit of pleasing distortion (harmonics) and subtle compression to an input signal. VCC comes with a plug-in to be used on individual tracks to do just that. Another thing that makes analog consoles sound unique is the mix-bus summing. I don't understand the details of how analog summing is different to digital summing. I assume there is a little bit of pleasing distortion, subtle compression, and possibly some changes to the stereo field in analog summing. Whatever it is, analog summing is know to add dimension or depth to music. There are people that disagree, but in my opinion I like what VCC does to my tracks.

There are several different analog consoles to choose from: SSL, API, Neve, Trident, RC-Tube. To my ears, the Neve console is the most dramatic and adds a lot to drums and bass by thickening up the low end. It really makes the transients punch. The SSL and API models are more subtle and do different things to the mid-range. To get the best idea about the consoles (without purchasing the plug-in) you can listen to demos on the slate digital webpage or even download a demo.

One good thing about the VCC software is that the user can dial in just how much 'drive' or analog sound they want to add. Extreme settings rarely sound good in the context of an entire mix, but its all up to the user to decide.
Compared to other analog console modelers (Waves NLS), VCC has a few of the same models - SSL and Neve, a few different models - API, Trident, RC-Tube, and doesn't have an EMI model that NLS does. The Neve model in VCC adds more punch to drums than the Neve model in NLS to my ears. However, I think the SSL in VCC is more subtle than the SSL model in NLS.
Another difference between NLS and VCC is that NLS models hundreds of individual channels, with each console having dozens of individual channels. VCC only offers a single individual channel per console. If you assume that what makes analog sound analog is the fact that an analog console passes audio 'imperfectly' then it is almost certain that individual analog channels are all going to be differently imperfect. NLS offers the user more individual channels that are all a little bit different. This might also cause you a headache by forcing you to decide between channels that are all just a little bit different until you find the perfect one. With VCC you just get one channel per console, that's it - for better or worse.

The 2 plug-ins that it comes with are a remake of some of the best and most classic analog consoles ever made. Using this plug-in for your mixing will really bring your music to life. If you are on a PC you will need to have Windows XP SP3 or it will work just fine if you are running Vista but you could run into some driver issues down the road once you get some Windows updates. If you want to use it on a Mac you will need to have Mac operating system 10.5 or higher with at least 1.83 GHz.

Published on 11/29/13
Black Friday discounts at Slate Digital reach -70% on a selection of processing plug-ins.