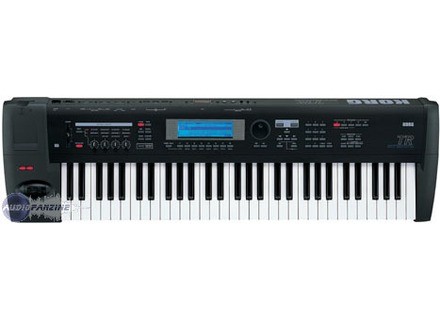 Tr 88, Workstation from Korg in the TR series.

Korg Tr 88
4
Most Korg workstations are great, and I really like working with them. When I got my hands on the TR 88 I expected a lot already without even using it yet. It didn’t let me down either. The Korg TR 88 sequencing is second to none and just the overall use and performance of this workstation is great. Accessing all of the patches and sounds is so easy and learning to sequence them and change the way they sound is just as easy.

Very simple configuration if you are already use to some of the other Korg boards. Korg keeps most of there stuff the same from workstation to workstation and they really don’t change to many things so its easy to understand for most of their repeat customers.

Sounds are really good, you will have a lot of sounds to experiment with for a long time and one thing I can say about this board is that you wont get bored with it quick. It will take time for you to use all of the patches and even better than that it will take time for you to go through all of the effects that the TR 88 can provide. There are over 60 I would say, effects that can be used right on board and will make every thing sound different if you arent into just presets.

The board is well built that’s one of the things that really sticks out to me, its steardy and strong. Doesn’t seem like it will crack or break if it gets knocked off the stand or knocked of the desk , workstation or wherever you will have it at. I have heard they have an add on to this unit that seems pretty good, I think its for sampling but I don’t do that often so I would never buy it. But I think it will cost over 100 dollars. Which is just what korg does, they always try to find a way to make more and more money. So that doesn’t make the price of the Korg TR 88 to good, once you have to think about the extra 100 plus dollars just for something that should be built on .

Korg Tr 88
3
This is a Workstation keyboard, so you have a variety of tools at your fingertips. It has a huge list of sampled instruments ranging from acoustic piano, electric piano, organ, world instruments, mallet instruments, tons of drum sets, sound effects and the list goes on. The idea with these keyboards if you have a sample for just about every type of sound you would want for production purposes (all though some are very unrealistic, I'll get to that). So with production in mind, they also put a built in 16 track sequencer. Very nice if you do not have that ability with another device, or if you have a quick idea you want to record (you do need a SD memory card to save you music which is not included). It also has the ability to build samples inside the unit and assign them to a key on the keyboard so you can play them during a performance. You can also sample external sounds if you upgrade and buy the sampling unit ($200). Its a bummer that you don't get the external option without upgrading but the internal option is great, especially if you do not have another device to do this already.
As for controllers you get Korgs one true genius innovation, the Joystick. It is so much fun and so much better than the seperate pitch and mod wheels. The cool thing is you can assign it to do different things like tweak filters or at vibrato. You also get an expression input, and sustain input.
As for connections it has three audio output options, stereo, aux 1, or aux 2. I say &quot;or&quot; because as far as I have figured out, you can only use one or the other, no combinations (bummer!!). It also has midi in/out/thru (nice) usb (for some reason it doesn't work well with my mac, it actually distorts the signal somehow, could be my computer though), SD memory card slot, Sustain pedal input, expression pedal and expression switch (tap tempo, effect on/off).
It has around 80 effects but most of them are the same effect stereo or with slight variations, but it includes reverb, delay, overdrive, ring mod, detune, phase ..... I think about every standard effect. Each effect can be edited and you can apply two per patch so you got some pretty decent options. As far as I can tell you cannot edit anything through a computer. The usb simply lets you play vst programs, at least thats all I could do with it.
This has 128 polyphony, more than you will probably ever need.

The &quot;general&quot; configuration is pretty simple. I was skimming through patches and playing withing a minute of looking at the keyboard and not referring to the manual. To use this things full potential will take some serious manual study, but that is to be expected with this many options. It comes with two fairly thick manuals and they are not to bad to use. Leaps and bounds better than some roland manuals I have had to use. I would say 75% of the time I had an idea of how to use this thing, I could figure out how to do it by reading the manual for ten minutes, the other 25% it simply didn't do what I thought it was capable of (i.e. upgrading patches without buying the sample upgrade). Almost all the sounds and effects can be drastically edited which is great, but I would not say it is easy at the start. You really need to consult the manual on how to travel through all the menus, but again, they are really helpful and clear. Infact, each effect (1-around 80) has a section in the manual explaining every option you can tweak.

This was my first leap into sampled music patches and programs and I would have to say it was a good beginners tool in the aspect of sound quality. I know a lot of Reggae/R&B musicians who love the sounds these make, but for most of the sounds I need better quality. As for realistic, I would say close, but overall no. The Acoustic piano patch is probably the biggest let down. It just really lacks in realism. I have played with all the options and still can't get it to sound even remotely &quot;full.&quot; Some of the world music instruments and mallet instruments are pretty cool, but most of those don't sound realistic either. The sounds I do love on this instrument are the pads. A lot of the synths are pretty cool too but the pads are the best by far. You can really get some dramatic ambient layers out of this keyboard. The arpeggiator is pretty sweet to for all the synth sounds, it really adds that &quot;dance&quot; sound to your arsenal. The expressiveness is pretty good. I pretty sure its about even with other keyboards in its range, but I wish the hammer action was a little meatier. It is almost too easy to play sometimes, I have had a lot of opportunity to play really nice grand pianos so I am probably a little biased, but I really have come to appreciate the resistance and hardiness of a real piano keyboard. I am currently on a search to find a really good weighted keyboard that comes closer to the real thing.

I have had this keyboard for three years. It was a great first step into sampled music, but I am ready to ascend that stair case now. The best thing is the amount of sounds you get in this machine, just about everything you need in a studio. The bad thing is that most of the sounds are not &quot;real&quot; enough. I have tried more models after I bought this than I did before, so now I know I should have shopped around a little and spent more money (i.e. Nord Stage 88, yamaha motif). I got mine for half of the original cost, which was a Great! deal, but like I said earlier, I wish I had saved up for a better unit. I am actually trying to sell this one now.
Did you find this review helpful?yesno
»

concombre68's review (This content has been automatically translated from French)

Everything is in terms of connectivity, MIDI, Jack, switch, expression, damper ... Many sounds, but in the end may be a lack of effects. We can grind sound, but ultimately it comes back a little still the same, sounds already being edited in that direction.

This keyboard is an excellent companion scene, but a friend in junior (home) studio.

Attention, he does not like the sun (info useful for outdoor concerts ...)

The basic setup could not be simpler: two banks, each of 16 categories, navigation wheel or numbers, arpeggiator and effects at your fingertips. Everything for the beginner and the average lambda (type I)

on the other hand, when it comes to go edit a combination of the trigger sequencer, arpeggiator to go to work, the sound of fiddling and save ... The more complicated it becomes.

In summary, 30% of the capacity of the beast is very accessible and well designed, but for the remaining 70% is another story!

The is clearly divided in two.

- The strings are dull, lack of natural terrain and
- The brass are very synthetic
- The woods are pale, except for Sax, who themselves are really good
- Acoustic guitars are drinking, their counterparts are amplified to flee.
- The acoustic keyboards are monotonous, does not separate from each other, and lack of chest.
- The E-Piano, organ, clavinet etc. ... however, are really good, and provided various

We can see the destination of the beast: this keyboard is born to electro. It will be perfect for a cover band with a keyboard effects, or a small group of components, which wants to enhance his sound at lower cost. In contrast, the acoustic, pop on speed, or solo, this keyboard is really not advisable.

I use this keyboard for a year, I tried before and after, everything is done on a keyboard (not even later this week in Frankfurt). He said at one point to a need I had, like keyboard scene in a cover band now it is less suited to my music, but it is nevertheless a beautiful beast.

What I like most is his exceptional feel, which allows the pianist to master that I am safely velocity.

What I like least is the big loss of natural sounds.

The report sumptuous quality / price is right, but with experience I would do no such choice.

Certainly, you will lose touch, but you'll gain weight of the beast.

In summary, it is just average.