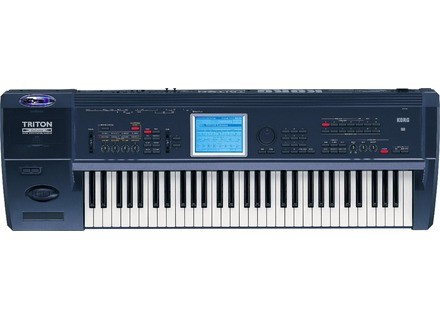 Triton Extreme 61, Workstation from Korg in the Triton series.

I have it for a week now so I tried to edit a few sounds and is fairly easy to create a sound it would suit you. You learn by keep trying everyday and master the Triton Extreme.
The Memory card, usb and memory upgradable is a big plus on the Extreme.

The effects on it are great especially with the valve power.
It can produce a sound that any latest keyboard even like the korg Pa3x would be jelous of.
The valve really gets the best sound out of it, you can hear the difference when that kicks in. The best sound quality on any keyboardyou will find for the price of today.
Will not be dissapointed.

Overall opinion a great piece of music equipment. Second hand was my best option.
I got it just two days ago but i have played on it before.
The only problem is the weight,it weighs a ton.
Any musician would appreciate the quality of the Triton Extreme.
When it comes to sound its the best and the touchview screen is an advantage even though I think they could have done a better job and made it a colour screen like the Korg PA1X.
The outputs are ok, many options on the Triton Extreme.
I am very pleased with it. A great piece of equipment and every musician I talked to before i got it gave me a top review for it. Highly valued among musicians.

Korg Triton Extreme 61
5
The Triton extreme 61 is a very powerful workstation, I remember when it came out and I got my hands on it I was shocked on how “perfect” it was. Out side of some of the sounds and presets I didn’t have a simple complaint about it. It is a powerful machine that can power your whole studio.

It took some time to get used to it. It wasn’t easy, for some reason some of the options and menu’s could have been laid out a little different to make it easier and quicker to use. Seems like they didn’t follow the model from previous Triton boards and created a different path for the Extreme. I had to use the manual several times, actually almost every time for over a month I needed to crack that manual open for something different each time but basically it was for something in the menu that I couldn’t find and didn’t feel like playing hide and seek with it till I found it.

The sounds are really good, some of the things that really frustrated me on some of the presets was some of them just had to many effects already on them. I don’t like a bunch of effects on presets because it sort of turns me off to it . I like to hear them dry then work my way up with reverb and everything. If I go to use a synth that is really spacey and has a lot of reverb I could actually pass it and skip to another one when in reality that could be a great synth to use if I would have heard it with less reverb.

Overall, one of the best boards on the market or atleast it was back in 07 or 08. I had a lot of good times with it while I had it, since I have traded it back in for other gear.

Korg Triton Extreme 61
5
I'm loving the sequencer. Sampling is a breeze. The Compact Flash storage is a beautiful thing, and makes transitioning WAV files to and from the computer a snap.

Pretty straight forward, and user-friendly. Huge manual to go through, and it's worth it if you choose to. You will have to if you want to get the most out of your purchase.

Feels a little cheap in the keys area. Holding up fine though. I may be nit-picking here.

Very good sounds in there. Many to choose from between Combis and Programs. Some are a little too synthy.

Great! It will definitely help you in your productions.

Korg Triton Extreme 61
5
The only thing this thing doesn't do is have a cd burner in it. Other than that its a stand alone studio.

As soon as you turn it on, you ready to go

The sounds are godly, i mena they will put you in another world

Did you find this review helpful?yesno
»
Read the 13 user reviews on the Korg Triton Extreme 61 »