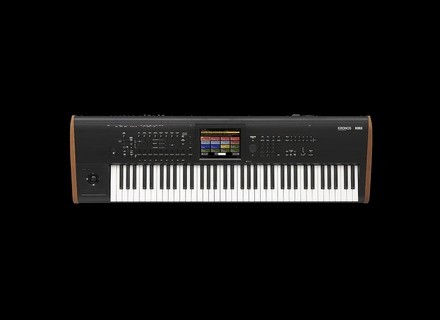 Korg Kronos 73 (2015)
4
I use the Kronos in a context where I'm getting back to making music after stopping it for many years.

In the past, I’ve played many keyboards of all kinds, including a Korg MS-20 in 1979.
The Kronos is the first keyboard I’ve bought since returning to music.
I chose it because of its capacities, the numerous videos about it and a great test about it on AudioFanzine’s French version.

I’ve ha dit for two months asof writing this review.
To sum up muy impression, it’s 99.9% positive as to its sound synthesis and processing capacities, as well as its sound quality (tweak it a little and you can really get it to sound big, almost analog-like).
Factory settings are good overall. There’s a large additional offer with excellent presets – even among the free offers. Some offer very cheap yet very high-quality soundbanks, such as coyote14 (https://www.youtube.com/user/coyotesynth/videos) who also offers very valuable tutorials). There are also more expensive professional soundbanks.
However, the most important remains to have fun with sound experimentation.
The 9 synth engines open the door to seemingly infinite possibilities.

Ergonomically, the synth is well-thought, especially regarding the way to access each screen. However, the file management system is very complex, sometimes even obscure.

As I’ve said I’m not a beginner, however this keyboard demands much, much time to be plainly mastered or even really usable. As an example, I’ve counted that the entire collection of manuals amounts to approximately 1800 pages!! Still, this comes with the feeling to have a particularly powerful keyboard.
An outstanding care has been given to these mauals. Beware if you’re not at ease in English though, as the 1200-page Parameters Guide is in English only, and this guide is a must-read to get into the core of the machine and consider mastering its entire parameters.
Hence, I wouldn’t recommend this keyboard to a beginner.

Alongside these manuals, I’ve used Youtube videos, the “Audiokeys” and “KorgForums” online forums.

This is undoubtedly a fascinating synth (or should I say workstation).

So why giving it 4 stars instead of 5? Because of the keyboard, which is the said “heavy” RH3. It being a heavy-touch keayboard suits my taste, as I couldn’t play a piano sound on light-touch keys. The keys are mobile enough to get a good velocity level on other kinds of sounds (such as organ, pads, solos &c) so no problem regarding that.
The problems are as follows:
1/ The noise generated by the keys . This question has been raised by many (not all) users. The keys are noisy at impact (which is rather normal), but they’re also noisy when released (which is way less). Consequently, the keys hardly get forgotten when playing softly.
2/ Bad calibration of the key’s velocity . The maximum velocity settings (120 to 127) are indeed impossible to reach, even when hitting very hard. The consequence with some layer-programmed sounds is that the last layer simply can’t be reached. Again, many users have reported that problem.
3/ Aftertouch : again a mechanical calibrating issue . It takes at least two fingers when pressing to start getting an effect – no matter which velocity curve is selected.

I could write a lot more on this awesome instrument. Is could talk about sampling or audio ins for instance, and the possibility to sample any external source to turn it into a sample that will be used as the basis for a nex programme, and so on.

This instrument requires to invest much time (especially in reading) to learn how to use it, but the pleasure it offers is well worth the time spent.
Did you find this review helpful?yesno
»

[NAMM] The Korg Kronos will ship in February