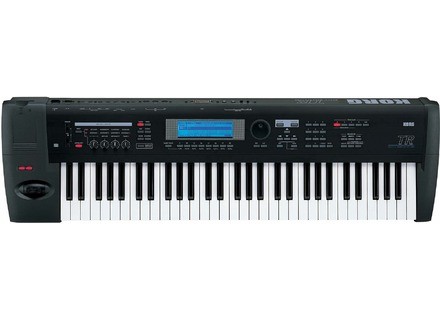 Tr 61, Workstation from Korg in the TR series.

Korg Tr 61
4
The Korg TR 61 is a digital keyboard workstation that has preset sounds for just about every keyboard based instrument you can think of. It has the ability to record and also has two pitch benders that are each in different form. It has a 1/4 inch output to send this to an amp, and it also has a 1/4 inch out for sustain as well as a number of other outputs for various applications.

The configuration of the Triton is pretty easy to follow, but there are a lot of different things to learn about using the Triton and can take a while to figure out all the ins and outs of this powerful workstation. This being said, it is quite easy to pick between the many traditional sounds as the interface of the screen is easy to figure out. The manual is sufficient and is helpful when learning the Korg Triton.

The sounds form the Triton are varied and are great for all types of music. It has your traditional sounds like different pianos and organs as well as a ton of different synth and pad sounds. All of the sounds are realistic and all sound pretty awesome to me. The Triton has a reputation for having a sound bank of great sounds.

I've been using the Korg TR for about three years and I have found it to be a great overall keyboard for both live and studio use. I would compare this to a Yamaha Motif, but it is hard to choose one or the other as they are both full in what they can do. I love the sounds the Triton has and it is pretty easy to use overall. The price is about right for a workstation of this type, and is probably not for the beginner because of this price. Overall, for the experienced keyboard player who wants a ton of sounds in one place this is absolutely worth a look.

Korg Tr 61
5
When you purchase the low end of a series, you can't expect too much for features. Sure, it doesn't have sound routed through a tube amp, or built-in RAM, or a sampling board, but it does have a large number of usable sounds, easily tweaked with knobs and a mod lever, a nice sequencer, USB built in, expandable sampling board and RAM available, quick access to sounds via category groupings, an awesome arpeggiator and external media slot for SD cards up to 1G. If this were a pricier synth, I would expect more, but at a grand, I give it a:

The first time I played it at the store, I felt it was easy to navigate through the sounds to check them out (right next to the Triton LE for easy comparison). Everything is clearly labeled and a decent sized display. There are a few unusual placements, but mostly for save/load features, and the more technical editing pages, which actually is good, in my opinion. I've played some gigs where people have come up to the stage area to look at my keyboards and accidentally hit a button or two yeilding irreparable memory loss, so I don't mind. The category feature is a little odd as well. I give it a:

This is an upgraded version of the Triton LE, and the sounds have alot to do with it. I've heard the LE's and they dont have the punch that the TR has. Many cool organs and electric pianos, to start. Orchestral sounds are nice, and one of the most expressive saxophones I've played. The word is that they used samples from the big daddy OASYS, and you can definately tell. For the price I give it a:

Seems to be built ok. The keys are kind of light, but it is a 61 key. The main parts are what appear to be brushed steel. The edges are plastic. As long as you are keeping it at home, or have a solid case for it you should be alright. I'd say it deserves a:

Oh, I love all of my keys, regardless of color, creed or religeon. This one will allow me to integrate a sequencer and sampler into my live rig at low cost, without dragging a bulky rack unit around the US. With the sampling upgrade, an additional 32MB simm Ram stick, and a modest 128 MB SD card, I'm only out $1335 USD. Add on to that if you don't have a damper pedal ($65 for a nice one) and stand ( you can get cheap ones for $30), and you're all set for under $1500. I love the sounds, portability and expandability.

Originally posted on FutureProducers.com
Posted by: higskies (January 2-, 2005)
Did you find this review helpful?yesno
»

jfhome's review (This content has been automatically translated from French)

Korg Tr 61
4
It's a Korg Triton with the 64 MB of PCM (either by double Thor Triton) but essentially the additional memory does a pcm for addition of an acoustic piano. We like it or not korg, but the piano from his lil brother LE is much better! (Note it was not hard to do better). But not in a pattern it seems to me

Well, the plain and simple. A Triton LE with only a few are better! make a choice between the LE and TR, for the price difference, it is better to TR.

The Korg TR is a good machine interresting, which I think is a good complement to the pattern. This fishing on some acoustic sounds really interresting but remains on the rest. Choice is better than a TR LE.
BUT THE card sampling, except I do not know if the TR the possibility of this extension.
Did you find this review helpful?yesno
»

The general configuration is not very complicated but needs to be understood.
Fortunately the owner's manual is very well done!
The editing and sound effects is quite simple (As The Trion).
The manual is clear and is accompanied by the guide parameters (very useful!).
The use of TR remains quite simple.Exepté few small adjustments that are well explained in the manual!

The sheets are fine and of a quality quite exeptional!
Some are taking surround sound and realistic (it could be film music)
However the sounds of violins, trumpets, and all other classical instruments not seem very realistic even if it is worked well!
the expression of sound is very nice, its sound changes depending on how you press the note or depending on the speed of the game

I am totally seduced by this workstation! The price / quality ratio is very good and it was worth the money! I'm not disappointed in my choice of synthesizer I am pleased with the TR!
Did you find this review helpful?yesno
»
Read the 11 user reviews on the Korg Tr 61 »