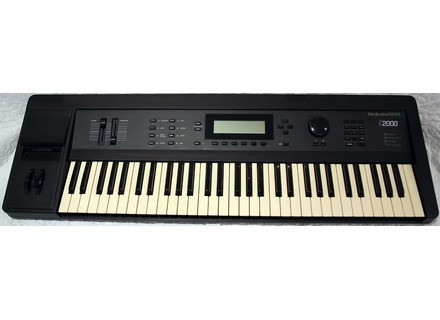 You will have full control over the patches on the Kurzweil K2000. The manual is clear and easy to understand, you will need to glance at the manual a few times until you get the flow of the keyboard down. It is set up different from other popular keyboards and plus with it being over 20 years old, there are a lot of changes. It comes loaded with over 200 patches.

The quality of the Kurzweil K2000 is one thing that you just cant deny, that is the best part of the board. It is well built and well design. You will have no problem using it, and its built like a tank. I have used a lot of Kurzweil boards over the years and they have all been well built. So anything from Kurzweil is a good idea to purchase. The K2000 is a great choice.

sonic75's review (This content has been automatically translated from French)" Single"

Kurzweil K2000
5
Everything has already been said ... I would add that it was time for the top (well almost)

The grain of this K2000 is closer to analog filters are amazing and the VAST technology really stands out from its competitors ... It is best for the sounds typed synthetic effects, evolving sounds.

For all plastic construction, the K2000 is very solid and reliable (the latest versions). I said that it is a very hard plastic and thick, not very soft plastic "chewing gum" machine entry and mid-range today ... The small black dot is that it gets very hot. Despite his age more than 20 years, this synth is still relevant due to its unique and inimitable grain.

tri.ton's review (This content has been automatically translated from French)

Kurzweil K2000
I will not mention the characteristic aidesans on for me mine has the map and the maximum sampling of onboard memory plus a fan kit. buy 350 euros with fifteen samples cd format cd player kurzweil more scsi. when I see the price displayed on AF, people should come down to earth ...

I use it as a second synthesizer for sound synthesis leads and other sheets, I must say that this machine is very admirable she surprises me, I think it still surprise me because every day I discover things, c is amazing it looks like it was made by aliens, and I can tell you that I had synth korg roland yamaha and others ..... We can do almost everything on this machine leads from the glittering sycros fattest!! passing through bels or other webs

sounds, which is acoustic sounds good! It's sounds time anyway, so they have more than 20 years. Defend well but that it is not only the reproduction fidelity of reports there is also the musical produced by the latter, I mean, that acoustic sounds k2000 when in put them in a sequence with other instruments played it sounds great, I think we can not compare the sounds with sounds k2000 present, but on the side of synthesized sounds then I can say that they can compete even with the best vsti, there is a section that I use a lot, I have seen anywhere in any case not as sophisticated, "comon" This part sets the portamento legato where as you wanted order to obtain a natural legato as an acoustic instrument, a violin, for example.

The only regret is that kurzweil could modernize its sound banks including maps and current rom because with technology the vast monstrous synthesis (which opens a wide field for the synthesis ..... hee) this device is very deep, you can go anywhere you can even go pick a sample that lies deep in the rom or ram have stopped the process of creating music, I regret, however, that for k version 2000 not to have multiple effects at the level of the machine I know that on other machines k2500 K2600 are not affected, but I do, the effects without really limite.mais with the advantages of ergonomics, ease of use, portability, keyboard very nice, the American brand (not just kidding!! Korean now) I considered the Rolls Royce of synthesizers.

Kurzweil K2000
1
All is said and repeated.
For the era it is very correct.

I noticed a good connection for the time.
At the time this is a synth that came out on fiber optics! it was pretty awesome (with SMP-K)

It is in the right, the edition is relatively simple, the manual comes with a little afraid this is a big book Frenchified evil! 100% as good synths of the era ergonomics is not there. Except that the K2000 is pretty structured, close enough to E-Mu actually.

Make its request from 10 to 20 minutes ... this is very acceptable!

Well ...
What about the sound is now not mistyped the time, some presets are absolement inaudible. The Option ROM, not better ...
Lacks punch, has a face for me SY77/99 the K2000 has not sufficiently dynamic.
The grain of the rest when even a little heated, I think it's a bitch that he is not completely fallen into oblivion ...

I still have a K2000, I do not use anymore, I repaired, and I must admit being surprised by the claque that it is taken this machine, the only way out of his guts c ' is to program your own sounds

Note also a system option, Sampling option, Option ROM card, Ram Option, Option PRAM ... yes ok very good! but hey what are you do not say is that the party option is not for everyone, need a good soldering iron, especially for the map and the sampling Kurzweil PRAM. This is simply unacceptable to weld on component leads and tinker 3, or 4 tricks to make it work ... berk (ditto for the extension PRAM).

The fate of a SCSI connector same as that of the parallel type, a lot have burnt their interface with JAZZ that used the parallel port!

Same synth very hot and needs a ventilator, which has the distinction of having an internal filter in the floppy drive, super annoying to clean when he took the dust.

Possibility of an internal hard drive, or too vague DIY nothing is really planned on the hull (to pierce by yourself)

food heater is integrated into the Analog Card, bullshit not to be apart! as all manufacturers are serious!

Upgrade the OS on Chip (ok for the time), except that the price is completely démesurer.

On some versions, the J-FET output slams none stop, disease K2000, a card called "coasting" was added for preventing the slamming of J-Fet. If you buy one, check the sound if you push the gain to the console, without the j-fet are slammed.

K2000 is a FET technology, fragile static and not always the best choice. manufacturing remains correct on versions 2 and 3

Did you find this review helpful?yesno
»
Read the 9 user reviews on the Kurzweil K2000 »

Listen to the 7 audio files about Kurzweil K2000 »

Kurzweil K2000 manuals and other files