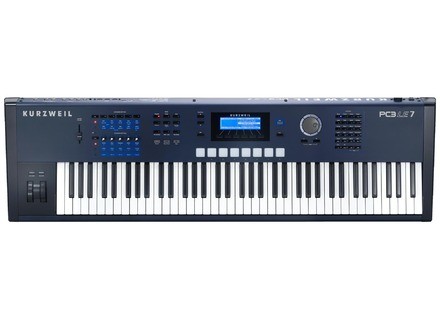 PC3LE7, Workstation from Kurzweil in the PC3LE series.

Kurzweil PC3LE7
1
See the manufacturer's website, there are all the necessary info if you are interested in taking it.
Many caractérisques but many are found as entering the synth.

No, no and no it has nothing simple about this synth workstation and at the same time it is really inaccessible, and I décu.Le manual is a real headache far from being explicit, I think it is the only synth that has given me so much wrong with the turn.

The sequence is simple and basic, but even edit sounds or effects, it must be very good as a sound engineer who has plenty of time to soi.Il must go constantly in menus and submenus, and I find Kurzweil have their own jargon and musical ca slows much understanding of the beast.

Otherwise there SoundTower software for PC3 LE but good luck, I find as difficult as the synth, to believe that it was not me destiné.Il currently difficult to assign these effects by Thousands are decommissioned and hard to spot with a tiny screen that take too much characters and not very classy especially in this period.

For sounds is a champion of worksation synth champion in the sounds it is the best it has jour.Je did not find any negative comments on all these sonorités.Que give it any style you want to do, the PC3 LE will fill you up and give you a lot of charm in any set.

I found in strong electric pianos, symphonic instruments, batteries, and especially the organ, there is a lot of realism in these banks, banks even dreams.

The guitar is average and the sax, they are the only instruments that have not taken me too, I forgot synths parcontre them they are really terrible as low synthés.J 'have even been fooled, I I was not expecting such power sonore.Je expect a synth sounds kind of cheap as we often hear in the workstation at this price, but this is the slap, it's really a very exciting beautiful collection of synths.

Especially since I had installed additional banks that do not cost too much, which made the PC3 LE even better.

The expression of the keyboard and its touch is very professional, there is really nothing to say otherwise would be a lie, I even think it's the workstation to propose such a record.

I put it a 10 for sound .. because he deserves even more strongly I would say is the only time I was filled with sounds.

I kept it with me a few months but despite its power I hastened to sell and I'm not ready to buy the Kurzweil.Je am disappointed its tangle, I think it is reserved for the pros or fans the marque.Je broke me with instruments that are rather easy to use as patterns or korgs, electribe electribe or not, but this is another technological aspect, saying that this is a synth in court large.


In any case I break or denigrates this product, this is not my specialty nor my temperament but I took the head for weeks (outside of my professional and family life) with this coded manual.

It is hard to master and those who arrived I say hats off, I think this is the only instrument that has given me so much trouble making pieces entiers.Il there has tutorials on the internet English and like I said above, Kurzweil has its own vocabulary musical.Pourtant even when I started in music I could have run old Roland MC 50 in a few hours, it is sequencable carefree but when that affects the sound is traveling through hell.

It's a shame because apart from its major flaws, it is a real diamond eternal booked a warned public but not for moi.C is a shame if Kurzweil simplify this synth would not only good for the stage, but for all monde.Peut-being that I love the intuitive or other products but now I am eager to get rid of it and I was happy that my buyer leave with.

I think this is the only brand to offer powerful and massive keyboards at once, but the only ones out products with inscrutable ways.

15 of 20 people found this review helpful

Kurzweil PC3LE7 manuals and other files