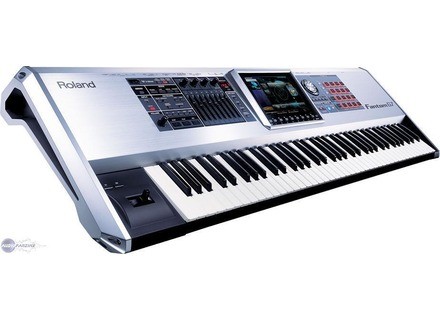 Fantom-G7, Workstation from Roland in the Fantom series.

A sound generator unparalleled
With its powerful audio processor, the Fantom-G provides new sonic depth and versatility unparalleled.
With a ROM of a two times larger than its predecessor capacity, this series offers the sounds of famous quality SRX.
But this instrument apart is its ARX connectors for memory extensions and new sounds "SuperNATURAL" produced by separate motors synth and effects. Super super SuperNATURAL sounds and the top

Roland Fantom-G7
4
To see the config keyboard manufacturers sheets, everything is said and all is as promised, I just regret not having chosen a Fantom G8 for its hit more pleasant

The affected G7 is for me too weighted by biensur against the keyboard is lightweight next to its big brother G8 weighs very very heavy, the heaviest on the market 88

Side polyphony nothing to say the keyboard manages seven layers of sounds without problem see 8 depending on the complexity of patches used, and c heavy! the bug is the lack of polyphony + uncommon, to really want lol lol

Next edition of the sounds of the c edition limitless! very very driven editor, can be too much, but super c, it takes a little fiddling the editor to understand certain things, Wholesale manual I have almost never opened, very intuitive keyboard, high-end interface, it seeks not too much, everything is under the eyes
Menu management by 16pads, genuine, how fast compared to fantom x

The acoustic piano sounds -> no! on the other hand you can load samples quality (free or paid)

I advise you to buy widely DP8 3 pedals (sustain, control 1 and 2)
for your Fantom G, very useful to control your instruments, very simple configuration

The electro sounds -> a marvel!!
The organ sounds -> a little work on the edition to get the sound you want (it is possible to install a program in which you add a fantom "organ pull" menu
Acoustic guitars. elec. -> Nothing to say
Strings -> very good!
and everything sounds (vibrations, flutes, etnic, ...) has nothing to say really good c

The library is HUGE!! the sequencer is titanic him 128 MIDI tracks and 24 Audio tracks, c frankly beautiful, there's plenty to do

I recommend this workstation as the people who work in the studio only to those who are on stage, the way LIVE & STUDIO can make this a real chameleon keyboard, ideal in the two areas

I used 3 years, super satisfied (except for a few negative points mentioned above)

I tried the range pattern that has not packed me at all .. except sounds, but next NOTHING TO SEE interface next to the fantom g

I recommend buying the ARX has OCCAZ price, it really boosts the keyboard

I sold it for the simple reason that I change the style of music, I do not do too much work studio

Roland Fantom-G7 manuals and other files