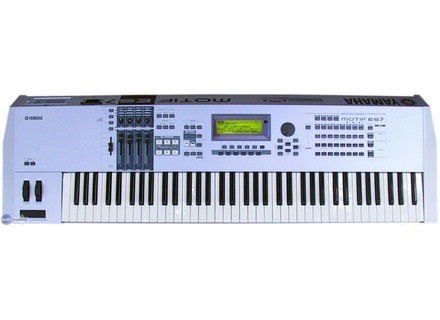 MOTIF ES7, Workstation from Yamaha in the MOTIF series.

Yamaha MOTIF ES7
4
The Motif ES 7 was a high end board a few years back and I still feel that It is today. There are so many keyboards and workstations on the market today its hard to pick one that you can really stick with. I love having he Motif ES in my arsenal it provides really good sounds and I love the brass and synths. I always get good tracks out of my music when I use some of the ES 7 sounds.

It was easy to use and I had to use the manual to figure out how to sequence on it. The sequencing on it just wasn’t good enough for me it was hard without being able to see what im doin. I am use to sequencing on software now so going from cubase and reason to trying to sequence on the ES 7 was really difficult for me. So now I just use the Motif as a so und module. Unless I am just messing around with some melodies on it then I might do some minor sequencing just to mess around and get some song ideas.

The sounds are great, you can really get a good sound with this board. It has some really good bass too, I probably use the bass more than any other type of instrument that it has just because I feel like this has one of the best bass presets on the market today.

Overall, this is a good board with good sounds on it. Enough presets to definitely get you up and running. The presets are song ready right away, so if you are a preset user you wont have to do too much eqing or anything because all of the sounds are really high quality and ready to go. I really love my ES 7 I wont every sell it either.

Yamaha MOTIF ES7
5
The features are pretty straight forward. it does what it is supposed to do. the remix function in the pattern mode is incredible though. it allows you to apply preset remixing functions to individual tracks in the sequence and come up with new breaks and variations that you might not come up with during normal playing. i would like to see a timing correct button similar to the one on the mpc that would allow you to repeat notes for high hats and snares in downsouth music

Hmmm, this is a tough one. i definitely wouldnt give it to a beginner, but as far as PRO machines are concerned, this is one of the easier machines to use. the interface is simple, but the screen is small and may be frustrating to new users. it took some getting used to in comparison to my triton or fantom, but it works

very durable. i never had to have it repaired, but the finish is painted on, it is not metal like it appears, so be careful when wearing big watches. also be careful with what you put on your hands, some common hand products can corrrode the paint finish.

The quality of the sounds in the motif are superb. they are warm and you can edit them easily if you know what parameters to change (or if you sit there long enough) the analog outputs are kinda noisy, but you can bypass this by purchasing the optional firewire output or the digital output card.

I love it! i just got reason (which i love) but now i love it more. its the best, it has a commanding presence in the studio even when its not turned on. I LOVE IT!!!!

Originally posted on FutureProducers.com
Posted by: the MAESTRO ( 8-, 2005)
Did you find this review helpful?yesno
»

Yamaha MOTIF ES7
5
It could have a more colorful screen. that green gets kind if boring to look at.

I found this easier to use than the triton. most people i talk to disagree. they think it;s the other way around. i taught my nepew how to use it in about 20 minutes and he made a couple of beats

This is thing is the best keyboard i've played. it got some tight sounds in it but most of the new sounds sound like the old sounds from the regular motif

My motif es7 hasn't messed up yet but i had a motif 8 and it keys kept getting stuck. that's why i don't like hammer keys.

i wouldn't trade it for the world.

Originally posted on FutureProducers.com
Posted by: illness ( 2-, 2006)
Did you find this review helpful?yesno
»

Yamaha MOTIF ES7
5
SS7 pattern
all is said above is

no, nothing is simple in this keyboard, apart from its banks already factory programmed
that was than done scroll to play

to read the manual must be made at least math sup

Briefly, a keyboard far too complicated for musicians who use their ear advantage
that the left hemisphere

sounds good nothing to say, it kills far and wide
ideal for the stage
the effects are good, but again difficult to edit

I think everything is good, brass pianos strings bass drums
in general we do not ask anything else to a keyboard

everything is realistic, the key is good
nothing to say at this level, I play international pop
I have all the sounds it sounds perfect c

I for 1 year before I had a pattern that I had sold 6 for the same complexity problem
and also because the keyboard is extremely sensitive
transporting it, it can break or simply uncouple keys! amazing anyway!

I tried everything, I just had the keyboard,
this is definitely the keyboard that sounds best for the scene,
for the studio, it also does

but it is also more complex and less accessible, even for savvy like me

worth its price considering the quality of the sound, but if you are novice, I advise you to think carefully before

Did you find this review helpful?yesno
»
Read the 6 user reviews on the Yamaha MOTIF ES7 »