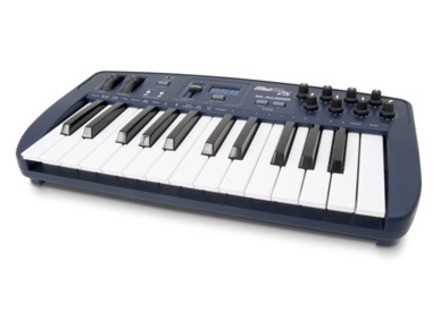 The unit also has configurable controls for your DAW.

The playing feel is a bit hard but I'm not a pianist and I'm used to playing light synths. I find the key action too deep and not convenient at all to trigger a drum kit for example.

I had problems with a key that didn't "bounce" back after releasing it, but I had it repaired for free since it happened after one and a half years of use and the unit had a two year warranty.

I never configured anything: I installed the driver and connected the USB. The keyboard was immediately detected and worked perfectly. I never read the user's manual.

The controls allow me to set volume parameters or zoom functions in Cubase or Logic. it's a nice feature even if I don't use it very often because I own a Nano Control BCN44. The difference is that Midair sends the DAW exact information and more precisely.

I've been using it for nearly two years and I've only had the problem with the stuck key which has already been repaired. I installed it on a PC and a Mac without problems.

The wireless operation is great: I can keep the keyboard over a cabinet or in a drawer. I take it back when I need it, I power it on and it immediately works (great when you don't have too much space .

It can be operated with 5 or 6 AA/R06 batteries and there's a PSU included (convenient since rechargeable batteries discharge very quickly, which can be very annoying when it happens in the middle of a project).

It's perfect for me.

Yes I would buy it again if I had the money (it's a small luxury).
Did you find this review helpful?yesno
»