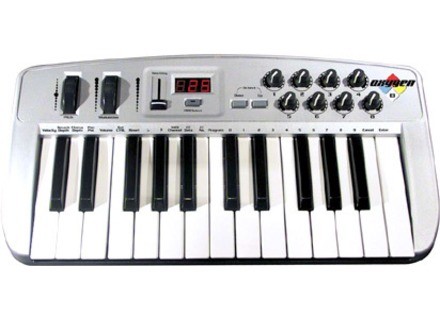 Oxygen 8, 25-Key MIDI Keyboard from M-Audio in the Oxygen series.

M-Audio Oxygen 8
4
I actually got this as part of a college program and used it everyday. I know it's plastic, but this thing is durable. The Oxygen 8 V2 is perfect for somebody that wants to make MIDI music on the go. Bring it to your favourite jam space just incase, it will fit easily on almost any desktop, use it to control your DAW or even hook it up to a synth and play on.

The set up for general use was very simple. On my mac I didn't have to install any drivers and I was able to use keys, pitch bend and the octave problem with no problems. Getting it to work with your DAW is another issue. Now I'll be honest, I didn't know much about MIDI keyboard/controllers when I first tried to get it to work. And I may have gotten frustrated and learned to live without the knob control feature. I found that I really didn't use synths in a way that required me to have the midi control so it was no problem to not have. Lets also note that the MIDI knobs are not infinity (you they have a limit to how far they can be turned either way. This means that when you try to adjust one of your on screen settings using the knob, it will automatically snap to where the physical knob is. This is a pain when you can't remember what exact setting you had had on before. When you adjust on screen it will change the value, however once you touch the physical knob again it will snap to wherever the knob is pointed.

I don't remember much about the manual. And unfortunately it's currently unavailable on the m-audio website. It is very similar to other competing MIDI keyboards so if you are familiar with those you won't have a problem. If you are still unsure there are plenty of videos on youtube to help you out!

The buttons are moderately easy to use. There are enough buttons to preform certain functions (sometimes you get units with lots of dual use buttons and things can become a pain when you have to a lot of adjustments). The layout of the keyboard is well thought out. The double stacked midi knobs definitely save some space compared to having them all in one row.

What I liked the most was the compact design. Granted, things have gotten smaller since the release. But at the time this was a lot more compact than others. I'll confess that I have accidentally dropped it once or twice, but the unit was fine with no noticeable marks. Unless it was a fluke this thing is not going to fall apart on you.

I can't really comment on MSRP because mine was included in a college program. However I've seen used ones online for around $80 and refurbished price of $85. At those prices the M-Audio Oxygen 8 V2 is an excellent choice.

The 25 keys were sensitive to pick up a fine touch and will not buckle if you hammer them. The key response was alright, without weighted keys what can we expect right? It would be nice if the keys were slightly lower to the surface it is sitting on.

This was my first model and was my only choice. I later moved onto a Novation Nocturne 49 but still keep my Oxygen 8 V2 in my work studio. It's one of those pieces of gear that I couldn't bring myself to sell. And it's good that I didn't sell because I end up using it all the time.

Cons:
-Keys aren't solid
-Knobs aren't infinity
-No beat pads
-The colour shows marks easily (something darker would be better)
-No DC adapter included
Did you find this review helpful?yesno
»

M-Audio Oxygen 8
4
Used it in college as midi input for Ableton Live or Logic Pro. I used it exclusively with audio software that processes MIDI input.

They had a few of these in my college that I had used.

This keyboard uses USB to connect to a PC or Mac, Midi works properly, no latency. It has a lot of different soft knobs that can be configured to different midi functions which can be very useful when inputting into your recording program. It is very lightweight and easily portable to wherever you might need to take it.

I wasn't able to figure out how to configure all the different nobs to the MIDI controls in the software i was using. But I only had usage of this in a college multimedia computer lab. I wasn't crazy about the feel of the keys, but that is just a personal preference. They worked properly though.

Well constructed. Built to last. Feel confident buying one used. Keys don't get sticky or have any other issues.

Try one out if you like the feel of it, get it. Its great for MIDI input to computers. Should work without drivers in Mac and some Pcs.

All the controls sync well with my software, Reason 2.5. I am most pleased by its portability- I have taken it on gigs in place of keyboards and used the computer to generate the synth- along with piano from an acoustic grand. It is easy to write into Reason 2.5, use it for temporary play, or generate the most awesome effects on synth sounds. I also like that it does not need an alternate power source- only the USB port.

I don't have many complaints, but the size of the board does limit its operating to 1 and 1/2 octaves. There is a button to depress for octave change. It is convienent, but sometimes I prefer having a little more space on the board.

The construction is top notch and it looks sleek and high-tech. The "Oxygen Tank" that I purchased with mine holds the module tightly and securely.

This is the perfect device for use with Reason 2.5 or any other music station software. Its simplicity makes it a breeze to control and create the music one desires. Its size is great for portability and the USB power enables you to work anywhere.

M-Audio Oxygen 8
5
I BOUGHT IT AT A LOCAL STORE. I OWN A AUDIOPHILE USB AND IT IS AWESOME.

I DONT LIKE THE FACT I DID NOT BUY IT EARLIER

STRONG, RELIABLE, LIGHT AND EASY TO CARY AROUND WITH A LAP TOP

This review was originally published on http://www.musicgearreview.com
Did you find this review helpful?yesno
»
Read the 25 user reviews on the M-Audio Oxygen 8 »