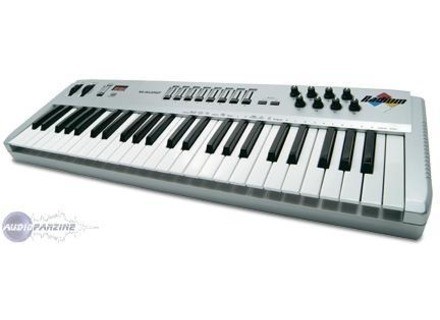 M-Audio Radium 49
5
The features are excellent for a controller in it's price range. 49 keys and octave preset buttons, letting you go -3 octaves or +3 octaves. The perfect solution versus buying a board with more keys, which equals more space. It has a pitch control wheel and modulation wheel, both of which prove very useful, and has a slider for data entry (volume). It is GREAT for when I'm recording in Reason and think what I'm playing is too loud or quiet, and saves time against turning and finding the volume on the sound module on the screen. Has 10 faders and 8 knobs, both of which are very responsive and feel great. I only wish the faders weren't flat, and were more switch like so they'd be easier to control precisely. It can be phantom powered through your computer or you can use a power block. I use phantom power, it saves outlets. The keys themselves feel nice enough. They're velocity sensitive, but as soon as you let go of the key, the sound dies. That's one of the unit's few drawbacks, but it's easily worked around.

Very easy. Plug it in, pop in the installation CD and it's very self explanatory. My only complaint is that the mod wheel is a little light, if it was weighted it'd be VERY nice. These are easily overlooked, though.

Overall it's built solid. I've had it for 2 months and nothing has gone wrong with it, and on the flipside it's easily moved from place to place because of its lightness.

No sounds; it's a controller - but the notes cut off once the key is released. Kind of a drawback, and the keys aren't weighted.

It's everything I was hoping it would be. Very responsive and it's just what I needed. Best piece of gear to start with.

Originally posted on FutureProducers.com
Posted by: smjVersion1 ( 6-, 2005)
Did you find this review helpful?yesno
»

M-Audio Radium 49
2
Decent amount of features here. If your keys happen to stick you can hit the reset button. The keys are not waited and feel very cheap and plasticlike. Which may require some getting used to. I honestly cannot stand the feel of it. Maybe others won't mind.

Easy to use Not so easy to set up. The manually actually suggests installing the drivers up to 3 times. That doesn't sound so good at all. Well, installing was kind of a pain. But after that everything's pretty easy to use.

I feel failure of some kind is eminent although I haven't yet had any problems after 2 MONTHS of use. The knobs feel solid for the most part. Everything else about it just feels soo cheap and plastic like. Due to the cheap plastic feal I would have a real hard time trying to tell someone that this is a high quality board.

Well, it gets the job done. If you're going for simplicity and just something basic I would recommend. For a new use I would highly recommend this. But after getting a feel for some of the other higher quality midi keyboards out there you're not going to have enough love to go back to this.

Originally posted on FutureProducers.com
Posted by: Esthetix (January 2-, 2005)
Did you find this review helpful?yesno
»

Yes it´s easy to use but many limitations

i don´t use mutch.....i´m still learning how to pruduce a good psy-trance beat.....i think it can last because the material seems to but strong...but don´t now yet..

Well at start i loved the sounds that it could play on Cubase on my laptop, turn on with batterys or usb....the most weak points i found was that it can´t play by it self only atached to a VST machine or a Sound Modelum and the must important it can´t creat patterns in side for playng....it´s great with Reason but i´m still discovering things...for the price it´s a great machine but as many limitations

after testing many things theres some limitations to producing... and the most important it doesn´t creat parttern in it....so i think it´s better for me to buy another one... maebe next time i test first....

Originally posted on FutureProducers.com
Posted by: soulistyce ( 1-, 2006)
Did you find this review helpful?yesno
»

M-Audio Radium 49
4
It has everything u need to make good music as far as keys tho. The only thing lacking on it is the keys they are very playskool but workable I actually have grown accustomed to them after having the keyboard for almost 2 years. The knobs are good and functions on the board are very self explainitory. My real only beef with this board is that the usb port does not send midi signals (atleast not on the one I have I hear there are 2 different ones)

Easy its a keyboard not rocket science

it has withstood the beatings ive given it without taking even a scratch and i bought it used which says even more about how strong this product is.

Ive considered grabbing many other boards but it hasnt happend yet this is old faithful and I plan to keep her around for a long time its not wifey material but she can get the job done until u meet her.

Originally posted on FutureProducers.com
Posted by: Xabiton ( 4-, 2006)
Did you find this review helpful?yesno
»
Read the 8 user reviews on the M-Audio Radium 49 »