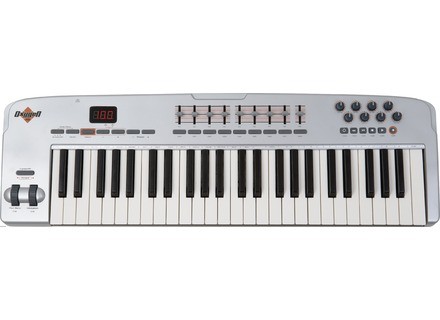 M-Audio Oxygen 49 (Silver)
5
What features motivated my choice was the 49 keys velocity sensitive , the mod wheels , the mixer build-in , the direct link provided with the product itself.

It has both type of connections , midi and pedal.

The general configuration and setup is fast , if your daw is compatible with the Direct Link mode provided by the M-audio series , you just connect your midi controller and you'll have it connected due to this great connection type.

The manual is consistent of good information and different types of tips and tricks useful.

The patch selection is very easy and fast.

The general configuration and setup as I mentioned is very easy , this type of product may be even used by children , it's very straight forwarded.

What I like most about it how cheap this product is , yet however the material which is made of is consistent , looks quite good , I like how the keys feel , I like the full daw support and the Direct Link mode which is such a great feature.

I like the way this midi controller is designed and that it requires a lot of space , so it's quite portable.

My opinion about the value for the price is great , I really think this is probably one of the best deals you could get for such an amount of money , this product combines great features with a cheap pocket , this product can be bought on amazon for just 120 $.

Precision and quality of the sound is very good , everything works as it should be on a pro level.
This product is used world wide even in top studios , the only bad thing about this product is that it doesn't have a drum pad , but no worries you can use the keys as a main drum pad.

Knowing what I know, I would buy this product again.
Did you find this review helpful?yesno
»

M-Audio Oxygen 49 (Silver)
5
The M-Audio Oxygen 49 is a basic MIDI controller that is USB based. It's a plug-in and play device, only requiring you to install a driver where necessary on a PC computer. There is a newer version of the Oxygen 49, but this review is for the original version. Obviously, it's got 49 keys to go along with a nice array of assignable MIDI parameters in the form of both knobs and faders. This is more or less than same controller as the Oxygen 61, as I believe just the number of keys is different. The controller has both pitch and modulation wheels as well. It's also bus powered so you can power it up just by plugging it into a USB port on your computer, although I believe you can also power it via a nine volt supply if you're not plugging it into a computer. Lastly, in the back it has a MIDI jack and a 1/4" connection for a sustain pedal.

It's difficult at all to get used to using the M-Audio Oxygen 49. The feel of the keyboard itself isn't great but it's suitable for laying down parts as long as you're not looking for the feel of a true piano. The nine sliders and eight knobs are all assignable to just about whatever you want, and it also has transport buttons which is always nice to have. It's got everything you need but at the same time it's not convoluted and it's very easy to use. I don't know that a manual is necessary at all here...

The M-Audio Oxygen 49 is pretty much the perfect MIDI controller for those on a budget. It's not too fancy and isn't at all the best of what's available out there, but it will certainly get the job done most of the time and actually has a lot to offer, especially for the price. I don't own this at home since I have the M-Audio Keystation Pro 88, but I've used a few of these before in different studios and they are definitely adequate. The price is the best part about the M-Audio Oxygen 49 as it's affordable for everyone and it's definitely a solid controller.
Did you find this review helpful?yesno
»

M-Audio Oxygen 49 (Silver)
4
I got this because I wanted a little MIDI controller and keyboard for my home studio. I wanted one that played fairly well as far as keys go, and that had some of the neat features like MIDI knobs and switches to control your software programs. This one even has faders on it which give it extra usability and a neat look. Also there's a mod wheel and pitch bend, which are great for giving performances some extra life. There are MIDI connections and also a pedal connection if you want that.

The action on the keyboard suits my needs. It is obviously not like a real piano, though, so if that's what you're looking for, look elsewhere. It has the light springy action that is common to a lot of keyboards like this. This makes it versatile for a bunch of different playing styles including using it for MIDI drums. You wouldn't want action that feels like a real piano if you're programming drums with it. It is very easy to set up and get going with this keyboard. All the controls are very easy to use and understand. In case you have any problems, the manual explains all the features well.

I've been using this for over a year now. I like all of the extra features you get with this in addition to it being just a 49-key piano. You can control all kinds of parameters in your programs with this thing too. It's faults are that it's hard to play piano parts that need a lot of expression well with this, it just ends up sounding fake a lot of the time. However for something like a synthesizer or other instrument, it well serve you very well. Also the faders on this are not automated, which makes them a little less useful. These are pretty cheap, so they are a good value if you want a MIDI controller to get you started at a home studio. I would make the same choice - it has served me well and all the keys still work!
Did you find this review helpful?yesno
»

Linn Sondek's review (This content has been automatically translated from French)" Well!"

M-Audio Oxygen 49 (Silver)
4
After using for a few months, the model KeyRing of the same brand, I started looking for a keyboard also offers control options for my recording software. To the extent that I was totally satisfied with the M-Audio keyboard, I stayed in the same brand as the Oxygen 49 offered exactly what I wanted.
The connection is effected by a simple USB / Midi and a socket for pedal is available.

Total neophyte on MIDI keyboard and even keyboards in general, the fact that I am satisfied with the touch will no doubt many of you laugh. Mias good, it is said, I'm happy!
The manual that came and did not say much for a beginner like me in mid keyboard turns downright obscure. I will not deny that the reading of lengthy instructions available on the manufacturer's website eventually to dive into deep perplexity! So I could not say whether the programming keyboard and midi controls themselves are simple since I myself am just not attacked! For control of cons ProTools is perfect through the various sliders and knobs present on the top of the keyboard. So much the better: this is why I changed my old keyboard.

My first keyboard was a M-Audio because I was satisfied with the audio interface of the same brand that I own. My second claver is also an M-Audio, but I do not doubt for a second that other brands offer excellent instruments of this type.
For me, the price / quality ratio is perfect: a keyboard and a controller for 115 €, that's what I found cheaper.
I remake that choice without hesitation.
If a generous soul will give me some explanation of the programs of this keyboard assignments, I will be forever grateful!!

Did you find this review helpful?yesno
»
Read the 6 user reviews on the M-Audio Oxygen 49 (Silver) »