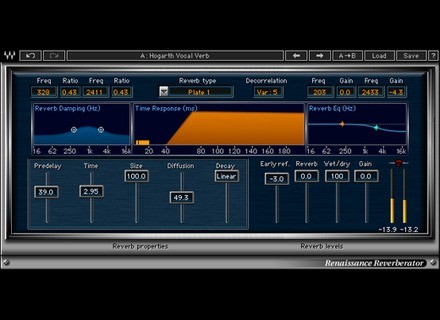 Waves Renaissance Reverb
3
I received this reverb plug-in as part of a bundle when I started studying production at Berklee in 2007. I would say it's been a steady, although not usually first choice, part of my setup since then.

I would say it's a bit much for someone who isn't familiar with the complexities of reverb. Being one of those people myself, I prefer a more simple approach and don't recall ever doing much tweaking to any of the many controllable parameters in this plug-in. I appreciate the straight-forwardness of the visual representation of the changes you make to your verb, but I think active listening is a better way to go when it comes to reverb.

I can't personally imagine needing such a degree of control over my reverb settings but all-in-all it sounds really nice and has some great presets that I trust for a lot of my work.

This reverb definitely performs well. I'm a fan of using the plate presets for drums and sometimes vocals. I usually work with this in Logic or ProTools and I always have to have my iLok plugged in to use the waves stuff, which is kind of a pain and also one reason I often go with other reverbs.

Like I said, I'm not such a tech junky and really don't bother with the extra features like the "reverb damping". I generally look for the type of reverb I want (i.e. plate, hall, etc...) and then tweak presets from there to get the desired wetness, pre-delay, and so on. That seems to have worked well enough for me over the last 8 or 9 years and it definitely hasn't decreased in capability or functionality in comparison to newer reverbs. I'm particularly a fan of the Waves stuff just because it doesn't ever cause any problems. I usually prefer, for example, to work with PSP plug-ins but they sometimes overload my system and a few are just too intense to load up more than one or two instances of them.

This is definitely a good-quality reverb plug-in. I'm not such a huge fan of some of the other Renaissance-Series items but this one is worth a look.

That being said, I don't think I would personally purchase this for the $150 asking price. If you're someone who is into having a ridiculous amount of control on your reverb settings this is probably for you but I prefer a more simple approach. I usually go with the PSP EasyVerb. It sounds great and the layout and features are easily understandable. It's also less than half the price.

I use this on my Macbook Pro (2.2 Ghz, 2 GB Ram) and I've had no issues at all with it. I use it on an auxiliary track with every session I do. This saves processing power; if I were to put this plug-in on every track however, I do believe it would slow down my computer quite a bit. This is to be expected with any sort of powerful plug-in such as this one though. As long as I keep it on one track or a few at most it runs great.

I've had it for about a year now and it is the only reverb plug-in that I use - its that good. Not only is it really easy to get a nice sound from it, but the controls are really in depth and useful. I've used a couple of reverb plug-ins in the past and this one trumps them all. While I haven't done this, I believe that you can download extra presets for it, a great feature that I will look into when I have a chance. Even though it is definitely a bit pricey, for me it is worth every penny. I've used an 140 plate reverb and the emulation of that on this plug-in is impeccable. If you are looking for a serious reverb plug-in, spend the money and get this; you won't regret it and you will have a great sounding reverb for all of your sessions. Worth the buy!

Waves Renaissance Reverb
4
Reverb is probably one of my favorite effects to really add depth to a mix. It's been a staple of the 80s LA studios, and it's works awesome on clean passages. This is a pretty powerful plugin, and there are a good amount of options. To me, this has just about the right amount of options without getting too out of hand. The plugin has the following features: damping controls for low frequency, low ratio, high ratio, high frequency, frequency band marker graphic per band and ratio, reverb types (hall 1, hall 2, room, chamber, church, plate 1, plate 2, reverse, gated, non-linear, echoverb and resoverb), decorrelation variation, EQ controls for low frequency/low gain, high frequency/high gain, band markers, pre-delay, time, size, diffusion, decay, reflections, wet/dry, gain and more. It's a pretty complex plugin, so if you never used something like this before, I recommend trying to either read the manual or finding some tutorials online. To use it, simply enable it on whatever buss you want to have reverb. I usually end up using some sort of Aux Buss and mixing it in.

I've used this with success very many times. In fact, I use this quite a bit for my more 80s-esque mixes. It adds some great depth to your mix, and you can get that awesome 80s LA studio tone with this plugin. Don't be afraid to use it on things like drums and other instruments where you might not think to use it on. It can really open up a mix and make it fatter. Just be sure not to overuse it.

Waves Renaissance Reverb
4
The Waves Ltd. Renaissance Reverb is a basic reverb plug-in that comes as part of the Renaissance Maxx bundle of plug-ins, in addition to being available as an individual plug-in. I've only installed this plug-in along with the rest of the Waves plug-ins and not as an individual, although the process shouldn't be any difference beyond the length of time it will take. The interface of Renaissance Reverb has a good amount to work with, but I wouldn't say it's convoluted or complicated in any way. For starters, the plug-in has a variety of different types of reverb to choose from, as well as two filters for damping and one as a general EQ. It then has a graph for setting the time response of the delay in milliseconds, and sliders for setting your predelay, time, size, diffusion, decay, reverb, early reflections, wet/dry mix, and overall gain. I didn't find that it was hard to use at all, so I've never seen a manual for the plug-in.

I've mostly been running the Waves Ltd. Renaissance Reverb plug-in on my system at home, but I move back and forth a lot between my home system and the studio's system where I work, so I've used it both in Pro Tools LE and HD. At home I've got Pro Tools LE 8 which I run on a Mac Book Pro that has a 2.2 Ghz Intel Core 2 Duo processor and 4 GB of RAM, while I run Pro Tools LE with a Digi 002R audio interface. I haven't encountered any issues on either system running this plug-in...

While I can't say that the Waves Ltd. Renaissance Reverb is my go to reverb plug-in of choice, it's still very solid and there's a lot that can be done with it. It definitely has a realistic sound to it, which is also versatile and flexible when you take into account all of the reverb types and parameters to go along with them. It's still not the most versatile reverb plug-in out there, but it's still a very good one. I don't think I'd recommend buying it as an individual plug-in since there are so many other options out there, but it's definitely one of the many reasons to get the Renaissance Maxx bundle of plug-ins...

Did you find this review helpful?yesno
»
Read the 5 user reviews on the Waves Renaissance Reverb »

Published on 01/08/16
Waves bring back their weekend special offers with discounted prices on three plugins this Saturday.