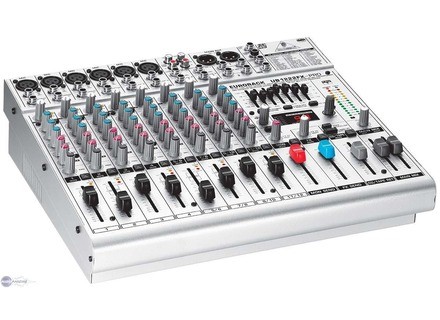 Eurorack UB1222FX-Pro, Analog Mixer from Behringer in the Eurorack series.

swaanparadise's review (This content has been automatically translated from French)

bioman666's review (This content has been automatically translated from French)

Behringer Eurorack UB1222FX-Pro
4
* Rackable, provided RULES.
* There are 12 channels (6 mono pramplis (4 IMP and 2 standards), Stereo 2-way switchable mono (practice) and a Stereo track (tape in) on RCA jacks. a hand out (Stereo XLR) and a return (mono jack).
* 3-band fixed EQ on each channel and 7 bands on hand.
* Effects Intgr.

Trs easy to use manual useless, falls well because it's a no pais ...

There are some features that make life easier: mute all (except the step in between) for switching between two songs or other ...

Among the gadgets: the XPQ ... advertised as "surround sound processor," the friends that did RULES intensity and I think (that means you mean a) it broadens the opening stro . Good. Since we use them gure qu'ne rpt. and that not quibble about the positioning of the masses stro instrumentals or voice ... I can not tell if it works too ... but having tried it once with rglages Stereo, resembles a porridge ... In my opinion it is better to be rgler even if the positioning stro need to give her a little depth.

Actually (read post on UB SERIES) the fader seem a little (well, okay: trs) fragile ... but just to be careful to ... the price we will not quibble!

The sound is neutral. I expected something dirty, but holds the road well trs.

There is indeed the breath of the headphones, but not on the Main ... will know why!

The effects processor is very practical for dpanner, but s'arrte l. There are the main types of reverb (room / ambient / flat / early reflections / spring reverb / hall), a compressor, limiter, chorus, flanger, filter (something that boosts the treble ... but a lot trs of course my voice) so can find something for live. Are also drums and effects that are nothing vinylizer (a + plop every second of breath!) Guitar amp (not ... WHY m'enfin, not a guitar for an effect ... spcial may be!) or exciting (no ide what did!).

Oh yes! a funny thing: you can not adjust custom settings effects. To compensate, I believe that every effect is available with more Settings, becaufe behr 99 shows effects while the manual and the inscriptions on the table does indicate that some thirty (type = 1 reverb hall reverb spring reverb = 5 room = 9, etc ...)

The EQ is not very effective (we can not cut off the low for example) but sufficient for the almost total use.

The EQ out of hand (7 bands) is a bit lightweight, and it included a fun gadget: the FBQ. Ahhh, but what the devil? the FBQ has the ability to indicate the frquences attachment (where the feedback appears) on the EQ knobs with a more or less brilliant loupiotte according to the intensity they are cut . But frquences cut with a 7 bands, even when just kill the sound!

The pramplis (IMP) trs are good for a mixer! trs transparent: I record with! others (those who are not stamped Invisible Mic Preamp) I did not test. Note: I dja input bass live in one of pramps and that's perfectly fine ...

I've had six months. It is very well for the price and for Premire mixer is a choice I do not regret! It perfectly fulfills the basic tasks. It is obvious that this is not a high end table (I think that it borders even when the mid-range), so it is better to avoid to record with, though made for a model, provided that it is more than enough to banish any interference intgre FX section, which induces a lot of breath and a feeling of amateurism irrpressible. But for 230 ...

edcool47's review (This content has been automatically translated from French)

Behringer Eurorack UB1222FX-Pro
1
Bjr, it's been 1 year and 6 months that I own one and blam .... more effect, more the power light beugue as we push the knobs is hard,,,, really behringer c ' is the m. .. more cordially

xav69's review (This content has been automatically translated from French)

Behringer Eurorack UB1222FX-Pro
5
Behringer, here is a brand-prone polmiques ... but these passions are demanding!
uli and if our country had to DCID like everyone else and sell their products more expensive 4 *?
it is true that a mixer effects internal ca 200billes to doubt, and yet, at the risk of contradicting the world, I think the quality of this table and even many other behringer products is more than good, very promptly potentiomtres air trs correct and effects, ah effects, it is on that are not worth anything compared those about by roland! oops bad example! because actually, the algorithms are the effects numriques behringer roland sign!
Well, rest assured we will, we can always criticize a brand wishes allmano-chino-esclavoise prfr because behringer is all about copying stuff that works cheap and therefore consquent tural studies no maps. Ah ba on it when the design was made by paul t, and stone, it is cheaper to jackfruit was the same thing!
I'll kiss all right I love this little brand and even those who dtest! @ +

It is a very simple little table!
full function and some funny Gadget
the manual is very well done

I have yet to see through Russian, it should not be very transpartente ...
-A com believe the other, I could dry my cheuveux tel'ment with blast and it introduced on this point, I confess I'm trsdcu, because if I had counted on it I still wet tif
, The equalizer is a lot of slices, the 7-band output is very funny with his sytme a flashing LED with sound, the concept is exellent, but not very useful on a 7bandes

I think it's great!
DJ is very well that it is cheap!
Did you find this review helpful?yesno
»
Read the 6 user reviews on the Behringer Eurorack UB1222FX-Pro »