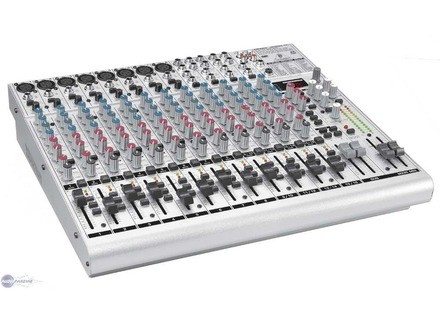 Eurorack UB2222FX-Pro, Analog Mixer from Behringer in the Eurorack series.

Behringer Eurorack UB2222FX-Pro
4
I purchased this unit off of E-Bay. I needed a mixer to mix down for recording.
I paid $195.00 for it. An exceptional deal.

Ease of operation and the FX are nice. The mic pre-amps are a very nice feature.

High quality construction. Made to be rack mounted or stand alone.

Very nice unit for the musician who demands the most for his money.

Behringer Eurorack UB2222FX-Pro
3
This mixer is not rackable, it is a small/midsized desktop unit. However, included in the package is a little rack-mounted plate on which you can put the mixer - so I guess it's semi-rackmountable. This mixer has 8 mono XLR inputs, and 4 stereo 1/4&quot; inputs. Each of those channels has an EQ strip with 3 bands. There are also 3 sends, a pan pot, mute, and solo buttons. This mixer also provides phantom power. There is also an input section for RCA if you want to input a CD player or something. There are integrated effects that you can send into the individual channels. These range from reverb, delay, chorus, pitch shifting, and combos of those effects. There are also inserts on the back panel. This is an analog console.

The setup is pretty generic and simple, so there is not a lot of new ground here. The only thing that steers from the norm that jumps out at me is the FX section. The FX are digital and built into the mixer. So you select which one you want to run, and you can then send that in various amounts to your channels. All the other normal mixer functions are easily accessible. I personally found the manual to be a little bit vague at times. It is not as in depth as it could be. However, most of the functions are largely self-explanatory so it's not a huge deal.

The console is not very transparent. Most of what this unit does sounds rather cheap, I guess because the unit itself is cheap. Sounds are brittle, small, and lack a lot of extreme high end that can bring a track to life. I definitely do not recommend this for recording. Noise tends to be a problem on Behringer products, and you can hear it as you push up the gain - another reason you maybe wouldn't want to use this in a studio. The EQ does what it's supposed to do, but again sounds grainy and not very smooth. The effects fall into a similar category, although a couple of the stranger ones sound kind of neat - such as the delays/reversal one which sounds like it could be used for scary movie whispers. A couple of the reverbs are not bad.

I have had this mixer for about 2 years. I like the very low price about it, and that it is reliable. The sound is definitely a weak point however, so I only use it for live things where a top sound quality is not necessary. I've used a good amount of mixers. If you are just looking for a workhorse mixer, not for studio use but for other things such as an open mic or for speakers, than this would be a good value due to the very low price. For my purposes, it hasn't done me wrong, though I do not use it for many musical applications due to the sound being second rate.
Did you find this review helpful?yesno
»

Mercure's review (This content has been automatically translated from French)

Behringer Eurorack UB2222FX-Pro
4
Good food rack analog (via late in mtale provided) with a practical novelty rather than anything else: Effect of a Intgr chantillonage bts/96 of 24 kHz. More than 99 effects such as reverb, chorus, delay, compressor, etc. etc ... vinylizer But do not count on it because it blows even when. It's just practice to see what happens. Otherwise cot sheet: 16 tracks in total, 8 Mono and Stereo 2x4. +48 V phantom power This table is Fidler Behringer without be the best tables.

Even used a fairly simple logic that any tables. Nothing special to say except that the manual is not rich but just enough trs. But one hour of time you Comprida all of its secrets.

Good sound, no distortion. Peak indicator is very practical.
The qualiseurs t appear to have reviewed and are quite efficient.

- A blast in the use of significant effects.
- Breath or parasite in the headphone output but not in the hand ... bizare ...

I did that for two weeks and although I take in my home studio.

Overall, Behringer remains faithful to him even without be at the top. Price quality point of view it is a good table trs and therefore a good deal for a home studio.
You do not take risk by adopting it.

APRS sudden complete failure of this table (nothing works), I live does make a change and as he no longer had the UB2222FX I am left with one that seems to be UB2442FX Pariel except that there is more track.

didmo's review (This content has been automatically translated from French)

Behringer Eurorack UB2222FX-Pro
4
16 tracks: 8 slices mono and 4 Stereo, 2 bus, and multi-effects 48v phantom Intgr quite convenient.
Each slice is complte with the gain, a low cut, an equalizer 3bandes semi prametrique prcis quite effective and a pre and post dpart fader, pan, mute, solo, hand routing and under group.

Was quick to understand how it works without using the manual limit poverty.
short, easy handle.

I t surprised by the enjoyable sound. My ear does not dcle blast on returns.
For cons, the headphone jack is all rotten with breath enough to prove the long run.

The multi-effect is quite convenient but it induces, depending on the program, a breath or pop numrique more or less important. Never really teacher, but it's a shame when even.

the equalization is also quite surprising in this price range.

I fell for its size Reduces its effectiveness in live as well as in-home studio and the quality of the equalization.
Shame about the headphones unusable.
Did you find this review helpful?yesno
»
Read the 5 user reviews on the Behringer Eurorack UB2222FX-Pro »