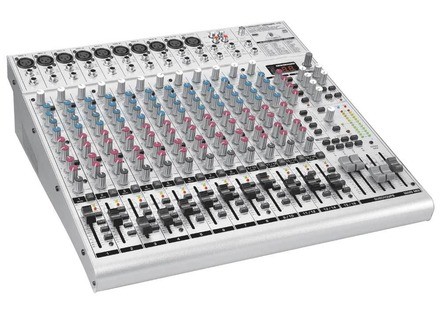 Eurorack UB2442FX-Pro, Analog Mixer from Behringer in the Eurorack series.

Behringer Eurorack UB2442FX-Pro
4
I picked up this unit after trading in my old mixer at my local music store. It was $569 CAD plus tax.

I like the preamps, and the way everything is mounted, with the knobs riding on the metal, and the potentiometers inside (built like a mackie!) By far the best part of this unit is the direct outs on channels 1-8. This is the only mixer I could find that had that feature in a reasonable price range. The built in effects are decent too, good enough for live use anyway.

The direct outs aren't balanced! Who's stupid idea was that? I run it into my Digi001 with 1 fotters and I can't tell the difference, but I would like to know who decided to make the main selling point UNBALANCED! Also, I wish they would make a version without the effects. Like I said, they are good enough for live use. But I own a recording studio and I don't need them. Lots of others feel this way too.

The unit is built tough. The faders are smooth, the detents at 12 oclock on the knobs are enough to let you know that it's not going anywhere until you turn it, and it is better than any of the other behringer mixers I've used in the past.

I wish that behringer would hire some people that speak english to write their english manuals. I have owned 5 behringer products over the years, and all manuals are ridden with typos, run on sentances, and in the case of the fcb1010 midi controller, it was useless.

Behringer Eurorack UB2442FX-Pro
4
It has all the features expected of a table, 10 XLR inputs with parametric equa, 80Hz filter, possibility of sub-group, mute and everything else. It is really complete the scene was all the options imaginable, and in addition it is rack mountable. I understand that users who are not poor ratings in the features sections, I have another table and yamaha soundcraft for recording and they do not have as much opportunity as this one, either in returns, distribution of high Speakers and settings.

For those who have used mixers, they will not feel in unknown territory, the other is true that there are many button.
The manual is clear, I read it.

I use it only for rehearsal and live, minimum 4 hours per week and the sound quality is very ample. I read a lot of problems among users of breath but I must say that the fan noise of other amps pass over. One thing is this is not a table made for recording in the studio, it's really dedicated to service. The equalization is effective, the effects are like those of other tables, it is not exceptional but ca troubleshoots to thicken a bit of percussion and voices

I bought it on occasion there are more than two years and I never had a poblème with, I am very pleased with this table for the price.
I have two other tables of good reputation that I do not go out live because not enough tracks (vocals, bass, guitar, percussion, synth and drums that did a lot of tracks) and not damaged and all the way the public would not hear the difference with the sound of the concerts

Boxtyman's review (This content has been automatically translated from French)

Behringer Eurorack UB2442FX-Pro
1
I bought this table for pro use. APRS two concerts she loose. Feedback, it must return to Germany for repair. THANK BEHRINGER! What I call a lack of respect for the professional musician. The next time j'achte MACKIE!

Simple jobs, if it works.

Well except for the effects of shit.

When it works well but it must be a better service av.
Did you find this review helpful?yesno
»

manpile's review (This content has been automatically translated from French)

Behringer Eurorack UB2442FX-Pro
4
Console is all
no problem for 3 months
Rack
damage the on / off phantom power and the back!

Correction blah ...
of breath yes ... but this price

Use for 3 months
quality unbeatable price
piti stop off the mark!
who can afford the luxury every time?
and operates does one tural values? rglages good and it works!

Did you find this review helpful?yesno
»
Read the 15 user reviews on the Behringer Eurorack UB2442FX-Pro »