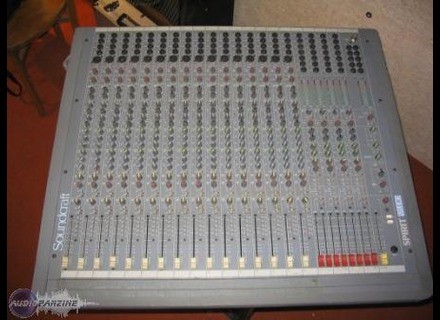 Spirit Studio 16/8/2, Analog Mixer from Soundcraft in the Spirit series.

Soundcraft Spirit Studio 16/8/2
4
Console in-line 16 24 or 32 channels (I have the 16 channels)
To 6 (2 pre, 4 post)
8 groups
4-band EQ with semi parametric
possibility of using the feedback paths of each machine to double the number of inputs (line level only)

everything is clear and comes to hand for those who can use a console.
to quibble, it lacks two things:
- Switch on / off the eq
- A switch pre / post on the (for the live example)

I like the sound of that spirit
the eq is more musical than surgery, but it's going
blow the preamp a bit more than the average

the sound is slightly colored, but rather warm, flattering enough

I use it for 13 years for my personal projects, while having worked on 02R, digitech, Midas XL3, mackie 8 bus and others.

Let's face it, this console is a bit down in front of the mackie 8bus. it is less versatile, a bit less effective ... But it sounds!

Mackie will say that's great for a Péchu with strong corrections, rock, techno, drum and BASSS ...

the spirit is more at ease if you are looking for a warmer, more intimate, to jazz, pop, funk, good sound trip-hop lounge

odhooghe's review (This content has been automatically translated from French)

The pathways include a four-band EQ, two variable frequency. This can be split into two parts (split EQ) to make corrections on both the signal (channel) and the return machine (monitor).

A Peak LED lets you view the risk of saturation, both in the micro channel in the monitor.

Connections of the multitrack machine made directly at the edge, a touch will manage the direct output pathway.

Group outings are visualized in 8 of 16 LED bargraph.

Groups can be reinjected into the final mix to allow a sub-grouping of instruments.

The Spirit Studio 16/8/2 also includes 4 effects returns with 2 band EQ. If the Spirit 16/8/2 is largely outclassed by the new generation digital console, it is nevertheless very ergonomic and easy to "fly".

Used in studio B NSM more oriented "sound research and composition", it has the extreme advantage of being able to convert to a console 32 channels, 16 returns machines being used as so many entries that can accept synthesizers, samplers and other "noise makers".

However, we prefer to mix on the 03D, which itself does not blow (oh, yes, analog is not that good!).

In short, the Spirit Studio 16/8/2 turns out to be a console rather ergonomic, easy to access but very effective.

Some owners of digital consoles have even said that the mixes made on this table were more statements (dynamic) than they have done on their equipment. But it remains to be seen (or rather hear) ...