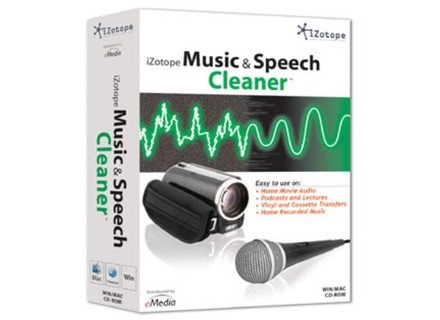 iZotope Music & Speech Cleaner
4
iZotope's Music and Speech Cleaner is another plugin for those who are looking for an easy way out of a problem that generally requires quite a few steps. Basically, this is another plugin for someone who's more of a beginner and doesn't want to deal with the hassle of removing background noise from an audio source file. The plugin itself is super simple in that there are different panes (reduce noise, reduce hum, reduce pops, enhance voice and enhance music) each with their own sliders that you can enable. To use this, simply open up the application, drag and drop the file you want to manipulate and click away. It's super simple to use, and anybody can start to use it without an issue. I never experienced any compatibility issues with this, so no problems there. I can't comment on the manual, but you can watch some video tutorials on this if you're curious. It's crazy easy to use.

iZotope's Music and Speech Cleaner program is rock solid. I never experienced any crashing in my OS (OS X) while using this application. iZotope software is usually fairly rock stable, so you shouldn't really experience any problems in that aspect. The application itself is 32 bit, and I'd like to see it move to 64 bit if possible. Soon, companies are going to stop making wrappers/junction programs that allow you to use programs like this in a 64 bit environment, so the sooner they convert, the better. Everything worked correctly while using this, so there were no issues there. It didn't suck up tons of RAM or processing power, and it shouldn't as it's not a very involved program. I've been using it for a few months, but I generally find myself using other things.

If I'm feeling lazy, I'll generally call up this application. However, I find that it's always much better to manually remove the noise yourself using various other methods. That could be because I'm so used to working in a DAW environment, but that's just the way I am. The program itself is aimed more towards beginners who don't want to deal with the hassle of opening up a DAW and manipulating the audio that way. It can work in a pinch, but it's just not a program I use often.
Did you find this review helpful?yesno
»

iZotope Music & Speech Cleaner
5
This program was not difficult for me to setup on my MacBook Pro. It's actually a relatively easy program to use, since you aren't really recording anything with it it doesn't take up as much RAM as say Pro Tool does when it operates. The manual ran me through setup quickly and easily. The functions are easy to use.

The software is easy to get started with, and I haven't had an issues with it not working as of right now. The software is definitely stable, more so than other programs like Pro Tools and Reason which have been giving me problems as of late. The performance I get from this program is fast and efficient. I've only been using it for three weeks since I started doing more work for my job, but I like it a lot already.

I really like the ease of use as well as the effectiveness of this program. It is fantastic at removing noise from almost any kind of audio file. I lately have been using it to clean up recordings of meetings for various clients. The tutorials that come up with each use make it pretty easy even for someone who doesn't know a whole lot about removing noise from audio to do it. It also makes vinyl and tape transfers sound much better, and it works at least as well as some of the more expensive pro tools plug-ins that do a similar function. I have received results that went from being difficult to listen to to sounding like they were recorded in a professional studio. There isn't a whole lot of cleanup you can't do with this software. I look forward to buying more iZotope products in the future, as this program is stellar.
Did you find this review helpful?yesno
»