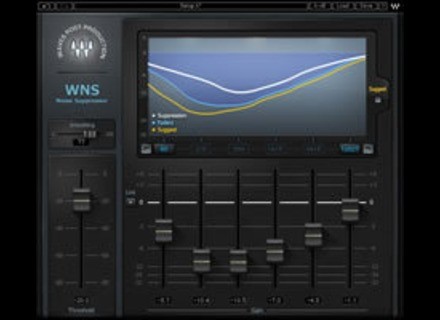 Waves WNS Noise Suppressor
5
As far as mixing my songs I go with using the Waves WNS Noise Suppressor a lot. I have used a lot of other plug ins that are similar to this one and they say that can eliminate unwanted noise and claim than can do all types of stuff that they really cant. They are really talking about the Noise Suppressor from Waves when they say those things. I havent came across a software plug in yet that can handle the task like Waves can. Some times when you record stuff and it might not even be music that you are recording, but you may have some unwanted noise in the recording or mix and using this plug in it cant take care of all of that without any problems. Especially if you are using a lower grade mic that can pick up lots of stuff while recording and maybe some fuzz. Use this plug in and draw those unwanted noises right out of the recording in no problem.

The best thing about this plug in is that it is just so easy to use. There really isn’t any need for using a manual and doing a bunch of reading. Everything is easy to understand from the start and you can start using it right away and I love when gear is that easy to use and you don’t have to use a manual to understand how to use it.

Waves WNS Noise Suppressor
5
The Waves Noise Suppressor has taking my mixing on my music to a whole new level. I have heard so much talk about the Waves plug ins and bundles so I finally decided to invest in some of them. I purchase this one about a year and a half ago and I have used it in every single project since the day that it got installed on my system. It is very easy to use and there really isn’t a whole lot to it that you can get confused with. But its just so good at what it does. It will allow you to filter out some of the noises or sounds that you don’t want but it can do it better than almost any other plug in because it allows you to zoom in. My standard fl studio plug in wont allow you to zoom in.

Installing was easy and it runs great on my pc. I have not had an issue with it and don’t plan on having one no matter what system I install it on. I use this plug in multiple times on multiple channels at the same time to filter whatever I don’t want out of drums and other vst’s.

But overall, The Waves Noise Suppressor is a must have if you are into mixing your own music. Most of us think that what comes with our program is good enough and we are able to get good mixes and just use the standard ones but untill you purchase this one you wont know what you are missing. This is the best one hands down and its not even that expensive either and you can purchase the bundle with all types of plug ins for your mixer track that will help. Waves bundles have really made my music crisp. Buy it.

Waves WNS Noise Suppressor
4
Noise is something that's inevitable with recording, especially guitars. While you don't tend to experience it in a purely digital world with modelers and such (meaning they don't actively induce noise, although they can produce it), recording high gain guitars will pretty much always give you some sort of noise. To combat that, you can either use automation efficiently or just run a noise suppressor. I've done both methods with success. The Waves WMS noise suppressor is a very solid noise suppressor that gives you a lot of versatility. In fact, it's more versatile than most noise suppressors out there as it's more meant to clean up the sound than to actually be a normal noise suppressor, although you can use it for either application just fine. Listing the features of this would take awhile, but you mostly have different sliders that adjust frequencies of noise that you're looking to cancel out. To use it, just put it on whatever buss you want to reduce the noise from. I've never read the manual, but Waves tends to have great support, so I can't imagine you being left out in the dust if you're having issues.

This is a very solid plugin if you're looking to reduce noise from the overall track, and I find it works great for that. You can really sculpt where you want to reduce the noise and clean up the overall signal. It works awesome for some of those older analog recordings you may have laying around. You can use it as a normal gate, but I find that you're wasting a lot of features when you use it that way. A basic gate doesn't need to have as many features as this has. If you have some recordings you're looking to clean up, check this out, and I'm sure you'll be surprised.
Did you find this review helpful?yesno
»

Waves WNS Noise Suppressor
5
The Waves Ltd. WNS Waves Noise Suppressor is a new plug-in from Waves designed to filter out extraneous noise for both mixing and audio restoration purposes. To date, this is probably the best piece of software to do this, at least that I have seen and used. It works in real time, so it makes it super easy to zoom right in on what you're trying to filter out. I wasn't involved with the installation process with this plug-in, as it was already installed at the studio that I used it at before I got there. The interface of the software is quite user friendly, while at the same time it is very in depth with what you can do with it. It makes it easy to zero in on exactly what you're trying to do. I don't believe that a manual is necessary, although I haven't seen it so I can't say too much about it.

Although I've only used the Waves Ltd. WNS Waves Noise Suppressor one time, I didn't encounter any problems in terms of performance. I ran it on a Pro Tools HD System, but even if you were to run it on a LE system or something similar, I don't think that you'll have too hard of a time running it. Like most users will probably be doing with this plug-in, I only used a single instance of the plug-in, and for this type of use I don't forsee too many people having issues.

The Waves Ltd. WNS Waves Noise Suppressor does its job better than any other noise plug-in out there that I have used before. It is definitely the smoothest sounding, but beyond the sound it is very easy to use. I typically don't need to filter out much noise as I used this for mixing rather than audio restoration, this is a very powerful plug-in to have around as you never know when you might need to do some serious noise filtering. The only down side to the plug-in is that since it is new, it does cost a great deal of money. For now, I'd really only recommend this to those looking for a top tier noise filtering plug-in for audio restoration because of the price.
Did you find this review helpful?yesno
»

Published on 11/13/09
Waves has announced the release of a new "Post Production" plug-in: WNS Noise Suppressor.