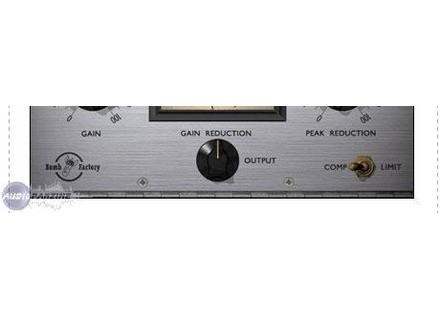 Bomb Factory LA-2A
3
The process of installing the Bomb Factory LA-2A Compressor wasn't hard at all and was as easy to install any other plug-in out there.  It only took a few minutes and I was able to use it and figure out even quicker.  Like the real LA-2A, the plug-in really only has two parameters.  It has two large knobs for gain and peak reduction and then has a switch to make it either a compressor or limiter and another knob to choose the what type of metering you'd like to be seeing (either gain reduction or output).  Even if you don't have experience with the original hardware LA-2A, this is as basic as it gets for a compressor.  I've never need the manual for the Bomb Factory LA-2A Compressor so I can't say if it would be helpful or not.

The Bomb Factory LA-2A Compressor won't take up much processing power as I find that I can run a good amount of them at a time.  I am currently running the plug-in on a Mac Book Pro that has a 2.2 Ghz Intel Core 2 Duo processor and 4 GB of RAM.  I run the plug-in in Pro Tools LE 7.4 that runs with a Digi002R audio interface.  I'm able to run a bunch of these at a time if I want so as long as you have a decent system you shouldn't have any problems with it.

While everything about using the Bomb Factory LA-2A Compressor is easy, I'm not a huge fan of this plug-in as a whole as I don't think that the sound quality does the original LA-2A justice at all.  It has a decent sound but doesn't sound nearly as good as many of the other compression plug-ins that I use like the URS Classic Compressor and Digidesign Smack.  There is also a much better emulation of the LA-2A out there made by Universal Audio that sounds much better than this one does.  So if you are looking for an emulation of the LA-2A or simply a good compression plug-in, I would look elsewhere.