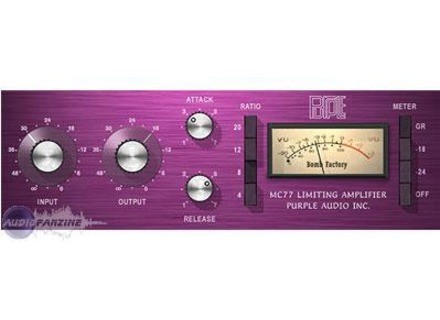 Bomb Factory PURPLE AUDIO MC77
5
I have owned about every compressor made. I do use this plug in a great deal and most of what I like about it is the extreme compression. Hold SHIFT and PRESS all the RATIO BUTTONS and then open up the attack and put a quick release on and BAM! you will have a extreme compression. I use this plug in for GUITARS, CLEAN GUITARS and it really shines on guitars. The black face is better for vocals. I pull this plug in up all the time for extreme compression and it works brilliantly. It is not intense on the CPU but I use an HD system and I have not tried it on my laptop. I will say that it is not a real difficult plug in to use and most of time I find it very useful on guitars and as a secondary or extreme compressor for that kinda of old school effect that you hear on spaghetti tone guitars. I also like that you can use multiple compressors and adjust them to different attack times and it creates a really nice effect for the voice or effect for guitar. The extreme settings are real easy to get use to and the unit can take a strong hit on the input stage. It takes a great deal to distort this plug in. I also like this plug in on an auxiliary buses for drums, that is the complete set. I use it for parallel compression for snare tracks and vocals and I crush the input and mix the crushed signal into the mix with the unaffected track and it sounds really good. More so than that black face 1176 for vocals and drums I think this has a bit better extreme compression effect. It is softer sounding than you would expect.

Been using it the week it was released and every since and I have had no issues with it ever acting up, slowing my computer down or in any way performing unstable or erratic. some of my engineers like it so much that I always notice that the first plug in on guitars and bass is this one.

Sound quality is a bit dirty but great for old school engineers. I like the dirt of grunge that this unit give you. BUY IT.
Did you find this review helpful?yesno
»

Bomb Factory PURPLE AUDIO MC77
4
The Purple Audio MC77 is a classic modeled compressor from Purple Audio. This classic compressor came out in the fall of 2003 and I have been using it since the early part of 2004 after seeing it in a magazine. I purchased the full “bomb Factory” Bundle for around 500 dollars and it came with Purple MC77 in it. Though the value of MC77 is no where near the 500 dollar mark, in fact it can probably be bought online now for about 20 dollars. The whole Bomb Factory bundle back in 2004 was worth that amount of money and after using it for about a year I felt like I got my money’s worth out of it. I had no compatibility issues installing or using this compressor. The general configuration was very easy and all of the functions of this plug in are easy to use and to understand so no manual was needed. There are only about 4 total knobs and everything is right on the main interface. There are no sub menus or anything else to have to navigate through, all of the text on the interface is big and easy to read.

I have used other gear/plug ins from Purple Audio and most of all the products they come out with work very good and don’t have any issues. This is most definitely the best compressor they have come out with in years in my opinion. I am happy that I have the MC77 though I didn’t purchase the Bomb Factory bundle for Purple Audio’s MC77. I was actually surprised on how good MC77 was. I thought It was going to end up being one of those plug ins that I wouldn’t use much. But I was wrong, it’s a good compressor that is easy to use and it is very stable.

Bomb Factory PURPLE AUDIO MC77
4
The Bomb Factory Purple Audio MC77 compressor plug-in was easy to install and the process was a pretty quick one. I had no compatibility issues with my machine and overall it runs smoothly without any issues. The interface of the plug-in is identical to the Purple Audio MC77 hardware unit, as well as Universal Audio's classic 1176 compressor. It has four knobs - one for input, one for output, one for attack, and one for release. It then has buttons to choose the ratio of the compression and also has options for metering. I don't have a manual for this so I can't speak to how helpful it is or not.

I am running the Bomb Factory Purple Audio MC77 on a Mac Book Pro that has a 2.2 Ghz Intel Core 2 Duo processor and 4 GB of RAM. I run the plug-in Pro Tools LE 7.4 with a Digi 002R audio interface. I have never had any problems with running this plug-in with this configuration, as I am able to run four or five of these at once if I wanted to. Overall, the MC77 is stable with my configuration.

I have been using the Bomb Factory Purple Audio MC77 for around two years. While I have found it quite useful, it isn't one my favorite compressor plug-ins out there. The sound quality is good and is great on drums, but it isn't the most versatile plug-in out there as it has a somewhat limited use in terms of what instruments it sounds good with. The price is reasonable if you can find it within a bundle, but is overpriced otherwise in my opinion. I would rather have a URS 1970 Classic Compressor or Digidesign Smack over this in terms of sound quality and overall versatility. The MC77 plug-in is definitely usable and is nice to have in my arsenal, but isn't my top choice by a long shot.
Did you find this review helpful?yesno
»